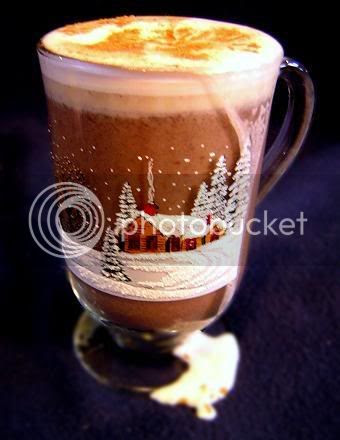 Forget milk and cookies, if you really want Santa to be good to you, leave him one of these- a Coffee-Chocolate drink spiked with a generous shot of Baileys. The more generous you are with the Baileys, the more generous Santa will be with you. If you really want to suck up, you'll leave him a Baileys infused truffle or two as well. The particular recipe for this drink came from the 1956 Constance Spry Cookery Book, which is a good read if only for its hilarious suggestions of when you would eat certain foods. Drinks were filled under “Shooting Party”. No, not an alcoholic shooters party, (that’s what I first thought of, maybe that’s just me) but an actual “Bang-bang! Animals die now!” kind of party. I love the 50’s… Since this recipe is so old, it serves as the perfect entry for this month’s Retro Recipe Challenge which has alcohol as its theme. Ok, so maybe the original recipe didn’t have Bailey’s in it, but the Coffee-Chocolate, (they could have come up with a better name) is an excellent wintery drink that is only improved with a good dose of alcohol.

Unfortunately for me, my parents were responsible and never let me have alcohol as a kid, (or coffee for that matter) but I suspect the former would have made for a more festive and friendly Christmas atmosphere between my sister and I. Every year when the Christmas decorations were being spread throughout the house, from out of the boxes would emerge two Santas. Each of us would get one of them to put in our room for the holiday season. The Santas, however, were not created equal. One was cool, the other was not. Guess which one I always got stuck with. I’ll give you a hint- it wasn’t the cool one. Every year I would try to steal the better Santa but my sister always won that battle. Have a look for yourself and see why I was disappointed with the Santa that decorated my room. 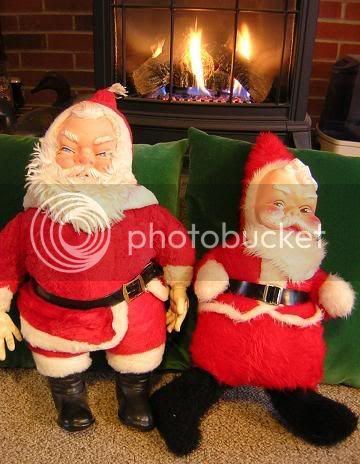 My sister hogged the nice Santa, you know, the one that looks normal. As opposed to my Santa, that would be the one with the wonky legs, his belt around his nipples and no hands! What kind of Santa was that??? He doesn’t have hands! He’s like an out of work B-list celebrity Santa impersonator. He probably doesn’t even know the reindeers’ names. Jerk. My pleas to have the real Santa, if only for a couple days, went unheard. No matter what kind of scene I made, my sister always got the better Santa. She was older, she did what she wanted. Clearly, I didn’t stand a chance. 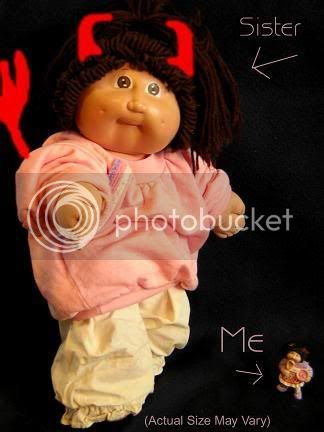 It’s hard to make a cabbage patch doll look sinister. I did my best.

You’ll be happy to know, that the Santa sharing issue isn’t a problem anymore. I’m bigger now, I don’t live with my sister, and I always get the good Santa. He likes me better, I give him Baileys.

Mix 1 pint strong black coffee with 1 pint milk, sweeten and pour from a height into a jug. Keep hot. Melt 2 bars of unsweetened chocolate with 2 tablespoons cold water. Boil 4 cups of milk with 3 tablespoons of sugar, and chocolate and vanilla, and pour from a height into the jug containing the coffee. Beat till frothy, serve with unsweetened whipped cream on top.
**When I made it, I scaled the recipe down to make only one big mug for me. I used Mexican chocolate in place of the unsweetened, and of course, a large dose of Baileys.

Sooo Cute...I can't help smiling whenever I see your pics for this post.

Whatdaumean? Your Santa was the smart one, he wore mittens to keep his hands warm!
Anyway, I'm with you on the Baileys and the choco coffee!

Delightful post....sisters are like that. Especially the older ones! They are really both cute Santa's.........give them some Baileys....they look like they could use a drink!

oh what a cute post and photos! Yes, I enjoy little alcohol on wintery food and drink. You'll see me dress up as Santa and come down from your chimney this Christmas, hehee...

does this mean that Santa is drinking and driving? no wait, he has reindeer to drive for him...this post is so cute!

Gorgeous post! I had a great giggle, especially the bit about his belt being around his nipples! hehe
Oh and I so sympathise, I have an older 'devil' sister too!

Is it bad to crave this early morning! I did not have a sister but 2 older brothers and pretty much whent through the same torture with toys!
May I have 3 mugs please? all for me...hehehe!

HAHAHAAAAA! Everyone else is saying how cute your post was.. and here I am, tears streaming down my cheeks, with my hand over my mouth trying to muffle my laughter here at work. That picture of the santas was TOO FUNNY. I'm still LARFING! I thought I was the only person who used the word, "wonkey" haha! And the belt around his nipples?? HAR!! Oh dear God. I need to step away.. I can't stop giggling. You. Rock. :D

That's one hilarious post. Got me laughing so hard! Thanks for cheering me up. :)

The cabbage patch doll work is really cute. I mean funny cute and so is the santa with wonky legs and belts up his nipples! lol. See? I'm still laughing...

Coffee chocolate is making me crave for some:))I don't have sisters but a brother:(

Nice pics of Santa! Have a great weekend Brilynn:))

Anonymous said...
This comment has been removed by a blog administrator.
12:56 p.m.

Oh I love the cabbage patch pictures! They are just sooo cute :)

I am laughing so hard, tears are streaming down my cheeks.

I do love your blog, Brilynn.

OMG - never mind Santa, I'M coming down the chimney to raid your kitchen if that's what's on offer!!! There can surely be no better combo than coffee, chocolate and cream.

Love the post - and your description of the wonky Santa :P

I can't stop laughing! That's one of the funniest posts I've ever read.

And I am so glad that you get the good Santa now. You deserve it!