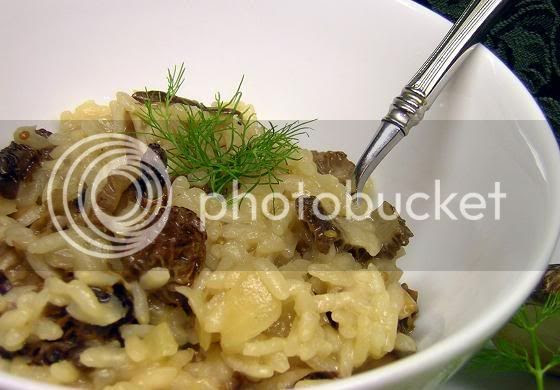 Donna Hay has gone Italian. The theme for Hay Hay It’s Donna Day #8 is risotto and is being hosted by il Cavoletto di Bruxelles. Risotto is relatively new for me, it always seemed like something that was hard to do. I knew it was good, but I thought it was out of my league. Let me set the record straight right now: Risotto is NOT hard to make. True, it takes time, but it’s not difficult. If you can stir, you can make risotto. It’s all about the stirring. Anyways, this is my second blogging event where I’ve made a risotto. The first one was for the “Take Two” round of the Monthly Mingle, hosted by Meeta of What’s For Lunch Honey. I made a butternut squash risotto with zucchini and sage and thoroughly enjoyed it. I previously hadn’t done much cooking with sage, but I really liked it. This post has nothing to do with sage. 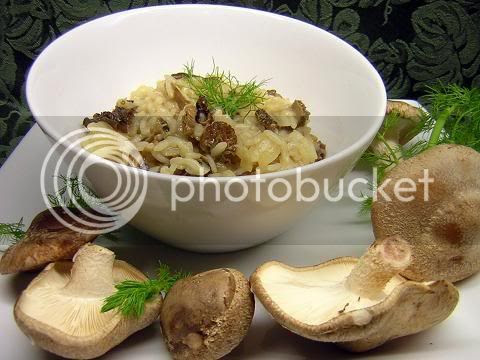 This time around my risotto consists of wild mushrooms and fennel. The reason for that choice was quite simply that I had recently received a very large box of shiitakes from my mushroom growing friend, (to which I added dried morels from my cupboard) and I had a fennel bulb that needed to be used asap. I looked at a few risotto recipes, mainly just because I like looking at cookbooks, but then decided to wing it. For the most part, risottos all have the same base which can then be built upon to create endless variations. I made this recipe up as I went along, and as you’ll see; my instructions for making it are therefore all approximate. If you make a risotto once by the books then you’re all set to do your own thing afterwards. I had originally wanted to do a bunch of risottos and post them all, but then the deadline for HHDD snuck up on me and so this is all you’re getting, (but it's a good one). Expect a dessert risotto from me sometime in the near future.


Wild Mushroom and Fennel Risotto- Courtesy of Me!

• Heat olive oil and butter in a large pan.
• Add onion, fennel, mushrooms, fennel seeds and garlic and stir occasionally until soft.
• Add rice and mix in well.
• When rice is fully coated, add wine and stir until wine is almost completely absorbed.
• Begin adding stock, about ½ cup at a time, allowing each previous ½ cup to absorb before adding the next one. At this point you will almost have to stir continuously.
• When your rice looks slightly creamy but is still a little aldente to the taste, add the parmesan and mix it in.
• Then eat it!

I loves me some risotto! I just started to make this recently and am hooked on it. You're right, it's not hard to make at all, you just need patience.

Hi Brilynn -
I agree with you, stirring is key while making risotto, and is much better to be doing that this time of the year than be toiling in summer heat. Fragrant Fennel and Wild Mushrooms sound like an unbeatable combination. Looks great!

Aha! Something to do with the morels you sent me!!!

daaamn... what a great combination. I'm coming for dinner.

Thank you for giving me risotto hope for the future.

You're right, risotto isn't hard, even though a lot of my friends think it is. I'm personally not a huge mushroom fan, but I'm sure this recipe is delicious.

I've been besotted with risottos too lately....are you planning to try a sweet risotto version anytime soon?

They say it's all in the wrist, Brilynn, and clearly you've got some great wrist action. Beautiful risotto!

Brilynn,
Your photos, food styling and recipe are so darn good! I love risotto, thank for your recipe esp I want to try cooking fennel (will be my 1st time then)

Wow! That risotto looks great...I am taking notes of everyone's tips and feedback from this Donna Day round for my next risotto ventures :)

You're so lucky to have a mushroom grower friend!!!

You're right, all you need to make risotto is a strong arm and lots of patience. Fennel risotto sounds delicious, I like that combination.

Absolutely amazing - the recipe sounds great, and that second photograph is absolutely stunning! Congrats on some awesome work :)

Wow. Those photos are almost 3D. I feel like I can reach out and take some. Um, but I can't. Darn, I really wanted to try some- it looks awesome.

My risotto doesn't involve stirring at all! I just put everything in the pressure cooker & it comes out creamy & perfect everytime!Mmm!:)
paati

I have seen it so many times on TV,all that stirring and waiting for the perfect time tires me out!It's like Indian cooking everyday, on your feet,doing all that.

But it looks so good,like comfort food, I might do it this winter as soon as the temp hits 30s here:))

I bet it tasted divine.

How wonderful to have mushroom growing friends - I'm quite green at the thought of your large box of shiitakes. Lovely risotto - I don't have enough recipes that use fennel imaginatively, so thanks for this.

What a great combination Brilynn. And beautifully presented too. Thanks for participating and good luck in the voting.

I'm definitely going to need to try this one. I love risotto (I think of it being hard in terms of labor intensive but true the technique isn't complicated). The combo of ingredients sounds great. Seeing as I featured butternut & sage in my entry, I'm going to have to check out the one you made with some of those ingredients.

This would be my son's version of Heaven! I think I'd enjoy it, too!