A Tray Full of Sweets 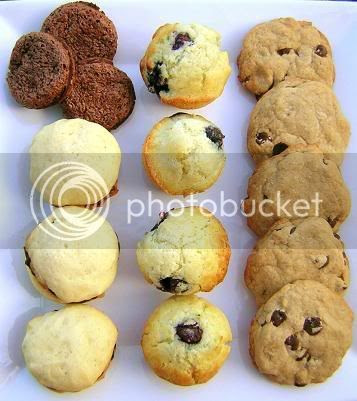 Perhaps this entry should have been more accurately titled “How To Be A Domestic Disaster”. But that’s a little harsh. My tray of sweets looks pretty, and it’s fairly edible too, it’s just not exactly what I had originally planned. Mom had asked for some goodies to bring to work, nothing specific so I thought I’d make an assortment. I began with a chocolate chip cookie. I’m eternally in search of the perfect chocolate chip cookie so I attempted another new recipe, hoping it would be better than the last. It wasn’t perfection. The cookies were by no means bad, but my search continues. I want a chewy chocolate chip cookie that is just as good the following day as it is fresh out of the oven. I want a fat cookie with edges that are barely crisp and a middle that is soft and chewy. If anyone has a cookie that fits this description, I would be very happy to hear from you.

After the random chocolate cookie recipe I decided to go with something from Nigella Lawson. I was planning on making her chocolate macaroons, but I wanted a warm up recipe before I delved into something more complicated. I settled for blueberry muffins. I’ve made tons of muffins, no problems here. I even dared to put them in mini muffin pans and they came out just fine.

Then came the macaroons, a.k.a. the downfall of the day. I thought it started out pretty well, I was whipping egg whites, sifting cocoa, things seemed alright. I then had to pipe my batter into little circles on baking trays. This was supposed to be done with a pastry bag and tip. I used a milk bag with a hole cut out of the bottom. Things were still alright. I ended up with three trays full of nice little chocolate meringues to go into the oven. Little did I know, there was trouble ahead. This being my first attempt at making macaroons I was unsure as to how they should look when done and when to take them out of the oven. Nigella told me 12-15 minutes and that when they were done they should be dry on top and chewy on the inside. Twelve minute passed and then fifteen. I left them in for longer and longer because the tops didn’t seem to be dry, and how was I supposed to know if they were chewy on the inside? I think what deceived me the most was that they were chocolate and therefore didn’t show any indication of how very burnt they were on the bottom. I finally took them out of the oven only to discover that the bottoms were as black as hockey pucks. I think I was so preoccupied with trying to determine an appropriate state of dryness that I failed to notice the smoke that was now billowing out of the oven and must have been accumulating for some time. You would think that smoke would have been pretty obvious…

Not one of the macaroons was salvageable; I had to throw all of them out. I hated having to throw out two full trays of macaroons. It physically pained me. It brought tears to my eyes, or maybe that was the smoke? In any case, I faired slightly better with the third tray, except I was so paranoid that I would burn them again that I took them out too early. This meant they were extra chewy. Chewy is better than tasting like charcoal. Having thrown out two of my three trays of cookies, I had way more chocolate filling than was necessary, (this had been prepared while the macaroons were on fire). My one good tray contained 18 meringues, only enough to make 9 finished macaroons. So not only did I have extra ganache but I was also short on cookies, (Mom had requested enough for 60 people). Off I went, in search of a recipe that wasn’t Nigella’s macaroons to use up the rest of the ganache. I will attempt the macaroons another time, but at that point I was in no mood to risk failure again.* My final cookie was a simple vanilla cookie, quick and easy, which I combined with the ganache to make chocolate filled vanilla sandwiches, a sort of soft reverse Oreo. They were ok, but just left me with regret; the sadness of what could have been.

*After having a few hours to reflect on the whole macaroon situation I’m pretty sure it was actually educational and will lead to high quality, Nigella Lawson worthy macaroons in the future, but at the time I was not happy.

If that is a disaster...you can destroy my kitchen anytime you'd like making those :)

wow what a spread of sweets! This look tasty, not the disaster you make it out to be.

I find a quick way to make cookies chewy is to undercook them, as they tend to crisp up a lot when they cool, also if you add some molasses it also helps to make them chewy. Also make sure you do not overmix your batter. Hope that helps.