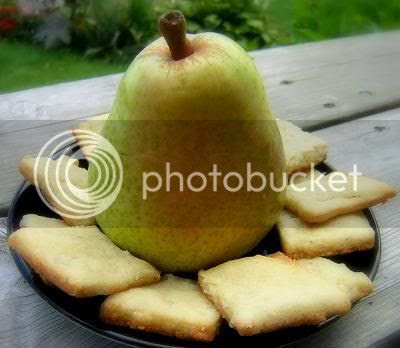 After spending the last few days drooling over my new cookbooks, I decided to try out a recipe. There are still some key lime cookies left and tomorrow I have to bake up a whole bunch of sweets for Mom to bring to work with her, so I restrained myself from making a dessert item. This was hard to do as the majority of Nigella Lawson’s How To Be A Domestic Goddess’ is one mouthwatering goodie after another. Instead I ended up making what Nigella calls “Irish Blue Crackers”. In my North American mind, when I hear the word cracker I think of something crisp, thin and savoury. I guess 2 out of 3 ain’t bad. Thin? Yes. Savoury? Yes. Crisp? No. The results were good, but only after I got over the fact that these were definitely not the crackers I had in mind. I was initially quite disappointed, but then I realized that had this recipe been titled “Flat Little Flakey Irish Blue Biscuits” I would have been quite satisfied with the outcome. I suppose that’s not a very whimsical title. But that’s what they were! They were very very flakey and delicate and almost crumbled when you picked them up. This delicateness was probably due to my rolling them out too thin. I ended up with many more “crackers” than was predicted. Despite these minor glitches, the blue cheese flavour was prominent and went very well with the fresh pear that I sliced up to accompany my Flat Little Flakey Quebec Blue Biscuits, (because if you really want to get specific I used blue cheese from Quebec, not the suggested Ireland, but Nigella said I could!). I think grapes would have been nice as well. And maybe a glass of wine too. Ah well, these are all thoughts to file away for next time.

So my first attempt at becoming a Domestic Goddess was less than a resounding success, but really, that was all in the semantics. I say potato, Nigella says potahto, we’ll work this through.