I Jam Cause I Can 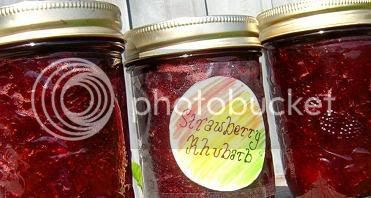 There are some things that I’ve never really considered making. Up until a little while ago, jam was one of those things. I don’t know why I’ve never made it, I’ve had all of the components in place; I’ve got fruit and I like to eat jam. That’s really all you need. Jars help too. I guess jam making somehow seems old fashioned, like something that’s only done by grandmothers… and Mennonites. Somehow people have been led to believe that in the 21st century you buy your jam at the grocery store. Now that I know how easy it is to make my own jam, I will no longer be one of the poor schmucks buying Smuckers.

This whole jam thing got started when I cleaned out the freezer and realized that about half of it was fruit, and it would have taken a whole lot of pies to use up all that fruit, (not that I’m opposed to pies, I love pie, but I’ve got lots of love to give and it’s about time jam got some of that love). Anyways, I vaguely remember, sometime in the distant past, before Mom started working, that she used to make jam. Of course, she used to make a lot of things for my brother and sister, then I came along and she started working. Suddenly she made less and less, and special things like bread and jam where only made when my brother came home from university, (I still hold a grudge over that). Nevertheless, she did at one time make jam and so I decided to use her old recipe, which comes from the Canadian Living Cookbook, to make some of my own. For my first jam making session I chose strawberry-rhubarb, a lovely combination:

Boil it up, test consistency, put it in sterilized jars, and there you have it, jam! I was so pleased with how easy this was that I went ahead and made white cherry jam too. Now I want to turn everything into jam and eat it on ice cream and in muffins and on waffles, (and tomorrow- I’m makin’ waffles!) and in cakes and on toast, (maybe with peanut butter) and with eggs (yes it’s true, jam with eggs, try it, you’ll be converted like I was) and pudding and let’s bring jam into dinner too- throw some on chicken and meat, (cherry goes well with duck) and, and, and…. And everyone’s getting jam for Christmas.

Labels: Fruit...sort of, Sweets of All Kinds

If you make the waffles make sure you put some whipped cream on 'em too ;)

I'm going to make jam one of these days! We always had homemade jam on hand when I was growing up and everytime I buy it at the grocery store, I think that I should make it myself. It's just one of those things that seems like it will be so much trouble but I'm sure once I do it, I'll realize that I should have been doing it all along!

strawberry and rhubarb is also one of my favourite jam combinations of all time. strawberry jam can be sooo sweet and the rhubarb just adds that great tartness. i also just made peach and fig jam, which is another wonderful combination!