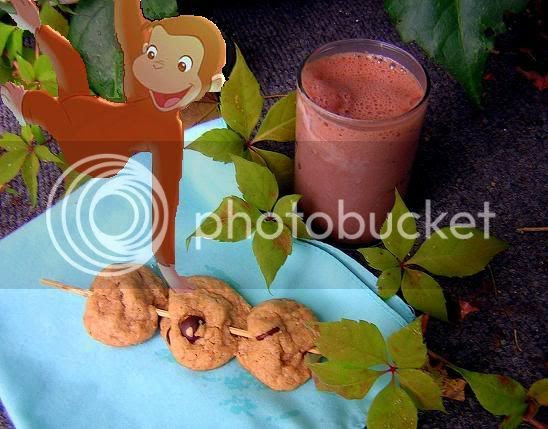 Stephanie of Dispensing Happiness, (something she has been doing a lot of lately by organizing the Blogging By Mail package swap and now this) is hosting Blog Party #14 and has chosen a kids party as the theme. In order to participate you had to come up with an appetizer and a drink suitable for children, (alcohol was therefore frowned upon). I had lots of ideas for appetizers. The thing with kids is that they’re picky about real foods but will eat most junk that’s put in front of them. They’re extra excited if it looks like something they might find on the bottom of their shoe, or up their nose. Equally gross names for these concoctions are also appreciated by the little ones.

I thought of making ‘dirt’ (chocolate) cake with worms (of the gummy persuasion) but that didn’t really satisfy the rule that the appetizer had to be able to be eaten with one hand, (so that they could be sipping a drink from the other). I thought of different things with pudding and jello (both can be turned into slime or snot or sludge) and different creepy crawlers creations, but the problem with all of these ideas is that although they might be appealing to kids, there are no kids in my house right now and so I’m not certain that something labeled ‘spider snot balls’ would get eaten… I thought of making a party mix type of snack like ‘puppy chow’ (something I was introduced to in Australia by an American, it’s got chocolate chips, peanut butter, Chex cereal, butter and icing sugar, very sweet and sugar laden) but it seems like every other kid is allergic to nuts these days, so that wouldn’t work. Then I contemplated going the cute route, making animal cookies or crackers, but I see that Culinary Concoctions By Peabody is already all over that idea, and she did quite a nice job of making farm animals. I thought of making gingerbread people but decided that it was too Christmas-y and I’m not ready for that yet. I considered a more savoury appetizer like cheese bread or mini pizzas, which I’m sure my imaginary children would adore, but ultimately decided that I wanted something sweet. Isn’t the whole point of children’s parties to get them hyped up on sugar and then send them home to their parents’ house where they’ll be bouncing off the walls for days? That’s the impression I always got anyways, fill them with sweets and hope they don’t explode until they’re safely out of your supervision…

Now then, if my sweet appetizer wasn’t going to be cute like bunnies, what would it be? A-ha! What’s better than snack food you eat with your hands? Snack food you eat off a stick! What kind of sweet snack could I put on a stick that would be worthy of a children’s party, but would also get eaten by the adults that will actually have to consume them? Chocolate chip cookies! And so the Chocolate-Chip-Cookie-Kebob was born. I followed a recipe for chocolate chip cookies from bakingsheet, the only change that I made was to add dark chocolate chips instead of regular as they’re preferred at my house, I suppose for the kiddies mini M&M’s would have been more appropriate but I didn’t have any of those. Then all that I did was make mini cookie balls and slide them onto wooden skewers which I had soaked in water ahead of time.

Appetizer done, onto the kid friendly party drink. What goes better with chocolate than a nice cold glass of milk? A nice cold glass of Monkey Milk, (like I said, the silly names are a must). Monkey Milk takes seconds to make and about the same time to devour. Just combine banana ice cream (mine happened to be homemade, I’m still on my ice cream making kick), milk, some ice and a few scoops of chocolate powder and blend away. Let the sugar high begin with Cookie Kebobs and Monkey Milk!
*Sugar apparently induces random creative streaks in me, hence the Curious George picture. He also fulfills the “cute” aspect, done and done.

Ha.... you are going to make a great mom one day (that is, if you graphic artist/photoshop career falls through)....

I haven't been cooking much lately as the film fest just wrapped up, but, I take inspiration from your blog.(well, not really, I mean, I haven't actually "cooked" anything from your blog or cooked anything interested since reading your blog, but, I figure, it is a nice compliment to say that you have inspired me.... ;) )


Maybe I should put it in the future tense "you will inspire me to cook"....

I love curious george! He is such a cheeky monkey... just perfect for a kid's party.

Cocoa has given his two thumbs up for your Monkey Milk, delicious!!!