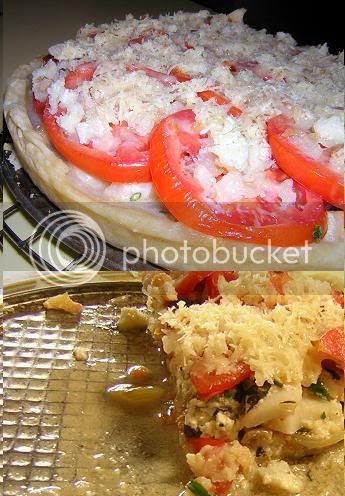 I made this recipe up all on my own with the intention of participating in a blogging event called ‘Hay Hay It’s Donna Day’ which is being hosted by Running With Tweezers. As I sat down to type up my post, (on the eve of the deadline no less) I took another look at the original challenge and realized that in my haste and ignorance I had misinterpreted it. Perhaps part of this misinterpretation is due to the fact that up until about a week ago I didn’t even know who Donna Hay was. For anyone else who has been living under a rock, Donna is a famous cook and food stylist from Australia. Donna’s recipes are known for being simple and generally unfussy but which look good enough to be the star of a meal. She has her own magazine and wrote a bunch of cookbooks. Many people equate Donna with Martha Stewart. If you want to find out more you can check out her website. Anyways, I should have clued into the fact that the event is called Hay Hay It’s Donna Day and as such would probably have something to do with her. I have the attention span of a turnip lately and haven’t been to pay full attention to anything, this event being a case in point. Now that I’ve read up on the origins of the event (it was started by Winos and Foodies and the first recipe was Donna’s self frosting cupcakes) and understand how it works, my tart clearly has nothing to do with it and I should just hang my head in shame, but it’s a good tart, so I remain proud of that. The whole point of this event is to take the assigned Donna Hay recipe, (this month it’s an asparagus tart) and make it your own. I get it now, the recipes are easy and look pretty and everyone is supposed to come up with easy and pretty variations of their own. I’m a rebel without a cause, here’s my freshly invented recipe for Shrimp and Scallop Tart:

Directions:
1. Roll pastry into a 9” tart pan. Any kind you have will do, you could even use phyllo dough or puff pastry but you would have to adjust cooking times appropriately. I used a ball of pie dough (no sugar) that I had in the freezer.
2. Blind bake at 350F for 20 minutes. Remove the weights and bake another 5-10 minutes until slightly brown. Remove from oven and cool.
3. Heat butter and 1 tablespoon of oil in a skillet and add sliced onions. Stir occasionally and remove from heat when they have become slightly brown and caramelized.
4. Heat another skillet and add the remaining oil. Add garlic, cook for 2 minutes and then add morels, cooking another few minutes. (I happen to be fortunate enough to have morels that grow in my backyard which I dry and then use all year long, if you are not so fortunate you could use any type of wild mushroom).
5. Add in sliced shrimp and scallops and sear briefly, just a minute or two on each side.
6. Add white wine and let it cook off. Add the reserved morel water and simmer until it has reduced slightly.
7. In a bowl, mix the egg and sour cream together. Remove your skillet from the heat and stir in the egg and sour cream.
8. If there is still a lot of liquid in your pan drain some off so that it won’t be too runny when you pour it into the crust, you need some liquid however so that it doesn’t dry out in the oven.
9. When your crust has cooled, layer in the caramelized onions, then the shrimp and scallop mixture. Sprinkle the chopped herbs overtop. Cover with slices of tomato. Top the tomato with bread crumbs and parmesan cheese.
10. Cover with tin foil and bake in the oven at 350F for 25 minutes. Remove the tin foil and bake another 5-10 minutes until the cheese has become crisp. Remove from oven and let cool slightly. Serve and enjoy.

My recipe is not by Donna Hay, it’s not all that simple and the end result is by no means beautiful, therefore completely disqualifying it from Hay Hay It’s Donna Day#5, but I assure you, it DOES taste good.

Oh not even. I can assure you that your tart is more than acceptable for HHDD #5.

It's savory and it's a tart, so go ahead and enter your delicious (and very original) tart for the HHDD5.

Don't be so hard on yourself ;) Your tart totally qualifies for HHDD! Thanks for participating!

Hey..I'd be really happy if you showed up with that dish...true tart or no :)

Hold your head up Brilynn, it's a lovley tart. Thanks for entering.

This tart is a definite contender for this month's HHDD! Great job.