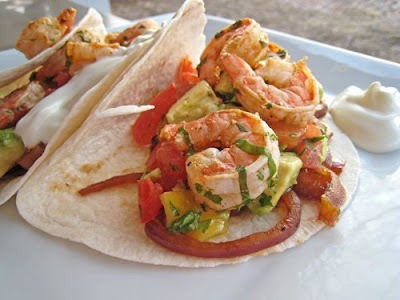 I’m one of those people that need sunlight in order to function properly. Rainy, snowy and dreary days make me grumpy. Call me a bad Canadian, but I can’t stand the cold, (though to be fair, my version of cold is a few degrees cooler than say, an Australian’s). It’s not that I hate winter, I just wish snow were warmer. And after way too many months of winter, all I want are sunny days so that I can get out and ride my bike and leave the house without having to put on nineteen layers of clothing. Eating habits change with the seasons too and just like I crave the sun after a long winter, I also crave fresh flavours and bright colours. We’ve had a couple sunny days here recently, (I’ve even ridden my bike twice!) and for some reason I’ve had it in my head that I wanted to make fish tacos. Once the idea was swimming around, mingling with my daily thoughts, I knew I had to make it before it drove me crazy. As frequently happens though, what I initially plan for and what I ended up with were slightly different and shrimp was used in place of fish. 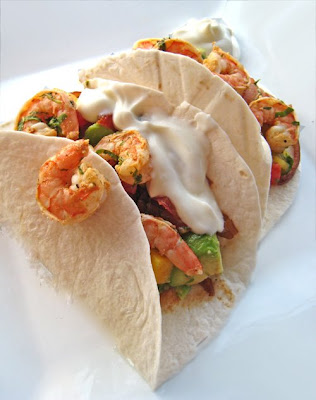 Despite the fact that I like to use recipes when working at the restaurant, I don’t necessarily use them at home. There’s a reason for this; at the restaurant each dish needs to be consistent regardless of who makes it and I don’t want to mess that up. At home where I don’t have anyone judging me, (at least not too critically) it really doesn’t matter. So I made these shrimp tacos without a recipe and if you want to make some of your own, I suggest putting together a salsa made out of things like mango, avocado, tomatoes, lime, cumin, smoky paprika and fresh cilantro. The shrimp were quickly pan fried after marinating in flavours similar to that of the salsa, with the addition of white wine. I also caramelized some onions and fried red peppers to add to the tortilla shells. The shrimp tacos were not the easiest things to eat, (bibs are required) but I thought they were pretty good and definitely put me in a sunnier mood with all those bright colours and tastes.

What kind of foods do you think of for Spring time?

These look so good! It was sunny and warm here today, so nice. I am ready for springtime food!

mmm, these look great & definitely perfect for the springtime weather!
I am dependent on the sunshine so we moved out to San Diego :) I couldn't deal with winters anymore.

it's been ages since I made tacos. what peeves me off is that i cannot get my hands on soft tacos here. always need to make them myself. this though looks incredible and worth making my own soft tacos.

I'm with you on needing warm, sunny weather. And being from Southern California, seafood tacos definitely make me think of spring. I also like grilled vegetable salads when it starts to get warm.

I love the shrimp with avocado. what a brilliant idea:)

Oh I am so hungry for both warm weather and now for shrimp tacos!

Shrimp tacos are so good!

I'm with you, snow should be warmer (or confined to the sky hills and trails), and bright flavors are necessary right now. I suspect that is why I've had fruit involved in alot of our meals lately - orange salads, mango salsa's, stuff like that.
And this has made me decide to make steak and shrimp fajitas next week. Yum.

I had fish tacos last night, oh so good! Yours look wonderful! I love asparagus and strawberries for spring!

I would love a couple of those taco right now. Going and hunt for something to eat :)

this looks so so so good! I wished I could just grab it :)

I'm not a big fan of winter either - and I live in Utah with lots of snow! I love spring and all of the foods it brings -I mostly think of lighter foods for spring. These tacos look great!

How funny, we're actually going out for fish tacos for dinner in a few minutes. Love the shrimp sort! Spring... green things. Yellow things too.

Enjoy your blog. Your presentations are beautiful. Lots of creativity which inspires my photo and cooking. Thanks.

These make me really excited it's Lent. they'll be my dinner friday night wooo. I'm so adding a margarita to the mix as well. Thanks for the recipe!

my favorite kind of tacos are shrimp or fish ones.

Uy q delicia I love when I have the opportunity to read blogs as interesting as this. really thanks and congratulations. Costa Rica Cheap Land for Sale