Happy in the Kitchen 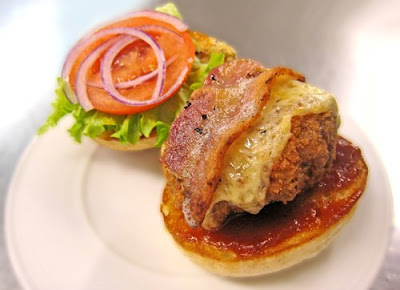 I think it’s pretty obvious that I have a love of food. Until recently though, my love of cooking and baking was restricted to my own kitchen. Since I started at the restaurant I’ve been asked by a lot of people whether or not I enjoy working in a professional kitchen. That’s a tricky question. I usually reply with something to the effect of, “I like work when we’re not doing work.” What’s that supposed to mean? Well, it means I like Chef Challenges and learning new things and playing around with different ideas. I like the silly days in the kitchen when we get our work done but have fun doing it. For example, one of my least favourite jobs is chopping herbs. I know it has to be done though. On silly kitchen days, the herbs get chopped, but they might morph into other shapes on their way to being finely chopped into, as one of the guys likes to say, dust! 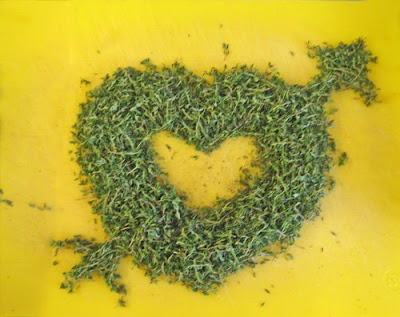 On slower days when we find ourselves with a little extra time on our hands, a question that frequently comes up is “What can we deep fry?” I don’t think I ever get tired of that one. There have been some interesting things to go in the deep fryer, with varying results. Deep fried cheesecake was fun and completely decadent, especially after it was topped with chocolate and caramel sauce. Besides being decadent, it was really pretty too. Dropping the batter covered cheesecake into the deep fryer was a messy affair that resulted in ‘tails’ that were an arty accident. Times like those inch me closer to buying a dSLR and learning how to use it so that my pictures can reflect how cool food really looks. 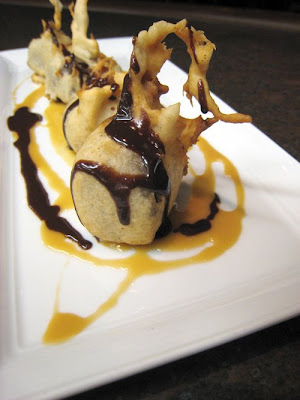 One of the best things to come out of the deep fryer was a bison burger. I’m still having dreams about that burger. What was so special about it, besides being a deep fried burger? Let me break it down for you, from top to bottom: Ace bakery bun, a blend of mustards, lettuce, heirloom tomato, red onion, bacon, applewood smoked chedder cheese, a panko breaded deep fried housemade bison burger, gourmet housemade ketchup and an ace bakery bun. Wow. You don’t even know how amazing that burger was. We decided that it could in fact be improved upon though, by adding caramelized onions, a grilled portobello and embedding cheese in the centre of the burger. One day soon this must happen and when it does, it will be glorious. 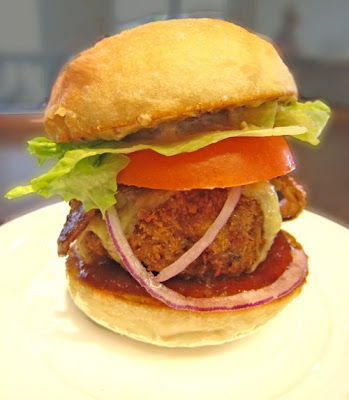 Deep Fried Bison Burger with All the Fixings

I find I get the most random creations from Chef after he’s been cooped up in his office for a while and hasn’t been in the kitchen cooking. When he finally makes an appearance and I ask him to teach me something new or make me something awesome he gets a certain glint in his eyes and comes up with Spaghetti Bolognese or Turkey Pizza. Of course, neither of those things sounds very unusual until you see them made his way. Spaghetti Bolognese was turned inside out and became a beef tenderloin and tomato confit wrapped in spaghetti and pan fried in duck fat. It had the flavours of spaghetti Bolognese but looked nothing like the classical version. 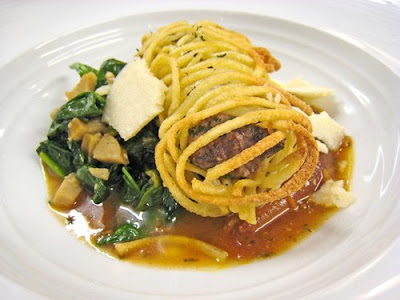 Most recently Chef made turkey pizza, which is to say, not really pizza at all. He butterflied a turkey breast, pan fried it in duck fat and brown butter before topping it with more traditional pizza toppings like mushrooms, onions, salami, tomatoes, basil puree and bocconcini. Turkey pizza! Sort of. 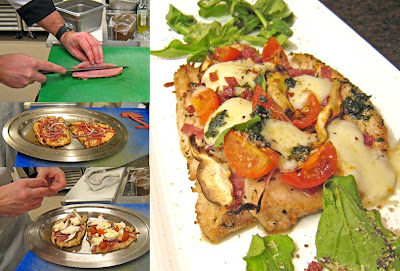 Every now and then actual work is kinda fun too, even if it’s completely different from just playing around at home. Recently there was a function that required 75 portions of white chocolate mousse in dark chocolate cups. That’s clearly not something I’m going to be making at home on a regular basis, (at least not in that quantity) so getting to make something new and seeing the process is fun for me. The ‘cupcakes’ so to speak, were then garnished with sugar glass, a sprig of mint and a little fruit salad of oranges, blueberries and strawberries. I’m sure if you ask me again in the middle of summer when I have to make a million of them if I like making white chocolate mousse cups, you may get a different response, (and possibly a cupcake in the face) but who knows? Hopefully I’ll like it just as much. When work is fun, I’m happy in the kitchen. 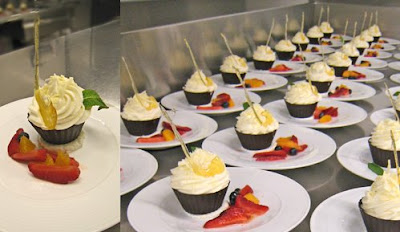 Brilynn, your enthusiasm for food has always been inspiring...so nice to know that working in a professional kitchen continues to be a joy for you. I love the deep fried cheesecake...gorgeous with that 'tail'. Not so sure about the bison burger, but the ingredients are awesome. Thats a lot of mousse in chocolate cups, but they are impressive and pretty!

The "cupcakes" are adorable! I love hearing about the creative adventures you get up to in that kitchen.

Boy, it looks like playtime in the kitchen is really fun for you. Deep fat fried cheesecake?? It looks fabulous. Did it get served or just eaten in the kitchen? I think if I worked in a professional kitchen I'd quickly get bored of doing the same thing over and over. And I hate making salads!

I am always a supporter of playing with your food!

And what a coincidence you'd bring up duck fat. I've never cooked with it, and I'm not sure whether I've ever had anything cooked in it, but I recently befriended a chef who offered me some this week. The plan was to make some french fries in it tonight. I can't wait!

i love that the kitchen you work in is so inquisitive..i also i like the fact that your chef will actually make you stuff if you ask him..cool stuff at that..also i wish i had a better camera, like yours...that deep fried cheesecake will haunt my dreams in the most delectable way possible even though i havent tasted it

I always believed that you could learn to cook by being around someone who knows how to cook, and you're proving that theory -- you are learning to stretch yourself as a cook by being inspired by the Chef. Wonderful!

Deep fried cheesecake...must have!!! Must have. Must have.

Brilynn, you totally blow my mind! I think I could enjoy that burger and the duck fries! What a way to play with food - What can we put in the deep fat ????
Not to worry, your photos are fine!

This dish is looking so much delicious.
Yummmmmmmy!
I Buy Barbeques

The kitchen is a happy place, I totally agree. Love everything here, especially the mousse cups!

You are having so much fun! I can't decide which one I want more, the burger or the cheesecake....

I've always been curious about a professional kitchen: how the work is done, shared, and all the other details. Must be interesting indeed.

Loved the idea of deep fried cheesecake. I would love to try some:)

I have tagged you :)

How fun to play around in the kitchen - everything looks amazing but the mousse in chocolate cups is calling my name.

Um, I'll take anything deep fried, but I especially want that cheesecake!

This made me giggle... you know, cooks are the same everywhere you go. I've also played the "what can we deep-fry" game. It was out of control just after Halloween- someone kept bringing in different mini-candy.
And duck fat somehow makes it into everything... the recent obsession is duck cracklin' with sea salt. So friggin' amazing. I want to use it to garnish something.

All these are looking delicious, more attractive is design of all of the food.