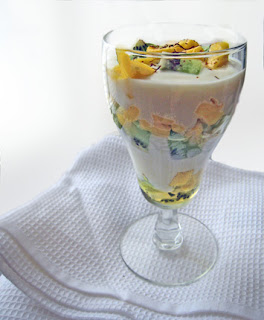 As you can obviously tell, things are looking a little different around here. That’s because I’ve been restless lately. Actually, this has been going on for quite some time. It’s affecting all areas of my life so it was only a matter of time before the blog was shuffled around too. Back in January the restlessness was making it difficult for me to blog and I felt like it was a huge effort to put together a semi-coherent post. Around that time my favourite Steamy Kitchen blogger wrote a post about food blog writing tips. I left a comment on that post saying I was looking forward to hearing more of her tips as I could use them to jumpstart my writing again. Not long after that, on a chilly winter’s day, a package arrived for me from the ever amazing Jaden. It was a little bottle of saffron to give me the boost I needed to get back into the swing of things. It’s taken me far too long to get this post up, but that little gift really did get me back into blogging mode. It didn’t take care of the rest of my life, (you can’t win ‘em all) but it did manage to refocus my blogging. Thanks Jaden!

So without further ado, welcome to another round of the Jumbo & Jaden Project! Can you believe I’m at round 5? What started as a joke is slowly building into an obsession of mine. I can’t help it, I love everything that Jaden makes and it only seemed right that I make one of her dishes with my new spice, especially since saffron isn’t a spice that I’ve used very much in my cooking. But I love trying new things though so I quickly perused Jaden’s archives for a saffron recipe and the first one to catch my eye was a beautiful Sweet Yogurt Sundae with Saffron and Pomegranate. It was also around that time that I had been waxing poetically, (or something like that) about how kiwi and pomegranate should always be photographed together because they’re Fruitywood superstars. I thought this would be the perfect opportunity to prove this as Jaden’s recipe calls for both of them. Off I traipsed, in search of the necessary ingredients, hitting up my favourite locations for cheap goods. But where were the pomegranates? They were nowhere to be found. I checked no less than 7 different grocers for pomegranates and left each one empty handed. The last fruit stand that I ventured to had pomegranates, 3 of them to be exact, but they were the most pitiful looking pomegranates I’d ever seen in my life. Nevertheless I picked each one up, turned it over, examined it and tried to decide if I could salvage enough of the seeds to make the Yogurt Sundae. At some point I realized this was ridiculous and that I would be better off pairing my pretty kiwi with a fruit that was fresh and tasty instead of mediocre and past its prime. I settled on mango as a suitable alternative. For the rest of the recipe I followed Jaden’s directions and the end result was delicious.

Of course I still had plenty of saffron leftover and was itching to use it again. I considered doing another Jaden recipe but thought that might be overkill, (although I will definitely be making her Persian Sour Cherry Saffron Rice at some point) so I turned to epicurious.com and came up with Arroz con Pollo, a traditional Spanish style chicken and rice dish. I had never had it before either and in my never ending quest to try new things, I thought I’d give it a whirl. I was not disappointed. This dish is packed with flavour, so much so that my camera couldn’t handle it and this picture was the best I could do. But don’t take my word for it, make it yourself and enjoy the fiesta in your mouth. Hasta luego! 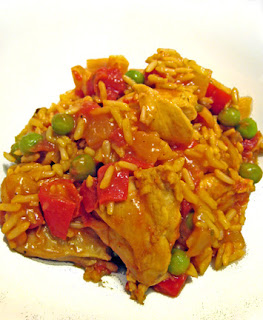 Pat chicken dry and season with salt and pepper. Heat oil in a 12-inch heavy skillet (at least 2 inches deep) over moderately high heat until hot but not smoking, then brown chicken on all sides, about 12 minutes total. Transfer chicken with tongs to a plate.

Pour off all but 2 tablespoons fat from skillet and add onion, bell pepper, and salt to taste. Cook over moderate heat, stirring, until softened, about 7 minutes. Add garlic, paprika, and rice, then cook, stirring, 1 minute. Add wine and boil, uncovered, 2 minutes. Stir in tomatoes with juice, chicken broth, saffron, and bay leaf. Nestle chicken in rice, adding any juices from plate.

Cook, covered, over low heat until chicken is cooked through, rice is tender, and most of liquid is absorbed, about 15 minutes. Remove from heat and stir in peas, olives, and salt and pepper to taste. Cover skillet and let stand 10 minutes. Discard bay leaf.

Oh, don't sell yourself short! That picture looks fantastic! It's kind of like a faux-ella, isn't it, lol :) Well, I don't have a special pan and such either so I welcome an easier alternative...

These both look fantastic!! I just made a saffron dish last night that I'll post later (or tomorrow...depends on how motivated I get). There's just something about the taste of it that I find thrilling. How gorgeous! And how sweet of Jaden, she really does rock! (as do you... ;)

I love the new layout! I have never made anything with saffron, and one of these days I'm going to take the plunge...

First of all, this sundae looks truly amazing. I'm actually drooling a little as I type this. (Sorry, I guess that's TMI!)

Secondly, I sympathize with your restlessness, and understand how it permeates all areas of your life and can even come in the way of blogging. That was part of what kept my blog silent for over a year! I hope you're doing okay.

I haven't come across Steamy Kitchen before, but I'm off there now ...

I love the new look. And arroz con pollo is my kinda of dish.

Love the new format! And I'm a huge fan of Jaden (and the lucky beneficiary of some goodies from her pantry, too). Both of these recipes look amazing.

Nice revamping of the bloggie! Good job. I don't know squak about computer programming. Can i hire you now? haha

The layout is very nice! I like it very much.
Jaden is so sweet to send you such a nice gift.
I'm glad you're finding more inspiration to blog. I have had times like that.

Both of your dishes look wonderful.

Thanks for coming and saying hi :)

I really like the idea of a saffron youghurt. Yum :)

and yes heron island is awesome :)
Did you know the old research station has burnt down?

I agree that there is nothing like the beautiful color and fragrance of saffron - it can transform an ordinary recipe into a gift from the casbah!

Congratulations on your new look - it's wonderful.

I too have been restless...I just can't decide what I want my site to look like!
Yours looks great.

The Arroz con Pollo is very similar to the dish my mom has made forever, and it is a wonderful, full flavored, colorful dish! Yours sounds even better.

I am obsessed with her cleavage...that's another story! The fruit salad looks gorgeous and I bet the flavors were amazing!

Oh Arroz con Pollo is one of my favourite dishes and I've never seen this recipe. So, guess I'll have to put it on my menu for next week!

The Arroz Con Pollo looks devine - I adore dishes like this.

Your blog looks great! And I'd love to have some of that Arroz con Pollo, please...