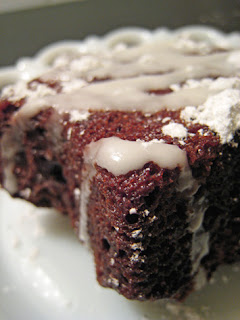 It’s a good thing this Chocolate Gingerbread is supposed to be dark because given the state of lighting in my kitchen I just have to assume I’m doing things right because I can’t actually see anything to confirm that. When I moved into my new apartment, the kitchen ceiling was covered with little twinkly Christmas lights. Half of them didn’t work and were falling down, the other half made a feeble attempt to shine through their dust coating. There was no overhead kitchen light, just the fire hazard Christmas lights that I turned on using a regular light switch and which didn’t appear to be plugged in anywhere. From day one I started bugging the landlord to take them down and install a normal light because I didn’t like trying to cook in a cave, (did I mention there are no windows in the kitchen either? Except for a frosted one that leads to the bedroom.). He kept saying he’d do it, but it never seemed to happen. Then one day when I was out shopping with a friend, the landlord came by. We had left my friend’s boyfriend at the apartment so that he didn’t have to be subjected to a few mind numbing hours of trekking aimlessly store to store. While we were out Landlord and FBoyfriend dismantled the lights and then Landlord left. When Friend and I returned, FBoyfriend told us the landlord had been by, (or so he assumed, he didn’t actually question the fact that a strange man wanted into my apartment, he just let him in). I went into the kitchen and was thrilled to see that the Christmas lights were gone. That thrill was short lived as I realized I was standing in the dark with no light at all in the kitchen. Furthermore, when I opened up a nearby closet I discovered a heap of filthy Christmas lights staring back at me. I am not impressed. 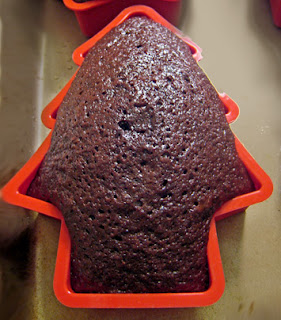 As you may know, my landlord is not the only person I’ve had some beef with. Nigella Lawson is another person that has caused me rage in my kitchen. I know tons of you love her and have had nothing but success with her recipes, but for some reason I’ve failed more than succeeded when I use a Nigella recipe and I’ve come to the conclusion that the problem lies in the Americanized versions of her cookbooks. Somewhere along the line, proper testing was not done and some of the measurements are just plain wrong. However when I see someone like Kelly-Jane of Cooking the Books cooking her way through Nigella Express with such great results it makes me want to give it another try. This month’s Cooking Club Challenge on the FoodTV Canada blog is Nigella’s Chocolate Gingerbread and I decided it was time to give Nigella another chance, especially since measurements were given in multiple formats. I chose to stick to Nigella’s original recipe, measured in grams instead of cups. I really wish that’s how all baking recipes were written, but alas, as with kitchen lighting, I don’t always get my way.

I have to say though, this Chocolate Gingerbread has me eating my words. It’s fantastic! The only regret I have is that I tried to bake the gingerbread in cute little silicone molds of a tree, bell and star. The molds refused to give up the gingerbread and I broke all of them in trying to get them out. Also, as you can see in the picture, the gingerbread rose a lot more than I thought it would. It was still very tasty, especially with my improvised orange icing drizzled on top, but it would have been prettier if the so-called non-stick molds hadn’t of stuck. Nigella is back in my good graces with this recipe though.

Nigella is pleased to know that! Haha :) I'm not sure how the Americanized cookbooks are but her books here come in grams. Never tried chocolate gingerbread before-- I just tried my first classic gingerbread a few weeks ago!

Sounds and looks delicious!I'm with you, I've only had marginal success with Nigella.

Chocolate gingerbread should be on my list of things to bake for Christmas. LOVE the Christmas tree shape!!!

I really enjoy your baking! This chocolate-gingerbread makes me want to have a thick wedge with a cup of tea.

That did rise a lot. It looks good though!

I hate those molds! Glad to see that Nigella was vindicated.
I only had a window in my first apartment...the other ones were caves. I was so happy to move to my house because there were so many windows.

I am very good with tips - I don't get out much! Always grease the silicone mould or use a product called Cake Release which is very helpful. I am not a lover of silicone moulds I love to see a well used baking tin.
I will now have to try the chocolate gingerbread after reading about yours.
A happy Christmas and New Year to you. Mx

i understand completely how you feel when it comes to recipes and conversions..im a french user so most often when i find an american recipe that i like to copy converting the right proportion is always a headache :-)

Ugh, sorry to hear about your kitchen lights! How frustrating. The gingerbread still looks delicious :).

I've heard the same thing about Nigella's books - that if you want to cook from one of them, order it from the UK.
Hope you managed to get some light in your kitchen - maybe you bribed your landlord with a chocolate gingerbread cake? :-)

Brilynn,
I really do like Nigella, but I've also had the same problems as you. Measurements in some of the earlier American versions of her books are just plain wrong--shameful! I bet with Nigella Express, they've ironed out the kinks. The book of hers I really appreciate though, is How to Eat. I think it's a really personal cookbook with a unique food philosophy and was ahead of its time in terms of relying so much on the personality and philosophy of the author.
Julie

Bri, Nigella and I have had our disagreements, too. Still love her, though. :)

Your idea for gingerbread chocolate is just what I needed... to make my holiday baking list even longer. ;)

I love gingerbread. I love chocolate. So what's not to love here? It looks great, even though the silicone refused to let go.

I still haven't tried a Nigella recipe, but now I'm scared!! Your chocolate gingerbread looks so delicious, though!! And I have a hard time with the silicone molds, as well...

I've always wanted to try this recipe out- now i'm just dying to.

I did a little research when i was contemplating buying one of Nigella's books and read on amazon that the conversations for the measurements were indeed flawed in the American version. By some stroke of luck, a friend, unaware of the hooha, got me the British version :D

Looks devine! I must admit I am a huge Nigella fan, and have been pretty luck with all of the recipes I have tried from her books. I am hoping to get that new one of hers for Christmas. If not it will be on my boxing day list :)

I haven't seen the American version of her books but I made it a point to buy the books in the UK before I moved back here.

At least for the UK editions, she has corrections on her website. I like it how she does that because it is virtually impossible for cookbooks not to have any errors. I think all cookbook writers should do the same.

I have had nothing but success using her recipes.

OH, that looks good! Gingerbread is one of the best things about the holidays! I've never made anything from Nigella, but it's interesting that you think her American books might be wrong...good to know.

Oh Brilynn... you poor thing! I feel your frustration with the landlord and apartment situation! I hope it all turns around for your soon!

I completely empathize with your small, dark kitchen - such a nightmare for taking food photos, not to mention working in without getting claustrophobic. Congrats on your Nigella success - may it be the first of many.

Hurrah! Finally - a Nigella recipe to bring you round to her ;) It does look good and I think I've found another goodie to be made for the Xmas hampers *hangs head* oh boy, when with the holiday baking end??

P.S. Hope you get some decent kitchen lights soon!

it looks so fabulous with the icing drizzled over! ohh yummy!