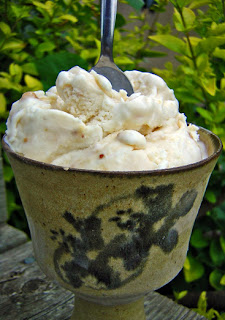 This Coconut Dulce de Leche ice cream was almost missing the dulce de leche as I ate a quarter of it before it could be added to the ice cream machine. That’s right, I just ate it with a spoon. What can I say? It was addictive. Luckily I eventually restrained myself because it was an integral part of my finished ice cream. I used David Lebovitz’s oven method to make dulce de leche which meant that my kitchen was never in danger of being coated in stickiness from an exploding can of condensed milk that was boiled on the stovetop. This is a good thing because I’m not a fan of scraping caramelized goo off of the ceiling. I’ve previously made dulce de leche this safe way to use in Lebovitz’s Dulce de Leche Brownies which I can also highly recommend, (the people at work ate them all so no pictures). Given my affinity for his recipes it’s practically a crime that I don’t have The Perfect Scoop yet. Sigh. I’m not doing too badly though, I’ve been having fun making up my own ice creams, like this Coconut Dulce de Leche ice cream for Meeta’s Monthly Mingle. This month we're mingling with ice cream so I'm definitely there. 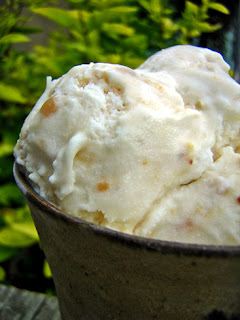 On a completely unrelated note, has anyone else ever browsed Craigslist purely for the amusement factor? Because maybe you should. I’m sure there are some valid employment opportunities on there but this one made me laugh, it simply read:

"Do you have a bathtub and do you like ice cream? Then invite me over right now so I can take some pictures."

Although I can’t see anyone responding to this ad, to their credit, they raise an interesting idea…

Combine coconut milk, milk and sugar in a food processor and process until smooth. Stir in the heavy cream. Chill and then pour into your ice cream maker. Near the end of the cycle add in the toasted coconut followed by the dulce de leche.

I am A.L.L O.V.E.R that one...and please, may I share your bathtub? Sounds outrageous....thus fantastic!

sooo yum :D y'all are making me into a lebovitz groupie and i've never even seen any of his books! :D

I love your ice-cream posts! The same thing happens to me. I can only freeze half of the ice cream. And you know where the other half goes :)

what an interesting combination, Brilynn. Would never think of that myself. I don't have David's 'The Perfect Scoop" yet either, but I think it's high time to buy it...

I've always boiled the cans. I checked out the link and will be giving his oven method a try. SAFE dulce de leche making here we come!! And what a funny man - dr diamond nose job indeed. Thanks for that Brilynn.

Lately it's been really HOT here in Singapore :( Your coconut ice cream looks really good...wish I could have some of it right now :)

delicious looking ice cream, as expected! i am really curious as to the model of ice cream maker you use. do you have a brand name for me, or even an amazon link?

I have decided that you just need to write your own ice cream cookbook. This sounds so amazing!!

That sounds like the ultimate ice cream social - in a bathtub! I love your ice cream - yummmm. But seriously, you need the book. I went to David's class and he's sooooo good!

You've combined two of my husband's favorite flavors in one ice cream -- will have to give him this recipe and remind him that we have an ice cream maker.....

This seems like a great combination Brilynn. I'm at the least going to have to try the dulce de leche.

oh yes, indeed, coconut and dulce de leche is one of the best combinations ever.

Wow, that looks and sounds amazing. Have I mentioned lately that I worship you?

You and your ice creams make me drool on my keyboard... Not pretty, Bri! :)

I just can't stop thinking about a bathtub full of ice cream. Ahh one of my fantasies.....wait that didn't sound good did it?

Amazing ice cream. I will have to try this one.

Hi Brilynn,
I do like ice cream. :)
Your ptohos look lovely and yummy.

Your ice cream looks really good, maybe I would eat it out of a bathtub:)

Bril, I was thinking of you with this mingle. I knew it wold be something right up your kitchen! I love this creation all the way and if you have any left in that bath tub I'd like to come over with by rubber duck and a huge spoon! LOL!

oh my gosh, how good is this!!! You have excelled yourself Brilynn. I will definitely be trying it.

I have a copy of The Perfect Scoop on its way to me in the mail. I can't wait for it to get here.