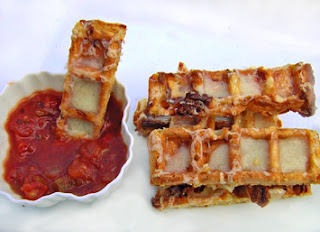 What do you do when you have leftover cheddar cheese waffles? You turn them into waffle chips, that’s what. Whose great idea was this? Obviously not mine. It comes from the master of all things fantastic: Dorie Greenspan. Yes, that’s right, she does savoury just as well as she does sweets. Is there anything this woman can’t do? Well, last time I checked she didn’t have a recipe for stopping time, but I wouldn’t put it past her. It’s something to look forward to in her next book. I can see it now; a time stopping cake with M&M’s on top. But this post is supposed to be about waffles so let’s get back to it. Thanks to Kelly-Jane of Cooking the Books I am now in possession of another Dorie masterpiece: Waffles from Morning to Midnight. It’s an entire book dedicated to waffles and if you’re a regular visitor here you’ll know that I believe that aside from
being delicious, waffles add years to your life. An entire book about waffles is therefore like a guidebook to immortality. I don’t know if I can be trusted with this much power… 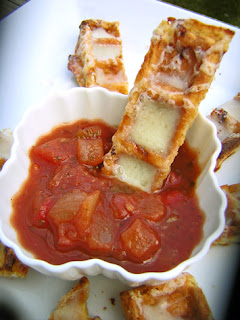 I had previously experimented a bit with savoury waffles in order to make my Waffle-BLT but I had never even considered all of the other ways that waffles could be used. There’s an entire section in Dorie’s book on snacks and starters. This is where the waffle chip idea comes from. The particular waffle recipe I used isn’t from Dorie’s book, but the technique is. I took some leftover cheese waffles that I had in the freezer and baked them at 200F for an hour and a half until they were crisp. And it’s just that easy to make waffle chips! Dorie suggests tons of dips and spreads for your waffle chips, but I had waffle nachos in mind so I covered my waffle chips with grated sharp cheddar and stuck them under the broiler to melt the cheese. Then I simply plated the cheesy chips and served them with a spicy salsa for dipping. I love this idea. It’s a new, fun way to do chips and dip and as an added bonus, the waffle’s crevasses are perfect for scooping up extra sauce. Ooooh saucy!

Rest assured, there will be many more waffle recipes appearing here in the future. I think these waffles alone extended my life expectancy by at least 10 years so I’ll be around for a while still.

I love this idea and will be desperately unhappy until I make that!!!!! Genius, I tell you. Genius!

What? No bacon with those lovely cheesy waffles? All that ice cream must have done something to you :)

what a cool way to use cheesy waffles! ole!

that is really a cute idea!

I thought your waffle BLT was the coolest thing ever. I still have dreams of it. But this is friggin genious.

What an awesome idea!! One I would have never come up with, but I'd gladly eat them anytime!

What a great idea - and much healthier than drowning your waffles in syrup!

inne - i love your bacon idea! just little crumbled bits right in the waffles would be awesome.

brilynn - you are always SO creative - I just love what you come up with!!!!!!

Whoa! Genius! And potentially a reason to go buy a waffle maker. Hmm. I wonder how they'd be fried...

Mmmm...waffle chips?!? Never heard of them but they sound and look scrumptious! Pass me the plate!

I am sitting here wondering how come I missed this blog or never got around to clicking on the little rag-doll pic to see where it leads... I am now convinced that a higher force was working in my best interest. In other words, I would spend my time ogling at this blog and spending all my time in the kitchen. Life as I know it would not have been the same (lol)

Brilynn, thanks for stopping by my blog, it is a pleasure to have you visit and I do hope that you come back again and again :)

I don't think I need to tell you how I feel about your work, just re-read the first paragraph of this comment. :)

It's a little hard to wrap my mind around because my brain keeps saying "sweet", but it's an ingenius at the same time ... and so cute! And cute wins me over every time!

Oh Bri, this is such a wicked idea! I love it!

That is an interesting idea. It looks really tasty. Now I am wishing that I had a waffle maker (even more).

Wow, those look SO delicious. What a great idea. I must make them!

Yay! I'm always looking for new things to pour into my waffle maker...

What a fantastic idea! Who would have thought...waffle nachos. Genius!

That's a wonderful waffle Brilynn!
Glad you are enjoying it :)

Oh my...waffle nachos. Those should be their own food category. YUM.

Those are so cool! S