Urfa-Biber: As Fun to Say As It Is to Bake With

I love trying new things. If I see something on a menu and I don’t know what it is, I’ll order it. If someone offers me something with an unpronounceable name, I’ll sample first and ask questions later. If I hear about a food that I’ve never had before, I’ll seek it out. That is precisely what happened when the amazing Danielle of Habeas Brulee put up a post with a picture of the fudgiest brownies I’ve ever seen. But these were no ordinary brownies. These were Raspberry Pomegranate Urfa-Biber Brownies. I had no idea what urfa-biber was, but I knew I wanted some. Further research helped me to determine that urfa-biber is a spice, a type of Turkish pepper that has smoky and deep dried fruit aroma. One of Danielle’s readers had said that you could find urfa-biber at Kalustyans in . Well I don’t live in but I was thrilled to find out they had a website. The thrill faded quickly when I realized they don’t ship to . Back to square one. Before I had time to figure out where I would find urfa-biber, it came to me. I had left a comment on Danielle’s post saying I’d have to search out some urfa-biber, she emailed me asking if I was interested in a trade; she’d send me some urfa-biber if I sent her something in return. I was definitely game for this! My urfa-biber arrived last week, (thanks Danielle!) and has been sitting on my counter, calling out to me every time I walk past. Last night I couldn’t fight it anymore and had to make brownies. I didn’t have all of the ingredients required for Danielle’s Raspberry Pomegranate Brownies so I set out to create my own recipe. What I ended up creating was Rhubarb Urfa-Biber Brownies. I should be making up more of my own recipes because I’m on a roll right now. I loved these brownies. Urfa-biber has been described as tasting somewhat like what would happen if a chile pepper and a raisin had a baby and so with that in mind, I added raisins to my brownies and was quite happy that I did so. I don’t know if the urfa-biber brought out the raisin taste or the raisins brought out the urfa-biber, but whatever happened, it was good! The urfa-biber was most evident though as a subtle aftertaste of fruity pepper that lingered on the tongue. These brownies even made rhubarb taste good! I’ll definitely be making them again. 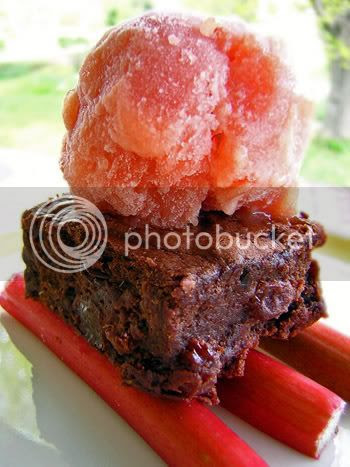 Preheat the oven to 325F and cover an 8 x 8 pan with tinfoil, buttered. Place the pan on a baking sheet.

In a bowl set over a double boiler, melt the chocolate and butter. Keep the heat low so that the butter doesn’t separate. Remove from the heat when the chocolate is melted. Whisk in the eggs, one at a time, combining thoroughly. Whisk in the rhubarb puree and vanilla and then give an extra whisk to bring it all together. Switch to a spatula and fold in the urfa-biber and flour. Continue to fold the ingredients together and add the and raisins. Pour the batter into the pan and bake for 34-38 minutes. The brownies will still be a little wet in the middle but dry on the outer edges. Place on a rack to cool.

These do look delicious, but I am excited for when I get my brownie recipe up. It's a competition!!

deborah, you make me laugh! cant wait for your entry. will it be worth the browniebabe apron? ;-)

b - really loving the recipe. isnt it mad how much you can make out of a simple brownie?

I want urfa-biber too! I am the same way about trying new things, and your brownie photo is all I need to see. The flavor of chiles and raisins makes me think of mole which I love. I'm not a big fan of fresh fruit flavor mixed with chocolate, so i would like to give it a go without the rhubarb. Cute Dorie photo too!

Yum! Very cool. What did you send to Danielle?

I'd rather like some of those now. I want chilli pepper & raisins babies, cooked with rhubarb and chocolate in the shape of Brilynn brownies...

That is a neat thing to say and sounds like a great spice! Your brownies look nice and moist too.

Rhubarb and chocolate ... I think you've been touched by Dorie! She's rubbed off on you.
These brownies look fabulous!

An interesting combination and they look delish...but I was thinking there might be some grilled rhubarb...maybe in another new recipe later? You are truly on a roll and they sound like great creations, too.

I'd never heard of urfa-biber before reading about it on Danielle's blog! And now here again are the fudgiest looking brownies ever. Must get some of this spice and try the recipe!

Rhubarb and chocolate? And urfa-biber too? You really are on a roll!

I'm trying to imagine the rhubarb-chocolate combination -- it really seems like a leap to me, so interesting. And so interesting that you chose rhubarb to sub for pomegranate -- not at all obvious. Not that chocolate and pomegranate are that obvious!

Never ever heard of this before. I love that I learn a ton of things from your blog.

I just love a picture of really moist brownie. Its been so long since I have made one. May have to add that to my list.

I want some urfa-biber too!

your recipe is very creative! For naming, you are no. 1!

WOW!!!they looks so yummy and delicious

What a great use of the urfa-biber! Rhubarb sounds like the perfect substitute for pomegranate, actually - tart for tart. I love the idea.

I just love hearing about new foods - I feel so educated! The brownies look good and I am intrigued by the description. If I ever come across some of the urfa-biber, I'm definitely gonna pick it up!

What is that on top of the brownie in the bottom photo?

The chile pepper doesn't surprise me but the rhubarb sure does, Brilynn!

I'm not quite as adventurous as you - I draw the line at things that shudder on the plate - But I'm really curious about urfa-biber. There MUST be a source of it in Toronto! Kensington Market? St. Lawrence Market? The Thieves up by Summerhill? (I'm racking what's left of my brains to think of where the Turkish area of Toronto is....)

However, I'm guessing that a ground up morita (dried smoked ripe jalapeno) might be similar. Having tasted the urfa-biber, would you concur with that?

Sara- I sent Danielle some honey and another little gift that I won't disclose because she hasn't received it yet.

Brian- Rhubarb sorbet, it goes great with the rhubarb in the brownie.

EJM- I'm sure you must be able to find it somewhere in Toronto. The St Lawrence or Kensington would definitely be my first choice of places to look. Maybe the Danforth??
The urfa-biber has a fruitiness to it that I'm not sure the jalapeno has.

I live in Turkey, yet I'm not sure what you mean when you say "urfa biber." I went to the Kalustyan's website for possible clarification but the search conducted did not yield any such spice by that name. Possibly it's kirmizi (pul) biber? Yet with this, I don't recognize a raisin-y depth. Can you explain more? Thanks.