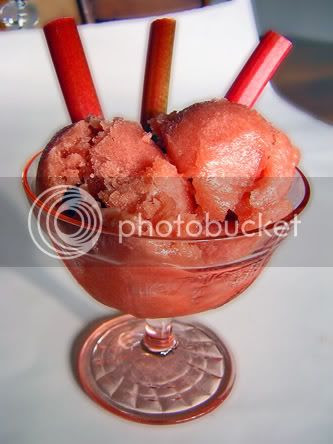 I never would have thought I’d do two rhubarb posts in a row. It’s not that I don’t like rhubarb, but there are many other fruits (or vegetables as the case may be) that I would tend to turn to first when baking/cooking. Mom is a big fan of rhubarb though and is always trying to get me to add it to my desserts. For the most part, I’ve resisted doing this and I think the reason is because I never believed that rhubarb would satisfy my sweet tooth.sweet. Rhubarb has been trying to vie for my attention my entire life, but it’s always lost the fight to chocolate for dessert supremacy. You have to give rhubarb credit though; it sticks around, returns to my garden every year and multiplies all summer long. And yet, despite its persistence, I’ve pushed it away. There was a time when I was little that I would eat rhubarb freshly plucked from the garden but only if I had a cup full of sugar to dip the stalk into before every bite. I don’t think I ever tasted the rhubarb, it was just an excuse to eat sugar. Now I’m beginning to realize that rhubarb deserves to be more than just a vehicle for sugar and it needn’t always be paired with strawberries in a pie to be tasty, (although that is delicious). Rhubarb can be the star of a dessert, such as this rhubarb sorbet, or it can lend a subtle background tang to something like Rhubarb Urfa-Biber brownies. It’s almost as though I’ve discovered a whole new flavour. Rhubarb is by no means new to me, but I’m only now beginning to learn how to use it to my tastebuds’ advantage. 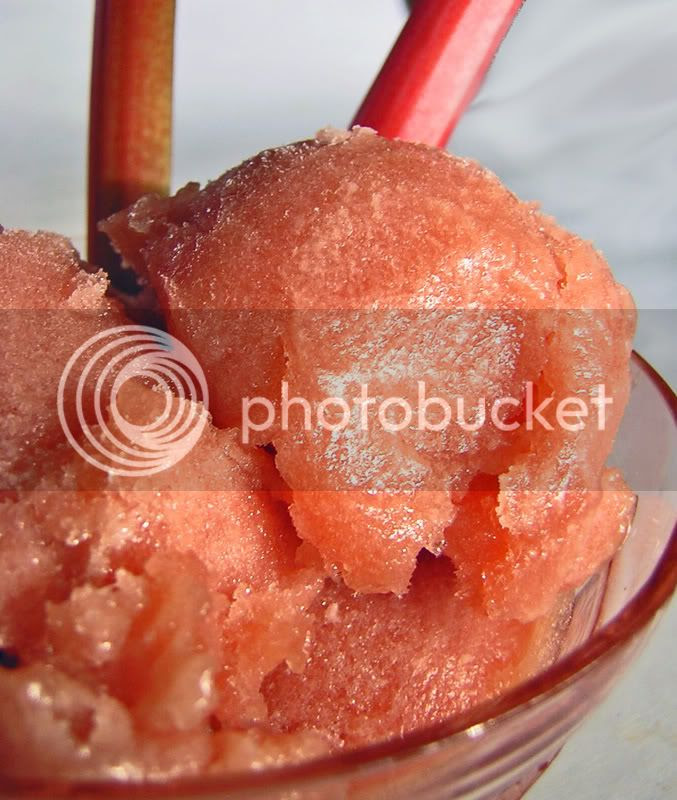 Zest of one orange

Toss together rhubarb, sugar, and corn syrup and orange zest in a large heavy saucepan and let stand, stirring occasionally, 30 minutes (to macerate).

Cook mixture over low heat, stirring frequently, until rhubarb has released about 2 cups liquid, 10 to 15 minutes. Increase heat and simmer, stirring frequently, until rhubarb is very tender, 12 to 15 minutes. Purée mixture in 2 batches in a blender until very very smooth (use caution when blending hot liquids… trust me). Transfer purée to a bowl, then set bowl in a larger bowl of ice and cold water and stir occasionally until cold, 10 to 15 minutes. Place in the fridge to cool completely then freeze purée in ice cream maker. Transfer to an airtight container and put in freezer to harden, at least 1 hour. 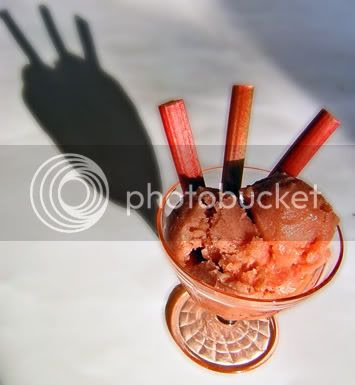 OK, I simply have to make something with rhubarb after seeing these delicious posts. I've always loved it, but it's not abundant here in Southern California, so I tend to overlook it. Not anymore!

Kiddo, I really need a bowl of that! NOW!
Geeze Louise that is beautiful!

this looks SO refreshing! i want some now, YUM. my momloves rhubarb too, she was just telling me about rhubarb pie made with this rhubarb that grows wild in north carolina.

Hmmm I'm not sure if I am brave enough to try this one or not. Was it sweet or sour?

Wow! I love the color of that sorbet! It's gorgeous!

I can so see rhubarb being good in a sorbet too.. wise choice! It looks refreshing & mucho delish.

Gorgeous. Rhubarb has been something I just cannot make my mind about. Do I like the taste - don't I. However, after seeing this I think I just have to give it another go!

I tend to find rhubarb works best with lots of sugar!

I wondered if that was what you had on top of the brownie in the last post. It sounds so refreshing! Your day with Dorie must have energized you for more kitchen creativity!

That is such a pretty colour, and I can imagine it tastes great too.

Last time I saw rhubarb here it was beyond expensive - I feel like buying anyway! It looks delicious, Brilynn!

Looks so refreshing...I think I would eat the entire batch in one sitting!

Yeah my mom pushed rhubarb on me growing up and I didn't like it. But now that my taste have grown I like it very much!!