Macarons vs. Brilynn: Round 3 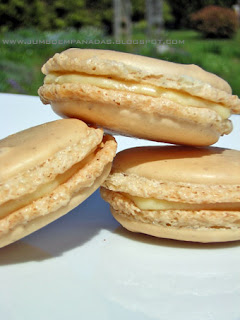 The macarons are currently in the lead 3-0 and they show no signs of going easy on me anytime soon. My whole obsession with macarons is completely ridiculous because I’ve never actually had a French macaron but it seems like everyone else and their dog has and they’ve blogged about it. It was only a matter of time before I jumped on that bandwagon and tried to make some macarons of my own. The first time around I used a Nigella Lawson recipe and ended up with a lot of burnt chocolate things. I refuse to call those macarons, because they weren’t. Most of them had to be thrown out and the rest looked like they had been beat with an ugly stick. Then, 5 months later after my wounds had time to heal, I tried again, this time with a Michel Richard recipe. I got one good macaron out of the whole batch. The rest were disfigured, let’s not rehash that pain anymore. As much as I like to play up my feud with Nigella, I know that both of my failures were due to personal error and not the recipes themselves. For some reason the art of the macaron eludes me. It’s been 5 months since my last macaron debacle so I was ready to try again. I was encouraged by seeing so many other people succeeding at making stunning and colourful macarons and then there’s that saying: If at first you don’t succeed, try, try again. Well I’ve tried and tried again and tried yet again and it still hasn’t worked! I feel like a gambler who keeps throwing money down, convinced that one of these hands I’m going to win the jackpot but instead I end up broke, forced to sell my house and live in a van down by the river. There’s only so many times you can attempt something before you have to admit that it’s not for you. And that’s really a shame because I’m constantly thinking of potential macaron flavour combinations that I’d love to try but at this point I think I’ll have to contract them out to other people to make for me. 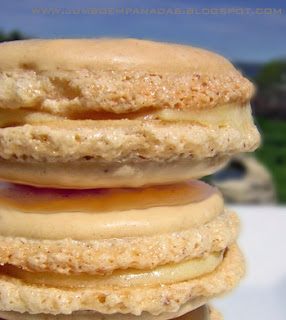 Most recently I tried making a rum flavoured macaron from this recipe from The Traveler’s Lunchbox which is by all accounts a wonderful recipe that has produced beautiful macarons for a great number of bloggers. The recipe is not the problem. I am the problem. I’m macaron-challenged. The macarons you see here are some of the few that turned out. I overbaked most of them, resulting in dry, brittle macarons which were only made partially salvageable with mountains of crème chiboust, (leftover from the mille feuille which was leftover from an as yet unnamed venture… oooh the suspense!). The handful of macarons that turned out properly were quite good though so the carrot is still being dangled in front of me, just out of reach, urging me to continue on with macaron making despite multiple failed attempts. I seem to be making them in 5 month intervals though, so you can expect the next macaron post to come sometime around October.

My bags are packed and I am coming to help out...just because you have been dangling fresh morels and homemade bacon in front of me!!
Email me your questions if you want.

But perhaps it's that 5 month thing. Perhaps you need to jump back on this one sooner than 5 months. Maybe with some magic words from Helen and only a 5 day or a 5 week interval the spell can be broken! May the force be with you.

Macarons and I are still not on good speaking terms. Not sure if you read my exploits, but I've had similar problems. I once made SEVEN batches in one day just to get some decent macarons. Just the other day I had another pseudo success/failure but I'm sure that the humid weather was against me. I continue to refine my recipe and my technique but I haven't made any major strides. I'm starting to think that a larger batch may be easier to produce than the smaller batches that I'm hoping for.

Awww, they look darn good to me. I hope you can get the hang of macarons, I still have to get the courage to try!

Hi Brilynn - Don't be too hard on yourself. I think every blogger experiences "Baker's Block" once in a while (everything I baked last week looked horrendous). If I were to attempt baking macarons, I would use one of Dorie Greenspan's recipes. She always explains each step in so much detail there is very slim chance that you can fail. I would also recommend Joycelyn's tips on baking macarons. Here is the link: http://brandoesq.blogspot.com/2006/04/macarons-my-chocolate-nemesis.html
Hope they turn out the way you like the 4th time around.

I have to say---I'm just dazzled by those gorgeous pictures

Macarons... I love macarons. But I have never even considered trying to make them! You ARE brave!

We had the most wonderful macarons that we got at the Lyon outdoor market that is set up beside the Saone River every morning but Monday. The macarons were bite-size marvels filled with chocolate and hazelnut cream (I think). We bought a rather large bag of them, thinking we would have a few right then, and the rest gradually. We ate them all. And went back to the stall to get some more....

Good luck with round 4, Brilynn!

I will admit that I have never had a macaron either. I have seen them on many, many blogs, and have been tempted to try, but I don't know if I am brave enough!!

I do love a good macaron! When I went to San Fran I had the best macaron at Miette, a wonderful bakery at the Ferry Building. Since then I too have been obsessed but I haven't had time to make them. I applaud your efforts, your pictures look great!

Chin up young daring baker. For ye shall conquer the small little schitz. Trust me.. you'll get there. You have to. I'm too afraid to try them so I need to live vicariously through you.

PS - The few that did work look amazingly good.. xoxo

I agree with the rest, Bri, the ones that did work look yummy, and with Helen´s expert help and a Dorie recipe, I think you can conquer macarons in less than 5 months :)

I never knew what these were. Years ago a friend from Switzerland mailed us a thank you gift of these "little pastel mini-hamburger looking things" (as we've called them for years). Then Voila! I find that they are macarons. I've become obsessed, about the same time as ya'll. I just haven't tried making them.

Humidity is bad? Then that is good, because it is very arid where I live. I might have to give it a try.

Anyway, the real point of this was to say KEEP TRYING and feel free to share morels and bacon with everyone.

I think that you should send one of those to everyone of us who have left you a comment! They look too good to eat.

I have a macaron recipe marked in one of my books, I think it's Bouchon. But if you can't do it, I'll never be able to.

Perhaps there is a 12 step program you can join :)

The ones you posted pictures of look very good with a nice "foot." Perservere- you shall conquer, intrepid baker! David Lebovitz has a nice post about and recipe for macarons. http://www.davidlebovitz.com/archives/2005/10/#000137 and scroll down a few posts. Good luck!

Don't fret, you'll get there, it took me five tries to get it right! Helen has a great macaron recipe. The ones that did turn out look lovely. Rum, yum :)

Oh Bri, 'macaron-challenged' - that's so funny how you write about you -v- macaroons! Your ones that turned out well are lovely.

Yours look really good (can't wait to see the next round)! Reading about macarons makes me want to try to make them too. Then I remind myself I shouldn't because I've never had one and I won't know how they're suppose to turn out or taste like. And there's a bunch of lingo I'm not familiar with, macaron feet?

Hey dear! I've succeeded in my macarons, finally! Maybe you'd like to check them out over @ my blog :)