From Out of the Ashes Rises a Winner 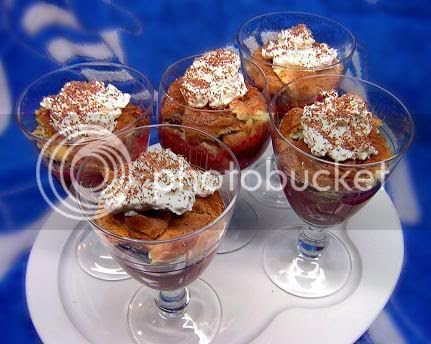 Sometimes I wonder if I don’t suffer from grandiose delusions. You see, I get these ideas in my head like “I can master macarons” or “I’m going to make a beautiful creampuff ring filled with chocolate pastry cream that will be even more impressive than the one in Dorie’s book!” HA! Who do I think I am, and what drugs have I been taking? Every so often I seem to leave reality and drift into my own little magical kitchenland where I’m an expert baker and creator of all things good. What usually pulls be back to the real world is the incessant beeping of the smoke alarm. My recent baking adventure was no exception. I must begin by apologizing to Dorie for massacring one of her beautiful recipes. It was entirely my fault, (obviously) there’s nothing wrong with this recipe and I encourage you to give it a try.

Now then, one of the things I love about Dorie’s book Baking: From My Home to Yours, is that for each recipe, there’s a section on the sidebar called “Playing Around”. This offers a variety of ways to change the recipe slightly, without turning it into a disaster, as is so often the case when I decide I want to tweak a recipe without ever trying it in the first place. The original recipe in the book (and stunning accompanying photo) is of a giant Peppermint Creampuff Ring. The Playing Around section suggests that you can fill the creampuff ring with any variety of pastry creams, such as chocolate, for which there’s also a recipe. I’m a big chocolate fan so I decided to skip the peppermint cream and go straight for the chocolate. Then I read and reread the recipe to make sure I would do it right. 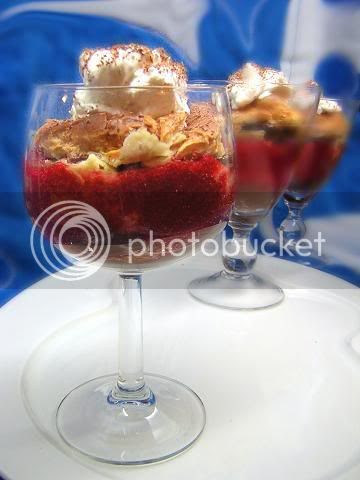 It seemed easy enough as there were 3 distinct parts: the creampuff, the chocolate pastry and a chocolate glaze. I failed on 2 out of the 3 parts and the only reason I didn’t fail on the third part was that I didn’t attempt it, (I guess maybe that constitutes a fail as well?) And just how did I manage all of this? Well, I was supposed to pipe out the creampuff ring as 3 rings, one inside of the other. Of course, I didn’t make the rings large enough, nor did I seal the edges together very well, (that’s also how I ended up with bagels that looked like horseshoes) and so the ring didn’t hold together as a ring. I also burned the bottom. At the same time as this was happening, I was trying to make the chocolate pastry cream, (here’s where the smoke alarm comes into play) and the milk boiled out of my tiny saucepan and spread all over the place. Not only did it start to burn on its own burner, but it spread to a second burner that I had turned on for the second part of the pastry cream. Despite the fact that I had two smoking burners and a screeching smoke alarm, I had to turn on a third burner to finish the pastry cream because I was half way through and didn’t want the eggs to scramble. Oh, and I was trying to melt chocolate in the microwave during this whole fiasco as well, which I also managed to ruin by overheating. Despite my attempts to save it, my pastry cream turned out more like thick chocolate pudding due to the large quantity of milk that was scorched on my stovetop instead of in the pastry cream.

As things calmed down and I opened some windows to clear out the smoke, I surveyed the damage and realized there was no way I could serve this dessert in the manner in which it was supposed to be done. Tears were the first thing that came to mind. First the macarons, now this, things were not going well in the baking department, (and I was plummeting off of my grandiose high). But I swallowed those tears as I recalled an inspirational post by Peabody of Culinary Concoctions by Peabody. I remember this post so clearly because when I read it I was infinitely impressed with the way Peabody turned a disaster into a great success. The pictures also had me drooling for days… She took a cracked cheesecake and turned it into a completely different and original dessert, genius. And so as I looked at my misshapen and half burned pastry blob and my thicker than thick chocolate pudding, I asked myself: “What would Peabody do?” 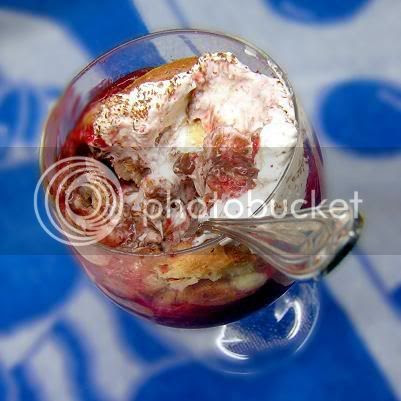 The answer that I came up with is my resulting dessert which I have dubbed a Victory Cup for the following reasons; 1-my dessert was a victory over kitchen defeat, 2- it’s served in a cup, 3- I couldn’t think of anything else to call a dessert that has chocolate pastry cream, strawberry and Malibu puree, cream puff pieces, coconut whipped cream and chocolate shavings. Yes, you read that correctly, all of those marvelous things were combined into a singular dessert. I salvaged the cream puff by ripping off and discarding the burnt bottom and then tearing the nicely golden top half into smaller pieces. The chocolate pudding tasted just fine on its own, so I didn’t have to fix anything there. I considered layering these two elements in a cup, but it didn’t have enough colour, it just looked like a failed creampuff in a cup. Then the wheels started turning and I pulled a bag of strawberries from the freezer, to this I added some sugar and the end of a bottle of Malibu and blended it into a puree. This puree was so good I could have eaten it alone for dessert. But I wasn’t done there. Oh no! Then I made some coconut whipped cream to add some contrast and to complement the coconut flavour of the Malibu. It was only after I had all of these components together that I could layer them into a glass cup and then cover the top with a light dusting of chocolate shavings. And that my friends, was how the Victory Cup was born. I wouldn’t lie to you, it was amazing. I should ruin desserts more often. Just joking, I hope the kitchen Gods didn’t hear that… I didn’t mean it, I want nothing but success, success! This was indeed a success though, I actually licked my cup clean, which wasn’t an easy feat considering the depth of the glass. My guests also thoroughly enjoyed it, (as judged by the hushed silence that fell over the table as everyone devoured their desserts) and no one was any the wiser that it was a far cry from my original intentions. I hope I've made Dorie proud, even a ruined recipe from her book is a fabulous one.

In completely unrelated news, (or maybe it is related, depending on how you look at it…) I recently discovered a new word that might aptly describe me, plus it’s fun to say: Flibbertigibbet. \FLIB-ur-tee-jib-it\, noun: A silly, flighty, or scatterbrained person, especially a pert young woman with such qualities.

Don't we all pray for those hushed times of silence!! You're just having too much fun.

Don't you just love it when you can feed yourself rather than the garbage disposal? Congrats on salvaging the dessert - the revised dish looks delicious, sort of like an exotic trifle!

Woohoo! Congrats on the marvelous looking Victory Cups! Am glad your disaster was turned into success ;)

Love the victory cups! Brilynn I love getting wrapped up in your wonderful stories! Keep them coming! By the way, how do you make coconut whipped cream? With extract?

Whatever drugs you are taking...I want some to make those!

Well done! I think Dorie would be beaming with pride. :D

Quite frankly (and puh-lease don't tell Dorie) I'd prefer your dessert over hers.

You know what I love about you? You are so real! You don't pretend to be the perfect chef... you challenge yourself and are open with the results, good or bad. I also love the fact that you didn't give up with this. They look fantastic!

I totally agree with you, things in the kitchen get messy sometimes and chefs definitely mess with our heads by making us believe everything should be perfect.

That was a great way to save your dessert. It looks amazing, if only the spoon in the pic were within reach...

By the way, I´ve just tagged you for a 6 weird food things about yourself meme.

you have very impressive photos. i wholeheartedly agree (is that one word?) - that word is perfecto

LOL- what would Peabody do...I would have done what you did...great save!

There you go! I totally admire how you turned your macarons into a huge winner. I wish I could dig my spoon into those treats.

After holding my breath in fear of what would come next, I'm sitting here with a huge grin on my face - what a story and what a fabulous storyteller you are! Love the name Victory Cups and love the way they look.

And, by the way, chocolate pastry cream is thick and might double as chocolate pudding. Maybe you only had problems with 1 out of 3 parts.