Guard Your Blogs, I'll Steal From You Too 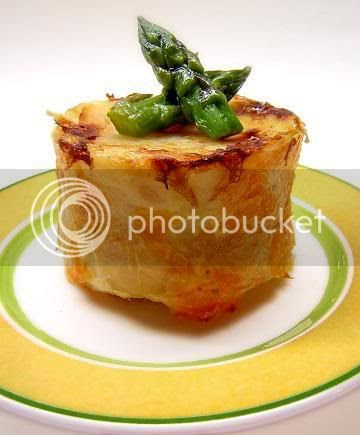 Does this look familiar? It will if you’re a regular reader of La Tartine Gourmande. The other night I was looking for a potato recipe and I came across this recipe by Bea for a Potato, Fennel, Pear and Fourme d’Ambert Timbale. Oooh, it even sounds fancy! As amazing as Bea’s timbale sounds though, I didn’t have all of the necessary ingredients to make it. I don’t think that’s ever stopped me before, so I made a few substitutions and carried on. I also opted to rename my version a Tater Timbale, because I like alliterations and because it’s shorter than Bea’s sweeping title.

I think the reason I was most drawn to this recipe, (besides the beautiful picture on Bea's site) was because it let me use my new mandoline. It’s been sitting in its box for the past couple weeks, just dying to be used. The mandoline was a gift to myself which I deemed absolutely necessary and therefore bought it after no one else volunteered to. Luckily it was over 50% off, score! If you don’t have a mandoline, you need to get one. I was making perfectly even slices in seconds, with no effort at all. And with 3 different blades, the possibilities are endless. I sound like an infomercial, but it’s true! Once you try the mandoline you’ll want to slice everything. Nothing’s safe in my kitchen. Not even my fingers…

Don’t let my mandoline distract you though, let’s pay attention to what’s really important here; not only have I stolen Bea’s recipe, but I’m also entering it into Weekend Herb Blogging which is being hosted this week by Scott of Real Epicurean. Weekend Herb Blogging was originally started by Kalyn of Kalyn’s Kitchen, with the goal of having weekly roundups of posts featuring herbs, plants, vegetables, and flowers. 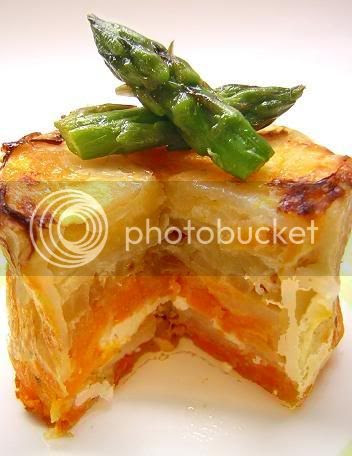 Any number of elements would have qualified this timbale for Weekend Herb Blogging; the asparagus, the fennel, the potato… But I’ve chosen to focus on the fennel because it’s probably less well known than the other two. Fennel has a flavour similar to anise, but a little more mild. And as an added bonus, you can cook with the seeds, bulb and foliage. Yes folks, fennel will give you its all and leave you wanting more. It was an excellent addition to my Tater Timbale and would be an excellent addition to your table as well.

Steps:
• Butter your ramekins and line them with sheets of parchment paper.
• Preheat your oven at 350 F.
• Peel and thinly slice the potatoes and cook them for 5 to 7 mns in salted boiling water.
• Slice the fennel thinly and cook for 7 mins in salted boiling water.
• Peel and core the apple. Slice it thinly (add a few drops of lemon to prevent oxydation).
• Slice the onion and cook if for 10 mins in olive oil with the garlic, until soft.
• In a bowl, beat together the eggs and milk, and season with salt and pepper. Add the nutmeg.
• Line slices of potatoes around the edge of the ramekin and place a few at the bottom. Keep them tight.
• Continue with a layer of onions and a layer of fennel and pear slices and cheese.
• Continue layering until you run out of room.
• Pour in the egg batter, making sure that it goes down all the way to the bottom.
• Cook in the oven for 45 to 50 mins. Check whether the top potatoes are cooked and wait a few mins when taking out before unmolding on a plate
• Garnish with asparagus tips, (I served the rest of the asparagus separately in a balsamic vinaigrette with parmesan).

whoo hoo! I'm impressed. This looks exactly like Bea's version. I'm sure it tasted delicious too!

Stunning! I've been pining for a mandoline for ages, seeing your beautiful results only makes the desire stronger!

That's gorgeous! I've never heard of such a thing before.. I want to make one right now!

You did a beautiful job =)

What brand of mandoline do you have? I want to get one!

Isn't that why we are all food bloggin...to share with one another? :D

Brilynn, I saw this on Bea's site the other day and I thought about trying it out...I like your alterations so I might just have to try yours out! It looks delicious.

Guard you blogs thats good. I think I saw your comment at Bea's right before mine. This is one you can look at and know it's really a winner. Good job!!

cross-pollination makes the blogosphere go round :)

Not only is it gorgeous, but because you used cheeses other than blue cheese, a) I may actually try it at home (I don't like blue cheese) and b) I will add it to next week's Gluten-Free Recipe Round-up. Blue cheese unfortunately often contains gluten due to what they grow the mold on. Wierd, huh?

Simply fabulous!
Copying is the sincerest form of flattery.

Stealing? It's called sharing!! Anyway I had my eye on those too hehe! Your's look great!

Yes beautiful Brilynn. I am so happy you made these and enjoyed them. Your version looks beautiful!

These look totally fab Brilynn, Bea must be proud!

Is this a new theme I see for your blog, too? Very smart!

Beautiful job on this post. The photos are awesome and your adaptation of the recipe sounds great. I have a great mandoline (which I got as a gift from a student - how fabulous is that?) but I've never made anything this impressive with it!

wow brilynn, this looks fantastic. glad to see recipes passing from blog to blog too.

Brilynn, that looks fabulous and its making me hungry. Enjoy the mandoline and watch those fingers!

Got to know of your blog through WHB. That is a very artistic picture you got there! Very impressive!

Oooooh, a Potato Timbale! I may have to steal this from you....
Never thought of adding eggs to potato gratin-y things but it held together and looks beautiful!

Brilynn - I would like to include this recipe as the "featured recipe" in this week's gluten-free recipe roundup. May I use the photograph? (Credit will be given to you for the photo and to both you and Bea for the recipe, of course). Please e-mail me: glutenfreebay at gmail dot com - Thanks!