My Husband Cooks is hosting their first blogging event called Food Blogger’s Geography. The theme is Southern Style and they’ve left that wide open to interpretation. You’re welcome to cook Southern American or South Pole cuisine, they’re flexible. I like having that freedom although often when I have to make a lot of decisions, nothing gets done. I just sit and read cookbooks and look at recipes for hours on end. That would also be the reason why I’m entering my submission on the day of the deadline, I actually thought it was yesterday and I had missed it, but nope! Anyways, my decision was made slightly easier because we always have fish on Fridays, so I only had to decide how to make the fish Southern. After leafing through a stack of Bon Appetit magazines I decided to combine a couple of their recipes to make one of my own. From Mahi-Mahi with Blood Orange, Avocado and Red Onion Salsa from the February 2005 issue and Shark and Bake from the May 2006 Caribbean issue, Captain Brilynn’s Caribbean Catch was born, (and yes, I like alliterations, I even considered changing my name to Crilynn for the occasion).

Marinade:
2 garlic cloves
Bunch of cilantro, chopped
Juice of half a lemon and a whole lime
Half a scotch bonnet pepper, minced
Splash of orange juice 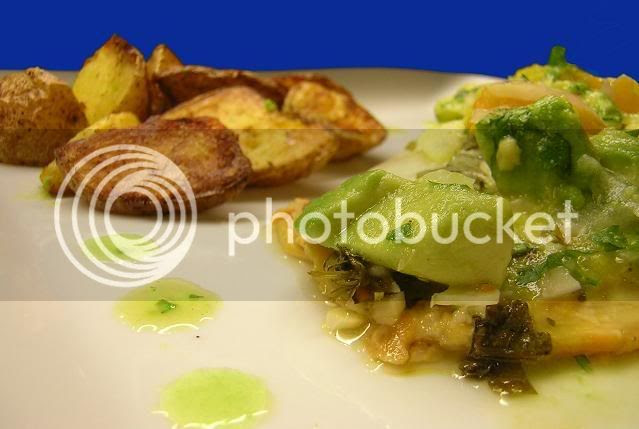 Preheat the oven to 375F. Mix the marinade together, pour it over the tilapia and let sit for 20-35 minutes. Put into the oven for ~10 minutes, or until fish is cooked through. Mix the salsa together and spoon over the fish when it comes out of the oven. Easy.

So what did it taste like? The Caribbean is hot and so is my food! I love scotch bonnet peppers, they add great heat but aren’t overpowering (when used in moderation). Tilapia is a pretty mild fish so the citrus and spice complimented it nicely, and the smoothness of the avocado helped to balance out the scotch bonnet’s heat. If, heaven forbid, you don’t like cilantro, I’m sure some other herb would substitute nicely, but I like cilantro. I served it with some spice roasted potatoes, they’re even better than french fries.

This recipe is a keeper, now I just need a Juba to cap it off. And a trip to the Caribbean.

Captain Brilynn, I think I totally dig your style (and kitchen prowess!). Whilst feeding your crew this well, there's not a question of any sort of mutiny on board :D

Ahoy there Captain Brilynn!
This sounds a looks absolutely super yummy! Thanks for sharing.

I'm not a huge fish fan but everything accompaning it makes me want to try!

i saw that shark bake recipe at bon appetit and i copied the recipe too. i guess it's soo good, eh?

I adore seafood; and this dish left me drooling! Looks scrumptious Bri. The combination of fish and avocado is never a disappointment! yummmm