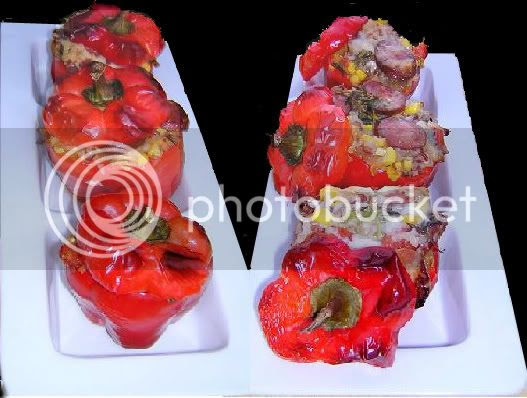 A lot of my inspiration to make things comes from other blogs that I’ve read. Sometimes my end product looks similar, sometimes it’s completely different. Recently a lot of people have been getting stuffed; Meeta of What’s For Lunch Honey? made stuffed Greek tomatoes, and Jeff of C for Cooking made stuffed peppers, just to name a couple. After thinking about this for a while I finally got around to doing some stuffing of my own. I opted for peppers as I had picked up a basket of them at the farmer’s market along with some onions, corn, chorizo sausage and a few other goodies. I was also anxious to use my new Australian ground bush tomato spice from Ellie of Kitchen Wench. It was a match made in heaven.
I didn’t follow any sort of recipe but just used the ingredients I had on hand and I must say, it turned out very nicely. When all was said and done my peppers had been stuffed with wild rice, onions, corn, tomato, chorizo sausage, old cheddar cheese, mushrooms, a hot jalapeno pepper, Australian ground bush tomato and some parsley. The whole thing went in the oven until the peppers were soft and delicious. Stuffed peppers make a great side dish because the variations in the recipe are infinite. You can basically just use whatever you have laying around, if you want to use up a bunch of veggies, stuffed peppers are great. They’re also pretty enough to prepare for guests, you never know what you're going to find when you take off the lid.
To finish off my dinner I had some white fish with a chermoula sauce that I found in my new Australian delicious. magazine, no pictures of that one, but it was something different to make and fish is always easy. I love new things!

Oh man...if I didn't have to make my stuffing vegetarian for my veggie wife I'd SO love one of your peppers!

What a wonderful way to use the ground bush tomato! I must give this a try! Glad to hear that you're liking the mag ;)

Do I ever love peppers. I was mad because my bells didn't do very well this year. Your look so good.

Hi Brilynn -
You're absolutely right about stuffing peppers with things that you have in your kitchen ! Let your imagination do the cooking, looks delicious!

Good that you decided to make your own stuffed peppers like other bloggers!! Looks delicious and very colorful!! Yummy!!I will be back for more!!Thanks!!

I would love to have one of those! Beautiful!

Gosh, they do look gorgeous. Also love the idea about using what is in the kitchen. Glad you liked the stuffed tomatoes!