A Bagel To Call My Own 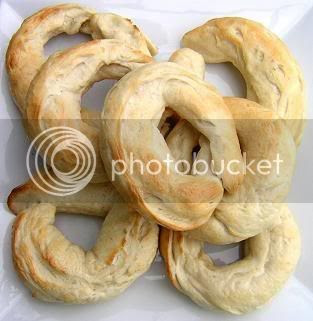 Despite the fact that I don’t really get along well with things requiring yeast, I keep trying. This recent adventure with yeast is a result of Nigella and her recipe for bagels. And it actually went very well! Maybe it won’t take so long for me to become a domestic goddess after all…
I set to work making the dough last night, Nigella warned that this was seriously dense dough and that it would require a whole lot of muscle or about 10 minutes with a dough hook. I’m not against manual labour so I let Wilbur, (you might know him better as my beautiful new Kitchenaid, but he will henceforth be referred to as Wilbur) do the first 9 minutes of kneading and then I took over for the 10th. Nigella doesn’t lie, the dough was thick. Instead of making the bagels last night though, I decided to let it rest overnight in the fridge, I had seen Alton Brown do this and I’d trust any of his methods to work. This morning I pulled the dough out, kneaded it again as per the directions and then shaped my bagels.
Bagel making is a two step process as you poach them first and then bake. I got a big pot of water boiling and then dropped in my first two rings. It was pretty neat. The bagels go in for 1 minute, and are flipped half way through. A couple of my rings weren’t very securely attached and separated into c-shapes during poaching but I had plenty that worked out near perfectly so I was ok with those ones. I always eat my mistakes. From the boiling water I transferred the puffy wet bagels into a very hot oven. Nigella suggested 500°F or as hot as your oven would go. They started steaming immediately when I put them in, creating a nice crust. 10 minutes later bagels were ready! I ate one immediately, hot out of the oven with butter and I was surprised to find that I had actually made bagels. These weren’t just rings of bread, they were real, chewy bagels with a nice, slightly crisp exterior. As with homemade bread, bagels are exponentially better when made at home as opposed to being purchased from the store where they've been sitting on a shelf forever. I just don’t know why it’s taken me so long to realize that bagel making is a possibility. I’m discovering new things everyday. Jam’s easy to make, bagels are easy to make, there’s no end to the madness! 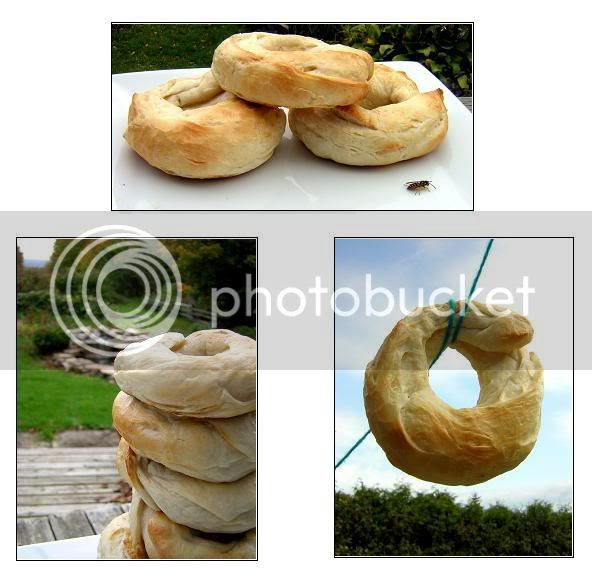 Evidently, once the bagels were made, I also enjoyed taking their picture. It was such a beautiful day that I decided to do this outside. I was having fun until the wasps started attacking. I then proceeded to run around the deck flailing my arms and yelling obscenities at the wasps, trying to escape them. This only made them angrier. My anger one upped theirs when they started chasing not only me, but going after my precious bagels as well. It was time to retreat to the house but as I reached to grab my plate of bagels, a wasp had beat me to them. So I took his picture. And then ran in the house.
Alternate titles for this post: “Excuse Me Waiter? There’s a Bee on My Bagel” or “Tower of Bagel”… I like bagels.

Woohoo! Congrats on the bagels, those photos are fantastic - hope you didn't get any stings!

I want jalepeno cream cheese on mine!

lol...I love the pics. So glad you braved the bees to satisfy that crave to look.

Now I need to try the recipe.

Ok, I have decided, after much though, what you should do with the rest of your life... Well, at least the next 6-9 months... You should write a book... I would read it for sure.

This entry was very witty... not as witty as me just yet, but, you are getting close!!

I loved this blog entry! I found myself laughing along with you whilst reading about your mishaps with the wasps and the bagels coming undone. The photographs were gorgeous, especially the single bagel hanging on thread. <3 Keep up the awesome work brilynn! I adore your blog, it puts a humourous yet ambitious light on cooking thats motivational and fun!