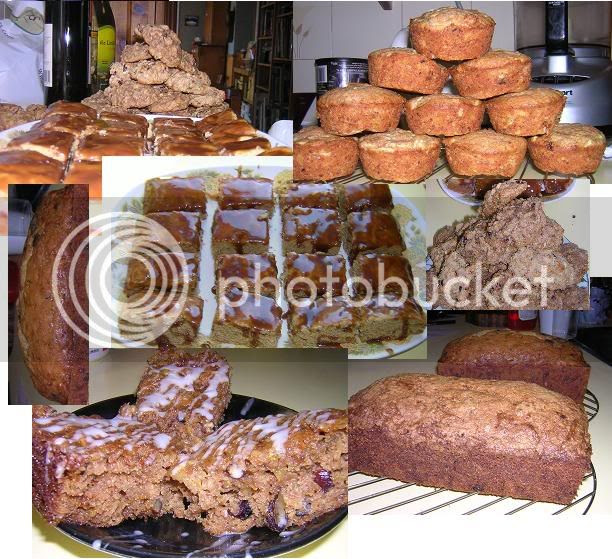 Last weekend I was away for a few days at a family reunion and when I returned a mere 3 days later there had been another explosion of zucchini growth. At this point Dad is getting thoroughly sick of zucchini and has suggested on more than one occasion to “chuck ‘em into the woods” and be done with them. But I just can’t do that so I’ve been desperately trying to figure out more ways to use up the zucchini. In fact, that whole pig roast thing was simply a tactical maneuver on my part. You see, while everybody was inside enjoying the pig I snuck out and stuck a zucchini in each car, (seriously, I did). They were taking one home whether they knew it or liked it or not. I thought that would take care of the zucchini, but the following morning when I was touring the garden I found even more of them. It was time to start baking again. They may not accept zucchinis, but people will always accept baked goods, (more easily if you don’t tell them there’s zucchini in it). This is what led to the creation of oatmeal-raisin-zucchini cookies, zucchini spiced bars with caramel sauce, raisin-bran-zucchini muffins, orange-chocolate- zucchini loaf, coconut-walnut-cranberry-zucchini loaf and iced spiced-zucchini bars with cranberry and pecans (recipe for the last one courtesy of Culinary in the Desert).

I have tamed the zucchini… for now.

Could make some fried ones ;) I saw that Mario made some the other day...looked incredible.

You're amazing! Thank you so much for stopping by Cream Puffs in Venice and for suggesting all these wonderful ways to use the zucchini that are slowly but surely taking over!

You have a wonderful blog!

Yum! My mother made THE best zucchini bread. I must make some soon! Oh, and I agree with wheresmymind, fried zucchini is most delicious.