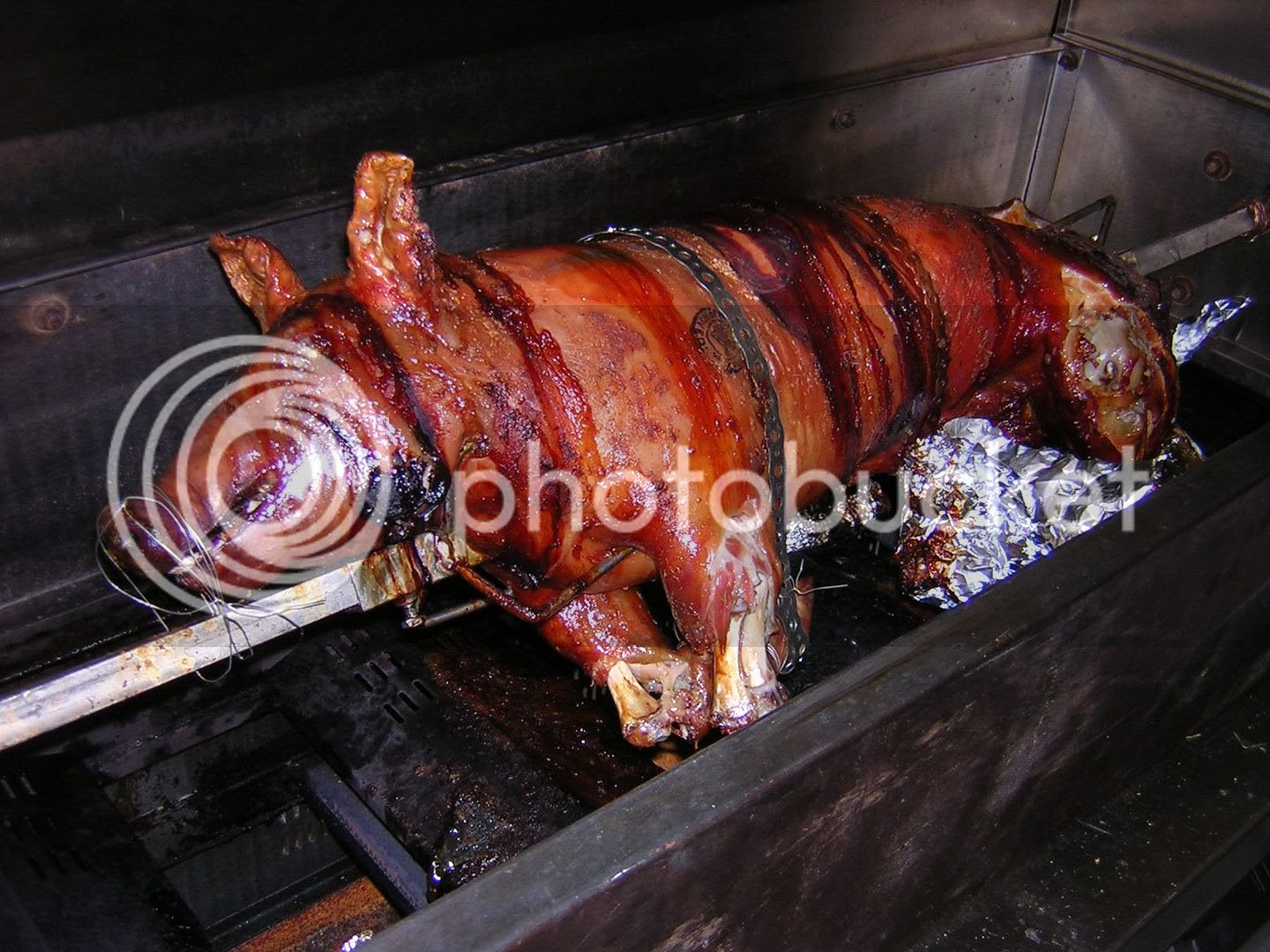 One of my most fond childhood memories are the summer pig roasts that used to happen with my family and some of our good friends. Pig roasts were a day long affair with lots of food and drinks, sunshine and great times. And as can be expected when my Dad has a hand in things, it was never a small pig. Not by a long shot. We would roast a bonafide, 70 pound beast! We could have fed an army. Of course, when you’re cooking something that big, you’re going to need a special contraption, an ordinary bbq will not do the trick. Not a problem, Dad and his friend made their own spit out of a huge old oil barrel, with the rotisserie powered by the motor of a recycled lawn mower. Dad’s resourceful like that. The spit was wood burning and produced lots of smoke that you could smell for miles. The nearer the pig got to being done, the closer I would stay to the spit because I knew that when Dad opened the hood to check the pig he’d break me off a piece of crispy skin to snack on. The pig would cook until the meat was juicy and tender and no one could wait any longer to dig in. It was always delicious. The pig roast was an annual summer event until the year our friends moved away and we soon followed with a move of our own, leaving the pig roasting tradition behind us.

Over the years we’ve always recalled the summer pig roasts with fondness. Many times we’ve talked about having a roast but nothing ever comes of it. It looked like it might happen at my family reunion last year and then again this year, phone calls were made, but in the end we had hamburgers and sausages like every other year. After coming so close to finally getting another pig roast, the issue wouldn’t die down. Dad and I were especially keen on keeping the flames burning and at every opportunity would make subtle attempts to persuade others that a pig roast was a great idea. For example:

Our efforts were eventually rewarded. Some time after our Asian themed dinner, (when my brother and family were visiting) we decided we should start doing regular theme dinners with the Quiggies and anyone else we could get to join in. I suggested a Mexican theme for our next venture and the wheels were in motion. A pig roast could definitely fall within the Mexican theme and as luck would have it a new butcher shop had just opened in town (with pigs available to order) and Dad had seen that the hardware store rented spits. I would once again have my pig roast! 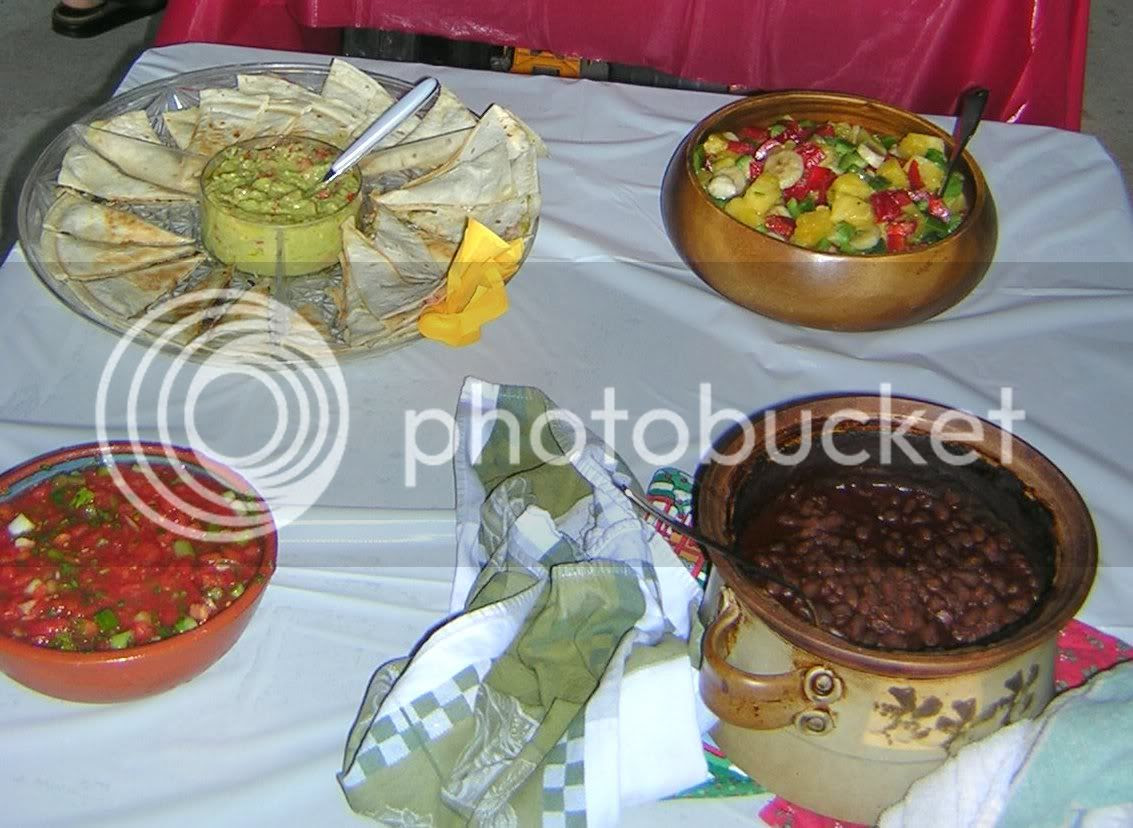 Granted, no pig roast now could ever compare to the ones from my youth, but the smell of the pig on the spit sure came as close as it could to bringing me back there. This year however, the spit was rented from the hardware store, used gas instead of wood and the rotisserie was powered electrically, presumably with a motor designed for that purpose. Dad tried to make up for the gas power by putting packets of woodchips below the pig to make smoke. We had a good sized group of people joining us, about 20 of them, but none of the original crew. The pig was not nearly the size it once was, at 28 pounds it was more piglet than one of the beasts we had done before. Dad gave him a little extra weight by stuffing him with venison. 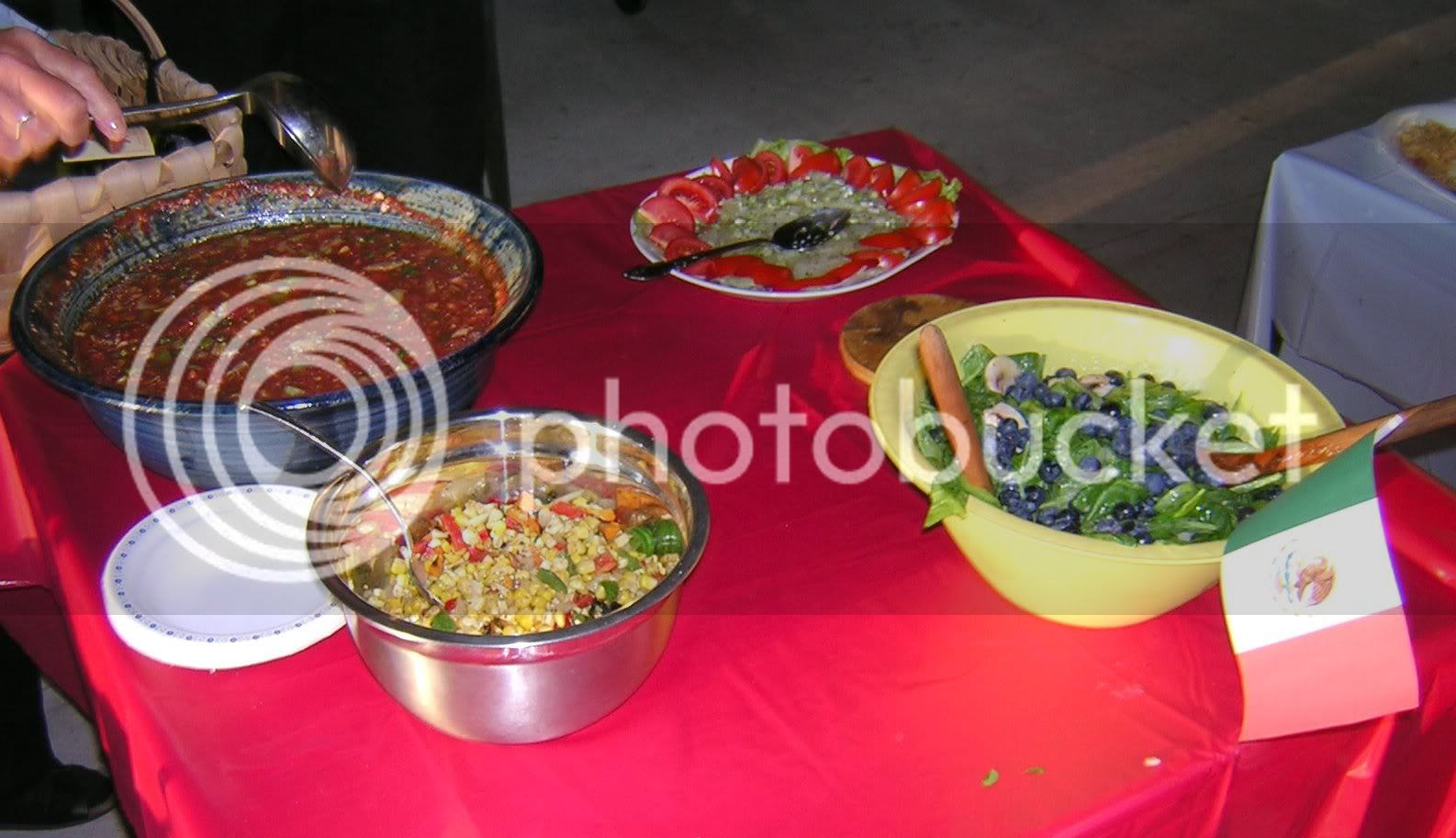 Since we had a Mexican theme, everyone was to bring an appropriate dish with them to accompany the little piggy. We had some gazpacho, quesadillas, nachos, salsa and a decidedly un-Mexican salad of spinach and blueberries which was allowed a spot on the table because they stuck a Mexican flag in the bowl. I also made a grilled corn salad and baked beans. The desserts did not even make an attempt to be Mexican, as people arrived with a store bought cheesecake, and a peach cobbler of sorts. I, on the other hand, took a chocolate cookie recipe which I had seen over at The Candied Quince (thanks for the recipe) and decided to make it my own ‘Mexican cookie’ by adding cinnamon and some hot pepper. Cookies with attitude. The hot pepper actually ended up being a mixture of cayenne, ancho chilli and habanero, as I kept adding more to get just the right amount of spiciness. Hot pepper in cookies may sound weird, but trust me, these were great, sweet with a hot aftertaste. There were none leftover at the end of the night.

never been to a pig roast....next year I'm inviting myself ;)

Next year everyone's invited so that I don't have to deal with the extra! I love the pig roasts but you can only re-invent leftoevers so many times...

That looks superb - I can taste it from here!

I like your blog, but I think your smaller pics are more effective. On my full isze screen (desktop) it's OK, but the larger pics on my laptop are troublesome. I don't get the full effect.

I am defitinely ready to roast a pig now!

Brilynn said...
This comment has been removed by a blog administrator.
9:28 p.m.

thanks for the feedback, i wasn't aware that some pics weren't displaying properly, i'll try to fix that next time