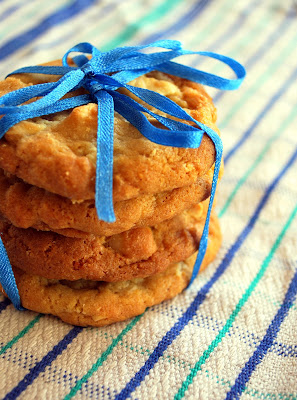 Based on my experience, all landlords are crazy. And not in the “ha-ha, that person is so fun and crazy!” kind of way, but more like the “aahhh, that person is a complete nut job and should be committed” kind of way. If your landlord is not like this, then perhaps I just attract crazies? I really don’t know why. I’m a good tenant, I pay my bills on time, I’m quiet, I don’t throw parties and I’m likely to be regularly baking up yummy treats and looking for people to give them away to. When I moved to New Zealand I thought that maybe my landlord luck would change, being on the other side of the world and all. Not so. My crazy landlord here has that same quality of craziness that my other landlords have had, just with a Kiwi accent.

She’s thoroughly entertaining though, the kind of person that other people want to hear stories about, but don’t actually want to know. For privacy’s sake, let’s just call her Karen. Karen is a petite woman with wild hair that she tries to tame by securing half of it into a low side pony, while allowing the other half to roam free. She’s got nimble little hands that she uses to make gestures while she talks and I could see her being good at untying knots or burying nuts in the ground like a squirrel. I believe she’s somewhat of an insomniac and also potentially has Obsessive Compulsive Disorder. She likes things to be placed in very specific places and is visibly disturbed when they’re not where they belong. She’s also got some interesting eating habits. She only eats singular items in a sitting. For example, for lunch she’ll eat three hard boiled eggs, in proper egg cups, but with nothing else. I saw her go through a mushroom phase where she ate only stir fried mushrooms, a big bowl of them. And she routinely used to make large quantities of oven baked potato wedges to enjoy once again, on their own. I never inquired about her eating habits, just observed them with amusement. Perhaps you’re wondering how I know all of this if she was just my landlord, well it turns out she became my roommate as well! When she initially moved in, it was under the guise of doing some fixing up around the apartment but after a few weeks I realized that no fixing was being done and it seemed that Karen was there to stay. She called it camping out and said how much fun it was to have a roommate again! Lucky me. 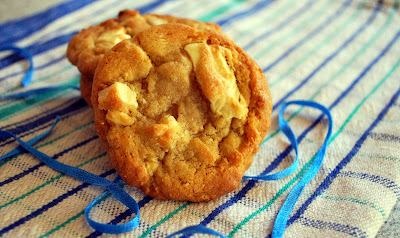 When it came time to break the news to Karen that I would be moving out, I had a feeling she wasn’t going to take it very well. The mere thought of it was making me uncomfortable as I highly dislike confrontation. To soften the blow I decided to bake some cookies to give her along with the bad news. No one could possibly be mad at me while eating a delicious White Chocolate Macadamia Cookie, could they? 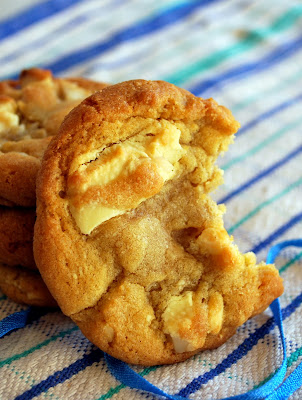 Heat oven to 375 degrees F.
Melt the butter in a heavy-bottom medium saucepan over low heat. Sift together the flour, salt, and baking soda and set aside.
Pour the melted butter in the mixer's work bowl. Add the sugar and brown sugar. Cream the butter and sugars on medium speed. Add the egg, yolk, 2 tablespoons milk and vanilla extract and mix until well combined. Slowly incorporate the flour mixture until thoroughly combined. Stir in the chocolate chips.
Chill the dough, then scoop onto parchment-lined baking sheets, 6 cookies per sheet. Bake for 14 minutes or until golden brown, checking the cookies after 5 minutes. Rotate the baking sheet for even browning. Cool completely and store in an airtight container.
Posted by Brilynn at 4:47 a.m.

Hope the cookies worked :) Haven't encountered any crazy landlords yet, but don't get me started on taxi drivers!

I loved this post! But now I want to know what happened next. Did the cookies work? How did she take the news? They look delicious, by the way.

I'm lucky in that I've had the most wonderful landlady for the past 3 years. She's really very cool and I'm super blessed to have her. Even though at times I'd like to move to a bigger place, I think the thought of not having such a cool landlady in my life keeps me put.

There are crazy co-workers, too. Guess I should make some of these for her to improve relations. They look fabulous!

I tried this recipe last night, and they came out great! More crunchy than chewy, but maybe I'll undercook them next time so when they cool they'll still be chewy. Anyway, thanks for sharing! They were delicious!

Those cookies look really good! Thanks for sharing the recipe and thanks for visiting my blog!

Loved this recipe, and will add it to my "Best macadamia Nut Recipes" blog over at Squidoo! I Used fresh Hawaii macadamia nuts for this recipe. I get mine from www.maunakeagold.com. In my opinion, Hawaii produces the best Mac Nuts!