Cooking My Way Around New Zealand 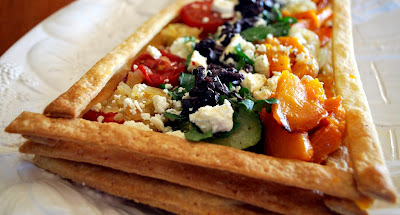 Free Form Veggie Tart
Hands up all of you who have heard of Helpx! How about WWOOFing? While WWOOFing seems to be the one that’s more commonly known, both operate worldwide under the same sort of umbrella, providing room and board in exchange for labour, (Helpx stands for Help Exchange and WWOOFing stands for Willing Workers On Organic Farms). The difference between Helpx and WWOOFing is that Helpx is much more broad based. Whereas WWOOFing hosts are looking for workers to pitch in on predominantly organic farms, Helpx hosts request assistance with a wider range of tasks. Helpx tasks might include farming but it could also be painting, home improvement, child minding, gardening or cooking, just to name a few examples. 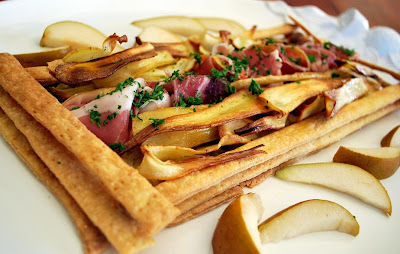 Pear, Prosciutto and Parsnip Tart
I had never heard of Helpx until a few months ago when my cousin told me she was planning a trip to Europe and was going to use Helpx as a way of stretching her travel funds as well as a unique way to see a number of countries and get to know the local people. When she told me about this I was already in New Zealand and was starting to think about getting a job instead of just wandering aimlessly about the country, as I had previously been doing. But instead of settling down in one location to look for paid work, I started to use Helpx. The beauty of this system is that as opposed to getting a regular paying job which ties you to one location, with Helpx you can work for as little as a few days in each location, allowing you to see more of the country. At this point you’re probably wondering what Helpx has to do with a food blog. Like I mentioned, one of the tasks that Helpx hosts request assistance with is cooking so when I perused the Helpx ads I looked for hosts who would welcome a cook into their home/hostel/lodge. 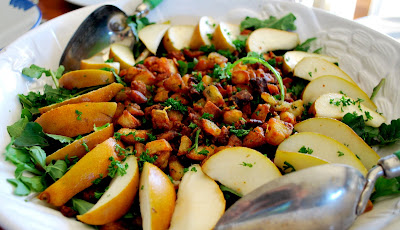 Duck Fat Fried Potatoes on Salad with Pears
In the end I stayed at 5 different Helpx locations, with the shortest stay being 5 days and the longest 6 weeks! I cooked in each place I stayed, (among other odd jobs) and each one was vastly different. Clearly I got along well with the people at the place where I stayed for 6 weeks, I initially went with the intention of staying a week and found that I just couldn’t leave. That was at Sublime Vineyard and Bed & Breakfast. My hosts, Steve and Fenella were absolutely wonderful and I can’t thank them enough for the time that I spent with them, it was certainly one of the highlights of my trip to New Zealand. The photos in today’s post are all from a lunch that Fenella and I catered for a winery tour group. I was fortunate that at Sublime, both Steve and Fenella are great cooks and between the three of us, some truly amazing meals were had, (and given that they have their own vineyard, a lot of amazing wine was consumed too!). That also meant that their kitchen was well stocked and their ingredients were fresh. When we wanted veggies we went out to the garden, when we wanted chicken for dinner Steve simply killed one of the chooks. It was heaven. 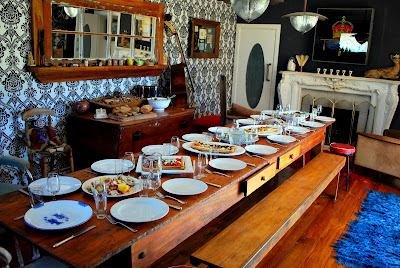 Dining Table Set at Sublime for Catered Lunch
Not all of the places that I Helpxed at were like that. I never had any bad experiences per say, merely interesting ones that generated stories for me to tell later. It was fascinating to go into people’s homes and businesses and to see how they ran things. Shocking would also be another word to describe it. For the most part the people were all very nice but you just know that Gordon Ramsey would have had a field day tearing them apart if he ever saw the state of their kitchens. At one restaurant that shall remain nameless, fresh seemed to be synonymous with frozen and quantity with quality. I suppose this should have come as no surprise after the current Chef revealed that she liked her steak well done… When I was given the initial tour of the kitchen and pantry, the Chef also explained how certain dishes were made. Stock came from a powdered cube. Apple pie filling came from a can. Hors d’oeuvres came from the freezer. Mushroom and leek sauce was made with a can of soup. Bolognese was simply ground beef with a can of spaghetti sauce mixed in. Desserts were made in big batches, frozen and then reheated in the microwave just before being served. Throughout the tour I had to constantly remind myself to smile and nod politely and to keep a look of horror off my face. 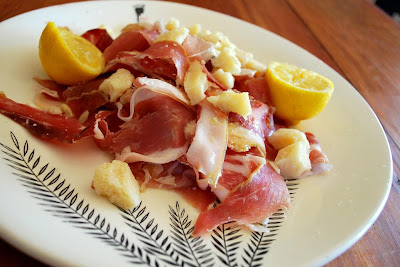 Prosciutto and Parmesan from Italy with Lemon
Aside from the odd practices that I observed in professional kitchens, I also encountered a number of people with unusual eating habits. I met a grown man who didn’t eat vegetables and refused to eat any food that had touched vegetables, (is it any wonder his kids were picky eaters?). I met a woman who was thrilled when I showed her how to make fresh pasta but said her husband was a meat and potatoes kind of guy who proclaimed pasta to be “town tucker” and wasn’t interested in it. I met a man who was completely devoid of a sweet tooth and who I therefore had a difficult time understanding because he refused all of my baked goods. Loving sweets as much as I do, I just couldn’t wrap my head around anyone not having at least one sweet weakness. I met a surprising number of people who had never had pierogies before and I quickly remedied that, (and thus created more work for myself as much to my enjoyment, pierogies were then requested on subsequent occasions). I met even more people who ate dinner in front of the television instead of at the table, (something that never happened in my home growing up). But to end on a high note, I also met an 11 year old who can extol the virtues of fresh pasta and can make it herself from scratch, (I’m sure you can guess who her parents are). 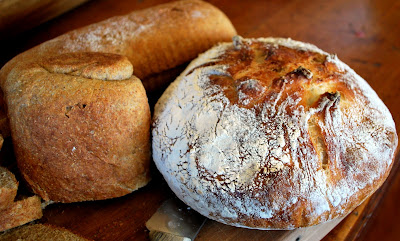 No Knead and Whole Wheat Bread
This post only scratches the surface of my Helpx experiences but as you can see, many of them are ones that I won’t forget and I would encourage anyone who’s looking at trying something new or who wants to truly live in a different culture while traveling to give Helpx a go. You might end up in some odd or unusual situations, but that’s all part of the fun and at the very least you’ll get some material for a blog post out of it. :)

As for anyone who’s looking for an amazing Bed & Breakfast to stay at while in New Zealand, look no further than Sublime. Steve and Fenella live in a beautiful location, overlooking their vineyard and you won’t find better meals anywhere else! I would return there in a heartbeat.
Posted by Brilynn at 6:02 a.m.

what a wonderful, wonderful way to tour a country and meet its people! this is such an amazing organisation, i think i shall do this when i am retired, or when the kids are old enough to fend for themselves for a while!
i bet you had tons of great encounters, not just the ones mentioned (hilarious) and i'll hope i'll be reading some more over the next weeks and months!

I love the sound of Helpx AND WWOOFing! That sounds so cool. What a great way to travel and learn how people actually live.

(I want that pear tart! And the duck fat fried potatoes with pears too, please.)

Hello Brilynn, I really loved this post . Please forgive my unsolicited email. My name is Maggie and I’m a community manager with ShesConnected.com, a dual-profile social networking site that allows women to connect with other women in their professional and personal lives.

Besides building a community for women with shared interests, we also connect brands with digitally connected women like you who enjoy blogging about their passions. Please visit our website (www.shesconnected.com) to learn more, and consider adding yourself to our growing directory of bloggers to promote your blog and meet other great women bloggers.

I’m also reaching out to you on behalf of Food Network Canada. From August 14 for a month, Food Network Canada would like to share the love with fellow foodies and cooking enthusiasts by giving you and your readers a chance to win a $250 William Sonoma Gift Card or 1 of 4 prize packages from foodnetwork.ca!

Please help spread word about the contest by sharing a link to the www.fortheloveofgoodfood.ca contest on your blog and social networks. Just think of all the culinary delights the lucky winner can whip up with their new cooking and baking arsenal! Now splurging on that $170 panini presser doesn’t seem like too much of a guilty treat.

Please don’t hesitate to ask me any questions, thanks!

Are you one of Canada’s top 100 influential digital women?
You could be eligible to attend www.sheisconnected.com conference for free!
She is Connected Conference- Connecting brands and digital women
October 20, 2010 Toronto

Wow... thanks for telling us about Helpx! I knew about WWOOF, and I've considered doing it, but now I'm much more into what I've seen on Helpx.

Wow, what an interesting post to read, I had heard about these types of exchange programs but never knew anyone that did them. Your experiences would definitely have encouraged met to try it in the past when I was in NZ and Australia, about 6-7 years ago.. the country is absolutely beautiful, and like you, I had lots of fun and interesting experiences there. ;) Thanks so much for sharing your experiences with Helpx, really loving your blog!