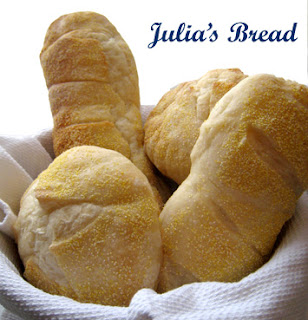 I’m so hardcore, I’ve been a part of the Daring Bakers since before we were called the Daring Bakers. Yet despite this apparent hardcoreness, I had never made the original Daring Baker challenge of pretzels. All that has now changed. You’ll notice that today the blogs are overrun with Julia Child’s French Bread, and mine is too, but I also have DB pretzels. I somehow feel more complete as a person now… or at least as a Daring Baker. 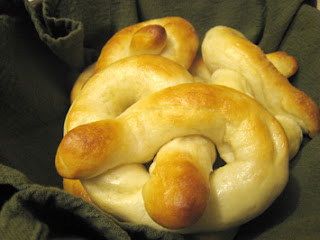 First up, the actual challenge of the month, Julia Child’s million page recipe for French Bread: This bread is time consuming, (just reading the recipe will take up a good chunk of your time) but not hard to make. I’ve been making a lot of bread lately, especially since I received the wonderful Artisan Bread in 5 Minutes a Day and although the Julia Child recipe produced nice bread, I wouldn’t say it was necessarily any better than the uber popular No Knead Bread or any of the rustic loaves I’ve been making from Artisan Bread. That being said, both of the later loaves also take a fraction of the effort and are a lot more convenient to make for the average home baker. They also don’t require kneading, which is a good or bad thing depending on which side of the fence you’re on. Some people find kneading very therapeutic, for others it’s torture. I had no problem kneading to make the Julia Child recipe, but I don’t think I’ll do it again as I’ve fallen in love with speedier ways of making similar bread. That doesn’t mean I’m against kneading, I kinda think it’s fun, but not always necessary. 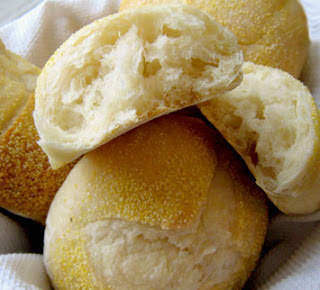 Up second: Hot Buttered Pretzels from the King Arthur Flour Baker’s Companion. This recipe took considerably less time, which was good for my impatient self. I was surprised to see that the pretzels were only dipped in water before being baked as opposed to boiled, but maybe I’m thinking of bagels and thought they would be done the same. I liked these best hot out of the oven and dripping with butter, just how everything should be enjoyed. The only thing missing was a strip of bacon… 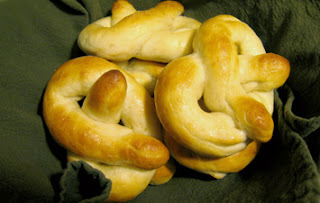 To check out hundreds of other attempts at Julia Child’s French Bread, check out the Daring Bakers blogroll. You’ll get more info from these blogs that you ever knew could possibly exist for one recipe. Thanks to Mary and Sara for hosting this month and choosing another challenging recipe!

It looks fresh and moist and beautiful! Great job (on the pretzels too!!)

Great job on the bread - and catching up on the pretzels! I haven't tried many no-kneads, but this JC recipe has won my heart!

Wow you did double time it this month! Glad you got both of them in, truly Daring!

Oh, goodie -- yours is the first of the DB blogs I've read, and I'm looking forward to reading all about Julia's bread. Love the pretzels, too.

Have you made dumplings for your blog? I craving them and your bread too.
- christine

Hi Brilynn,
They look so beautiful - I really admire all you Daring Bakers!

The breads turned out beautiful for you...well done!

Three things: You're bread is gorgeous! You're a rock star. And you're showing off with the pretzels.... and that's fabulous!

Beautiful job on the challenge this month...and the pretzels!! What should I bring over? :)

Gosh your creation look so fanstastic, so creative. I was totally smack with mine as usual, we boys don't baked bread! lol!

That looks so great, I love just smelling the soft, warm insides before I take a bite :)
I prefer kneading. I'm always looking for ways to burn calories in a fun way :)

kudos to you, Brilynn. There's so many bread actions in your kitchen! Now you really make me want to try my hands at the no knead artisan breads!

You are really hardcore! :-) Well done!

Bread looks gread and wonderful pretzels. I would never be able to catch up as I've just recently joined but I'd love to go through all the previous db recipes!

Way to "go big"! If I tried to catch up on all the challenges I missed, I think I might go a bit crazy... Not only are there a good number of them, but they're terribly intimidating! Kudos to going back and pulling that last one off flawlessly.

Great looking bread- you did a wonderful job. Those are some pretty cute pretzels too!

Two birds with one . . .
Both the bread and pretzels are WOW lovely Bri!

That is some really nice bread! I loved that you also did pretzels.

That crumb you got on the bread is fantastic! You must have been really inspired to do two challenges...those pretzels look pretty darn yummy, too.

Truly professional looking bread Brilynn! Just beautiful!
An I love that you've gone back an made the pretzels.
x x x

I hope you either gave some away, or have a very high threshold for bread-based products. :) Fab job!

It looks really good - soft inside while remaining crisp on the outside, very nice!

Good for you for getting in both the challenges this month! Your pretzels look great (I loved them, too.) and your bread looks fab!

You over achiever you! Both look lovely - the french bread and the pretzel. But I agree , I love the no-knead bread better.

That is some display Brilynn! I can't imagine trying out that "million page" recipe but the pretzels "dripping with butter" sound wonderful!

I tagged you for a meme, hope you don't mind!
http://andthenidothedishes.blogspot.com/2008/02/meme-and-nice-bowl-of-soup.html

Your loaves and pretzels are so gorgeous! I'm jealous :)

I just want to sink my teeth into your warm fresh bread.

Love the new header and look.

Both turned out great!
I've been wanting to try the popular no-knead breads but I can't decide which book to buy. After your post I want to try them even more!

Those boules look PERFECT! So pretty! And your crumb is amazing. It was interesting doing this challenge -- they are always an experience, but I do agree that there are lots of good ways to make bread. I'll have to check out that book. Now on to the next challenge...

being a pretzel person myself, I just LOVE your pretzel pics! And of course, the rest of your bread looks lovely as well...cheers! )

I think you could have wedged some bacon in the holes in the pretzels.

Can't believe you made both challenge, double kudos for you. They both are great.

Well done on both and yes hardcore it is. But then we DBs have a little nuttiness to us. Great job on the bread Bril, Why don't you come over with a few of those pretzels and I'll provide the cheese!!!

At first I thought you made pretzels with the French bread dough!!

Your bread looks wonderful. The insides look like how I wish mine would have turned out...

Your bread looks awesome. Good job. And I'm sure you feel much better now that you're a fully rounded Daring Baker.

your bread looks just great! And I"m so impressed you did two challenges. Take a bow!

Double Dare and great execution!
(Compairing no knead to french? Ouch! No way!)

A two-fer. Great bread and gorgeous pretzels...even without the bacon :)
Going to have to try that No Knead Bread soon...it does have its alure.

Oh yeah! The bread is gorgeous and aren't the pretzels fabulous. Now all you have to do is get the DB tattoo and you're officially a DBer ...

Great job with the bread, Brilynn. I agree with you. I like the Artisan bread recipes better. I'm into instant gratification. Also, I don't like my food to be more tempermental than I am!

By the way, I found some kumquats today. They're really good, but nothing like loquats. ;)

You baked bread and pretzels? You're a baking machine! My arms wanted to fall off after the bread. You did a great job on your bread!

Your bread looks lovely and light and fluffy. You did a great job.

The pictures let me bite into the screen! Great job"
Ulrike from Küchenlatein

Brilynn, you had me with the pretzels! Double challenge means double congratulations. Well done!

you bread looks so soft! wow!

What? No bacon wrapped pretzels? That is just so wrong!
Lovely bread, warm and fresh from the oven!

Great job on this challenge, and nice lookin' pretzels too! - Candace

Wow. Those look fantastic!
Can i make myself a sandwich?
:-)

I am the 62nd comment to congratulate you on "rising" to the challenge Brilynn. Your loaves are a thing of beauty!! I had to sneak one of my baguettes straight from the oven and slather it with butter :D

Deary me, your bread is making me want to faint with pleasure! I could get lost in those knots of billowy carbohydratiness and never look back.

I think I'm the only one that's not a DB.
Congrats on being one of the first.

I love pretzels. Especially greasy ones from Auntie Annes.

A lot of bread I can see:-) Everything looks so great:-) I used to bake my own french baguettes some time ago when I was living in Denmark and any bread from the baker's was simply inedible. Although all that baking was time and effort consuming the final result was really worth it.

Hi Brilynn! Great looking bread - and congrats on doing ALL the posts now - I still want to go back and do the croissants!

When I was little, my mum had no idea what pretzels really were...she thought they were dog biscuits...I had to educate her about that a few years ago...

Ah crap, now I have to make the pretzels...the only challenge I didn't do either. I must now step up.
Both your breads look great.

Looks great! I love that pretzel recipe - the DB's did that before I became a member, but I went back and made them, and was glad I did!

When you say you have found quicker ways of making bread, want to share any?

the texture of your rolls look really light and soft!! wow!! your pretzels look great too!!

Two challenges in one, well done!

You did a great job, all your pictures are great, but the one with the breads interior is so delicious looking!

Your loaves look fabulous! The texture and crumb is so light and airy. I love the pretzels too, but could I have mine with that touch of bacon you mentioned?

I'd like to check out that book, I'm adding it to my list. Thanks for sharing your fantastic bread with us.

Wow! Your kitchen was the place to be with all that amazing bread!

Sometimes I feel like I won't really be Daring Baker until I try to make the croissant recipe that you and the others did the month before I joined. Nice job on your French bread!

Looks great! I think the bread looks really tender...much better than mine!

Your bread looks great Brilynn! This was a long process and I don't know how often I'd have the time to make it...I gave myself a big pat on the back when I was done :)

I must get that artisan bread in 5 minutes book!

Brilynn how did you get the crumb so fluffy! Great job girl! The DB pretzels are still on my to do list. :)

those pretzels are wow!! i can almost smell them:)

Yay for the pretzels! I liked them fresh out of the oven too - and you couldn't be more spot on.. warm, buttery pretzels wrapped in bacon. Amen.