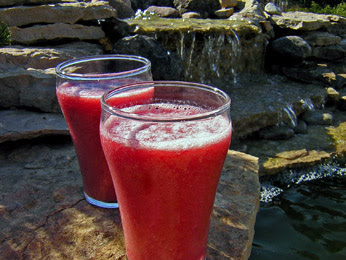 A while ago I was contacted by the folks at TrueBlue who asked me if I would be interested in trying some of their juice. I accepted their offer, (who doesn’t like free stuff?) saying that I would be happy to try some but that I would also be giving honest feedback and wouldn’t hesitate to say if I didn’t like something. A couple weeks later I received a bottle each of TrueBlue Blueberry juice, Blueberry-Pomegranante and Blueberry-Blackberry. Blueberries have been getting a lot of hype in the recent years for being rich in anti-oxidants. As far as I’m concerned, the anti-oxidants are merely a bonus, blueberries taste amazing and that’s reason enough to eat them for me.

I tried each of the juices, chilled, on their own and decided that the blueberry-blackberry was definitely my favourite. I thought the plain blueberry was somewhat dry and didn’t enjoy drinking it on its own as much as the other two. The blueberry-pomegranate was also good, but the blackberry was the winner as far as I’m concerned. 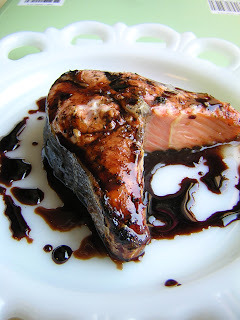 In general I don’t drink very much juice on its own, but I like mixing it with other things. I had lots of fun playing with these juices. The simplest drink was made by mixing any of the flavours with 7Up or another carbonated drink like soda water, add some ice to your glass and you’ve got a great summer drink. I also started adding TrueBlue to my smoothies, which I probably make at least every other day. There are always bananas on my counter that are ready to be mixed with some frozen fruit, yogurt, juice or milk and blended into oblivion by my beloved K-Tec. The smoothie you see here is a combo of TrueBlue bluberry juice, banana and strawberries. You can mix and match fruit here as much as you want and I don’t think failure is possible. I liked experimenting with adding the juice to savory dishes as well and found it worked very well when reduced with balsamic vinegar and drizzled over grilled salmon, (pictured here). Vinaigrettes for salads are another possibility.

So what’s the bottom line? I liked using the TrueBlue juices in drinks, there’s an endless number of ways they can be added to make drinks, alcoholic or otherwise. They would probably be pretty good frozen in an ice cube tray and then dropped into drinks to keep them cool without watering them down. I think a blueberry daiquiri could be interesting... I could see myself buying TrueBlue again to make summer drinks and there are 3 flavours that I didn’t get to try: Blueberry-Cranberry, Blueberry-Iced Green Tea and Blueberry-Raspberry so I wouldn’t mind seeing what they’re like too, the green tea mixture sounds particularly intriguing.

I really like the sauce idea, it sounds brilliant!

I'm curious about the rise of pomegranate everything in North America. I remember my grandfather had a tree when I was a kid and out of all his trees, this was the fruit I liked the least (and it was the most likely to be picked by birds). Now though they sell really expensive and pomegranate juice is showing up in a lot of things...i still can't get over the tartness though.

Hi Brilynn, what an interesting blog, and I love your grilled salmon. Looks soooo delicious.
Blueberry-pomegranate is new for me. Blueberry-Iced Green Tea can be delicious, because I am enjoining Ume-Green Tea liquor and Strawberry-Green Tea liquor.

I like the idea of reducing the juice with the balsamic. That salmon dish looks delicious!

Isn't this one of those juices that they mix with apple or grape or something and make it seem like it is pure (true) blueberry or whatever the combo is....

The sauce on the salmon does look great. I don't know if "real" pure juice is available in your area but I suggest it over this stuff with added sugar,etc.

Bri, I love hearing what you have to say about products and books and recipes - I know you'll be honest.

I like the idea of using it with fish!

Great and honest review. THe blueberry-blackberry would make a great granita or sorbet!

Vinaigrettes for salad is a combo that comes to my mind but reduced to use as a sauce is a real stunner!

They all sound good, we have a different brand here, but I've been meaning to try them for ages...

I was supposed to try TrueBlue too! But it got lost in the mail! How funny.

Bri!! You know I love you. I knew your creativity would make for an amazing page, but you have outdone yourself. I am gald to call you my best friend, and am so glad that you are doing something you love. The recipes are great! Nice work!!!
Tara