The West Side Beef Co. Story

It all started because Kurt Krumme was hungry. He was hungry for traditionally raised, high quality, affordable beef and it was surprisingly hard to find in Toronto. After his search yielded little in the way of results, he got some friends together, contacted a butcher and ordered a whole side of beef to divide amongst the group. What he ended up with was mislabeled beef, poor butchery and a large bill. Kurt believed beef should not be this confusing or difficult.

“I’d been doing some reading about where food comes from and I didn’t really like the answers. So I actually tried to order an entire side of beef.”
-Kurt Krumme

Shortly after this experience, Kurt ran into an old friend of his, Ryan Donovan, and relayed his tale of woe. Ryan responded immediately by saying he was now a butcher, he knew farmers and he could make this work. And he did.

Ryan got a side of beef from farmer Dennis Harrison at Dingo Farms. He butchered it himself, got in his car and drove it over to Kurt’s house where he was hosting a barbecue. Everyone was so impressed with the quality of the beef that they demanded Kurt and Ryan get them more. When other friends found out about it, they wanted some too. It soon became evident that there was a hole in the market that needed to be filled.

“It seemed like a good idea, you know? It was good for the farmer, if we buy another side of beef off the farmer he’s really happy.”
-Ryan Donovan

A business partnership was thus formed and West Side Beef Co. has been quietly growing ever since.  From humble beginnings, Kurt and Ryan now have over 500 subscribers to their program and bring beef into the city every few weeks. The side of beef is hand delivered by Dennis, to Cowbell restaurant which has space for butchery. Ryan breaks up the beef and Kurt helps with vacuum packing and labeling. It is then divided into 20lbs boxes which they sell for $8 per pound. West Side Beef Co. doesn’t deliver yet, so customers come by the restaurant to pick up their goods. This gives Kurt and Ryan a chance to meet their customers and chat about the contents of the box which could include some unusual cuts of beef as well as sausages and stock.

Over the past two years, without much effort on their part and primarily through word of mouth, their business has continued to expand. As they grow, they’ve also gotten help from their friends. Chef Carl Heinrich, (currently participating in Season 2 of Top Chef Canada) has been lending a hand to help Ryan with the butchery. As both a chef and a customer of West Side Beef Co., Carl appreciates the value of high quality beef and really believes it makes a difference when it comes to creating memorable meals. 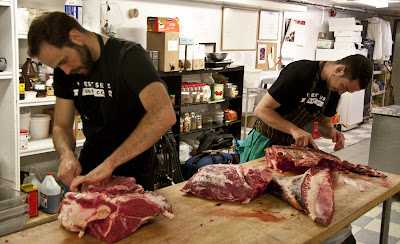 “The difference between West Side Beef and the beef you get in a grocery store, the biggest difference would be that when you buy West Side Beef and you come and you pick it up, I can tell you exactly where the cow is from and exactly who the farmer is and probably even exactly what the cow ate, exactly when he was killed, exactly how old he was, it answers all of those questions. And then there’s just the quality of the beef itself.”
-Carl Heinrich

Together, they’re helping Torontonians eat better by providing the option of purchasing sustainable, healthy beef at an affordable price. West Side Beef Co. is also a proud supporter of local farmers who make all of it possible.

So where do they go from here? As Kurt put it, in the long term they want to change the way people eat. They’re starting with beef, but that’s only the beginning.

For those who like everything in infographic form, this is how it works: