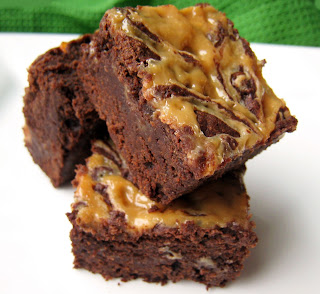 There seems to be a “day” for everything.  Today was World Nutella Day, January 23rd was National Pie Day, April 14th is National Pecan Day, May is apparently is a whole month devoted to Chocolate Custard, September 17th is National Apple Dumpling Day and December 7th is National Cotton Candy Day.  I don’t exactly know who makes up these so-called National and World Days, but I feel like I need to add one to the mix- World Dulce De Leche Day.  I will concede that Nutella is pretty amazing, but Dulce de Leche is equally so and it deserves a day in the spotlight too.  How about arbitrarily making February 28th,World Dulce de Leche Day?  Why not?  Who wouldn’t want a day devoted to sweet, gooey, decadent dulce de leche?  Food bloggers have got quite a lot of influence around the interwebs, so spread the word, there’s a new holiday in town and it’s delicious!

For any of you out there who may not be familiar with dulce de leche, (what rock have you been living under?) it’s a thick, caramel-esque spread which is Latin American in origin and whose name is literally translated as “sweets made of milk”.  Dulce de leche is essentially sweetened milk that has been cooked to the point of caramelization but how this is achieved, varies. 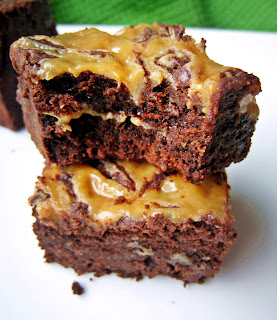 One way to make dulce de leche is by boiling a can of sweetened condensed milk, in the can, fully submerged in water in a pan on the stove top.  If that sounds scary, it should.  If you’re not careful, there’s a possibility that the can could explode.  The thought of boiling hot dulce de leche being flung all over my kitchen in a single bang does not appeal to me.  That’s why I’ve adopted David Lebovitz’s much safer method of pouring a can of sweetened condensed milk into a pie plate, covering it with tinfoil and baking it in a water bath at 425F for about an hour to an hour an a half, until it darkens.  Same great results, minus the explosion potential.  Win-win.

I’m going to get the February 28th Dulce de Leche Day festivities started early with, (another) David Lebovitz recipe, this one for Dulce de Leche Brownies.  I already love brownies so when you add swirls of dulce de leche, it pretty much puts them over the top.  And it’s easy to do too!  Now then, on to official business, if you’d like to participate in World Dulce de Leche Day, simply make an awesome sweet treat using dulce de leche, take a photo and post about it to your blog on February 28th!  Send me the link and your info to brilynnf @ yahoo dot ca and I’ll do a round up of all the awesomeness!  If you don’t have a blog, that’s cool, just send me a pic and a line about you and your recipe and I’ll post that too.  Spread the word!  There’s no reason World Dulce de Leche Day can’t become as successful as World Nutella Day, (or why the two shouldn’t be combined for ultimate world domination). 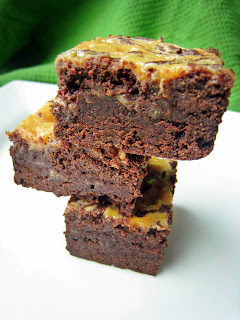 Preheat the oven to 350 degrees (175 C).
Line a 8-inch (20 cm) square pan with a long sheet of aluminum foil that covers the bottom and reaches up the sides. If it doesn’t reach all the way up and over all four sides, cross another sheet of foil over it, making a large cross with edges that overhang the sides. Grease the bottom and sides of the foil with a bit of butter or non-stick spray.
Melt the butter in a medium saucepan. Add the chocolate pieces and stir constantly over very low heat until the chocolate is melted. Remove from heat and whisk in the cocoa powder until smooth. Add in the eggs one at a time, then stir in the sugar, vanilla, then the flour. Mix in the nuts, if using.
Scrape half of the batter into the prepared pan. Here comes the fun part.
Drop one-third of the Dulce de Leche, evenly spaced, over the brownie batter, then drag a knife through to swirl it slightly. Spread the remaining brownie batter over, then drop spoonfuls of the remaining Dulce de Leche in dollops over the top of the brownie batter. Use a knife to swirl the Dulce de Leche slightly.
Bake for 35 to 45 minutes. The brownies are done when the center feels just-slightly firm. Remove from the oven and cool completely.
Storage:These brownies actually become better the second day, and will keep well for up to 3 days.
Posted by Brilynn at 8:13 p.m.

Those brownies are an absolute delight to look at. These must have been heaven to eat. I have a sweet treat linky party going on at my blog right now called "Sweets for a Saturday" and I'd like to invite you to stop by and link your brownies up. http://sweet-as-sugar-cookies.blogspot.com

June 21st is Dulce de Leche day in Argentina. Make sure to jot it down on your calendar and celebrate in style!

These look delicious! I love dulce de leche and would eagerly participate in a day devoted to its deliciousness!

That looks SO GOOD!

What a delicious recipe. I've made it twice in the last few days, but ran out of dulce de leche, so instead I used condensed milk which I boiled in the can. Gave a really great result too!

Why not indeed! I agree dulce de leche is sublime and we should dedicate a day to it as well :)

The brownies looked so nice and amazing! I definitely love it. Thanks a lot for sharing the recipe.

I've never made dulce de leche before as the boiling the can always scared me too much. Thanks for posting a much easier (and safer) way to do it. I would love one of your gorgeous brownies right now with a big glass of ice cold milk. Yum!

I didn't know there was a World Dulce de Leche day, but it seems right that it should be so!
Those brownies look divine and are calling to me - and I have no intention of resisting!

Those brownies are an absolute delight to look at , They look so delicious.

Actually, October 11th is the "world Dulce de Leche day". In fact, for us, Argentineans, every day is the Dulce de leche day! Check this out!
http://elclubdeldulce.com/eventos-y-promos/existe-el-dia-mundial-del-dulce-de-leche