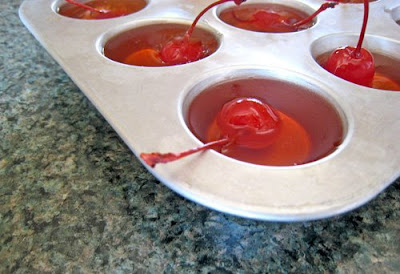 Last week I invited the work crew to come over after service for a little bonding time outside of the kitchen. I considered making some snacks for the evening, but cooking for cooks is not the most relaxing thing ever. Especially not when they’re making stuff like this and demand for there to be a winner when cook offs take place. I decided a much better option would be to stock the fridge with beer. It’s less stressful for me but still keeps everyone happy. Buying beer is boring though and I like to make things. So how could I make something but not have to worry too much about being judged? Make sure that whatever I made was full of booze and I had just the recipe. One of my favourite, (and free!) food magazines is Food and Drink which is put out by the LCBO, (Liquor Control Board of Ontario). Sure, it’s just a giant advertisement for the liquor store, but all food magazines are full of ads and at least this one pairs food with alcohol and has some pretty solid recipes to boot. Anyways, in one of the recent issues there was a section on cocktails that had been turned into jellies that caught my eye. Basically, they’re a more sophisticated version of jello shooters. Instead of neon coloured jello shooters spiked with so much vodka they barely set and served out of Dixie cups at high school parties, these alcoholic jellies are borderline classy. The photos in Food and Drink are gorgeous and the recipes include Cucumber Rose Gin and Tonics, White Russian Bars, Cosmopolitan Meltaways, Sangria Bites and Manhattan Drops. I made the Manhattan Drops and the biggest complaint I received was that I didn’t make enough of them. Apparently a kitchen crew gathering isn’t so far off from a high school party afterall… 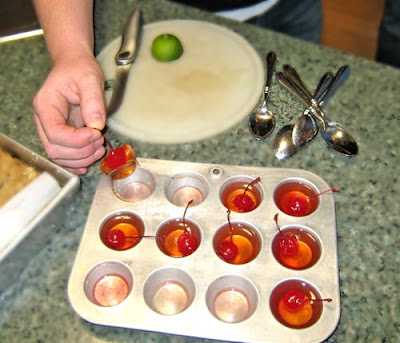 Drain cherries well and blot on paper towel. Menawhile, pour the simple syrup into a small saucepan. Sprinkle gelatin overtop and stir to combine. Let stand until gelatin softens, about 2 minutes. Place this mixture over low heat and stir, gently splashing around the sides of the pan until all of the gelatin has dissolved. Do not boil.

Combine whisky, vermouth and bitters in a bowl. Stir in gelatin mixture. Stir slowly for 1 minute.

To unmold, dip bottoms of moulds briefly in body temperature water. Use a rubber spatula to lift jellies out of moulds.

***Note- I didn’t use Bitters, but did add a little splash of the marschino cherry liquid. I also set mine in a mini muffin tin and surprisingly didn’t have trouble getting them out after dipping the bottom briefly in warm water.

Oh, so pretty! I'd love to sample all of the ones you mentioned. A few times, hehehe.

The new place is teeming with drunken friends? That's a major step over the old one with crazyneighbor! Hee hee :)

Yes, wow this sounds like so much more fun and more better than the crazy guy neighbor.
Was there one for martini, that my guy would love.

Hi-
Stumble led me here- these sound great. I was wondering if you could share the other recipes as well for those of us that can't get copies of Food&Drink?

They really were kind of amazing.

You are so smart! I bet this was a huge hit with all.

That's an adorable idea! They sound really tasty, too.

Ha ha ha! I remember making jello shots back in high school. Neon and barely set from all the booze in them, so disgusting.
These are beautiful... I'd love to try them out as I have been mildly obsessed with grown-up jellos for the last little while. If it's liquid, I've probably gelled it- it's a variation of the "what can we deep fry" game. My most recent favorite is bing cherry juice, followed closely by muscato, and a sherry jelly that's set with agar...

Oooh! These are awesome! I am so making these for my next party, what a great idea! Even though I'm many years out of college, I still love jello shooters, even in the paper cups. :)