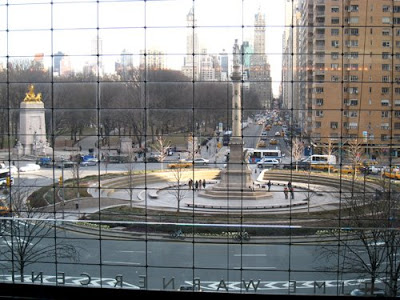 While many people flock to for the galleries, theatre and shopping it should come as no surprise that I was most interested in the food and restaurants. In my last post I hinted at some of the spots I had visited but they really deserve to be mentioned all on their own so without further ado, I give you Bouchon Bakery, Bar Boulud and Café Boulud.

Bouchon Bakery Café is located on the third floor of the Time Warner building and offers a wonderful view of and . When I arrived around the place was packed but as a solo diner I managed to grab a seat at the bar. As I perused the menu another single diner was seated beside me. The bartender offered him a menu but he waived it away, saying he’d have the chicken soup and a glass of white. He clearly ate here often and knew what he wanted so I closed my menu and said I’d have the same. It was a good choice. This was not your ordinary, out of a can chicken soup, this was Thomas Keller Chicken Soup and what all chicken soups should strive to be. 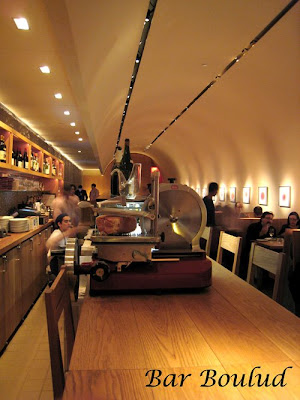 The chicken is braised and tender and is nestled into a rich, flavourful broth that it shares with a mirepoix and ricotta dumplings. All meals are served with an epi baguette, (classic Parisian baguette, shaped to resemble a wheat stalk) which was perfect to sop up the broth from the bottom of my bowl of soup. To finish off my lunch it seemed appropriate to order the dessert that shares its name with the bakery so I had the Chocolate Bouchon which was served with a dusting of icing sugar and a scoop of heavenly cherry ice cream. Yes, heavenly. The bouchon were chocolaty and everything that they were supposed to be but it’s the ice cream that I’m left craving more of. All in all, a delightful way to kick off my Thomas Keller experience which will soon include The French Laundry… 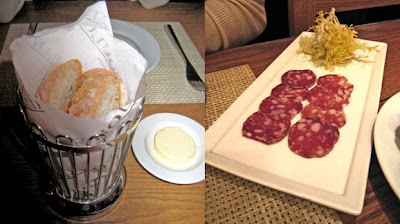 Bar Boulud is Daniel Boulud’s more casual bistro. The space is long and narrow with vaulted ceilings and is cozy with an almost tunnel-like feel. In an attempt to save my wallet from too much damage, (it was only my second night in ) I opted for wine and appetizers instead of a full meal although after seeing the dessert menu I decided I should at least sample it as well. I knew before entering Bar Boulud that I wanted to try their pâté, the issue then became deciding which one. I finally settled on the Pâté Grand-Père which was a coarse country pâté with foie gras, truffle juice and port. I also tried the Saucisson Sec and was happy with it as well, to the point that I want to make my own. For dessert I had the Marron et Cassis which consisted of a chestnut mousse, meringue, blackcurrant gelée, cassis and crème frâiche. I wish the picture could translate how good the dessert really was but it doesn’t do it justice.

Service at Bar Boulud was on point and accommodating to my every whim, even when I made silly requests like asking to keep my menu and to see the kitchen. Our server was surprised at my desire to see the kitchen, it wasn’t something she’d been asked before but said she would ask the Chef if it was ok. Shortly thereafter I was escorted downstairs by one of the cutest cooks I’ve ever seen, (That’s him crouched behind the counter in the Bar Boulud photo. Note to Chef- Please steal him away from Bar Boulud and hire him… Thanks.) who showed me around the kitchen and introduced me to the Chef who was busy expediting. As we made our way back up to the dining room the Cutie Cook asked how if I had enjoyed my meal and upon hearing that I had the pâté, proceeded to win me over completely, (not that he had to try very hard) by telling me I had to try their newest pâté, made of venison, as it was his favourite. I was tempted to return the following night but with so many other places to try in such a short time, it just wasn’t possible. 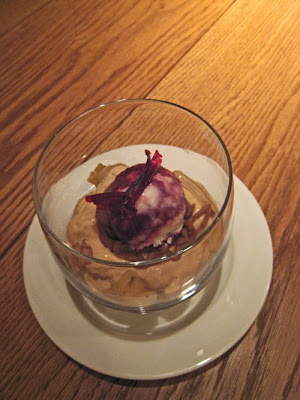 Café Boulud was my next stop, (I also have the cookbook of the same name) and I was in luck as there happened to be a prix fixe lunch special going on which made my meal there both elegant and affordable. The prix fixe was three courses which also featured an amuse bouche to start the meal and madeleines to finish, in addition to the appetizer, entrée and dessert. The amuse was a goat cheese ball, rolled in parsley and resting on a spoon with tart preserves. For my appetizer I chose the smoked salmon on puff pastry with caramelized onions, bacon lardons and frisée.

I overheard the couple beside me discussing their meal and one of them declared the salmon appetizer the best part because according to him, ‘caramelized onions are even better than caramelized… caramel.’ Next up I had the skate for my entrée, it was accompanied by fingerling potatoes, cauliflower, olives and capers. And for dessert, chocolate tart with mocha ice cream. The lemon scented madeleines, sugar dusted and still warm from the oven were brought out just before the bill and though I didn’t need to eat anything else I couldn’t resist popping one after another into my mouth. Once again, I had a fabulous meal that left me walking on a cloud as I drifted back out onto streets. 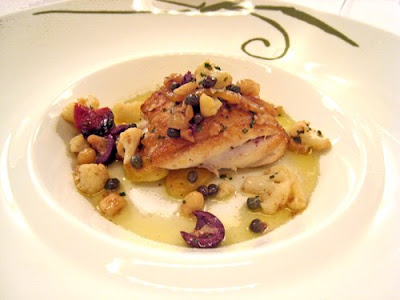 If my pockets were deeper and I had the time I would have loved to try out Daniel Boulud’s other two establishments, Daniel and DB Bistro Moderne but I suppose that’s something to look forward to for next time, along with Thomas Keller’s Per Se… I might as well dream big if I’m dreaming at all.

I haven't been to Bar Bolud yet - so glad to hear it's as good as I expected. I just love Daniel's restaurants. I met him recently when he and husband did a charity lunch together. He's a nice guy, too!

(You can read a bit about the charity event here if you like: http://danamccauley.wordpress.com/2008/10/27/hanging-out-with-the-grand-crew-at-grand-cru )

I really am delighted you got to visit, eat and enjoy all these but damn I wish I could too! Thanks for this write up you lucky girl.

That looks like a whole lot of good eating. I wish I had more time and planned better when I was in NYC because that all sounds incredible

Wow...I really have to start doing some research on where I want to eat when I'm down there in April! I'm thinking of trying to get a reservation at WD-50. I'm odd.

I'm so jealous. I went to the Bouchon Bakery, but just to pick up some pastries. LOVE the Thomas Keller Oreos!!

you are a girl after my own heart. 80% of the reason we travel is for the food. we've wanted to try keller's places here but $$ is always an issue. we were SO friggin lucky to get into the French Laundry over the summer and had an excellent experience. if you're interested, you can hear our podcast about it - http://www.weareneverfull.com/the-french-laundry-a-240-per-person-night-of-extravagance/

or just check out the pix if our voices drone on and on andyou can't take it anymore!

Wow, your trip looks like it was delicious! Bouchon is our favorite restaurant here in Las Vegas.

It does sound and look like an awesome trip. Thanks for sharing and making us all drool.