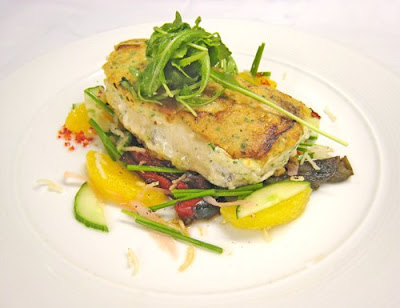 In my ongoing Chef Challenge series, whereby I bring an ingredient into work and get Chef to create something with it, I recently discovered that I don’t even need to bring in an ingredient. All I need to say is “Make me something amazing,” and Chef will figure it out. Or at least that’s what happened one day when I didn’t have anything with me but still wanted to see what Chef would make up on the spot. There was some halibut in the fridge so I suggested he might want to make something with that. He responded by telling me that halibut was boring. I told him that was all the more reason for him to turn it into something amazing. It wasn’t long before he got an idea and put me to work gathering ingredients.

The resulting dish was a Spanish style fish, (that was first marinated using Asian inspired ingredients, including green tea and lemongrass) served with a citrus and chive salad, on a bed of roasted red and green peppers and garnished with deep fried rice. One of the primary things I took away from this dish was a new way to prepare fish. And just so Chef knows that I’m actually absorbing the information he’s throwing at me, I thought I’d do a remake of his halibut dish, using the same technique for the fish but changing up the sides.

While Chef was making his version he gave me a number of ideas about other sides, sauces and toppings the fish could be served with. He also mentioned that it could be done with any firm fleshed white fish, not just halibut. My version turned into an amalgamation of his suggestions and what I had in my kitchen, resulting in saffron rice and peppers with Spanish style cod, topped with sautéed spinach with chilis and garlic. 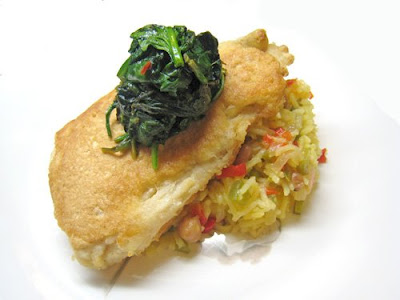 Most importantly though, the fish technique actually worked for me! If I were the type, I almost would have squealed. It’s not that making the fish was difficult, but the batter is messy and I’m still not overly confident in my ability to cook proteins. In spite of that, the cod turned out almost exactly as I thought it should. The crust was light and crispy and the interior remained moist. Nice one!

Of course I can never be entirely satisfied with a dish that I make, so my problem with this one was that it lacked a sauce. As soon as I plated it I realized I should have made a spicy tomato based sauce, (which was one of Chef’s suggestions when he was telling me other ways to serve the fish) to add colour, flavour and balance to the dish. It tasted fine without it, but would have been improved with it.

Here’s a basic method for making this fish at home:

Prepare the batter by whipping egg whites and a pinch of salt to stiff peaks, (I used approximately one egg white per serving of fish). Add some herbs if you’d like and a little flour to give the egg whites some stability, (they should still be fluffy and getting it onto the fish will be a messy affair). When your batter is ready, heat some oil in a frying pan and take any firm fleshed white fish and dredge it in flour. Then, carefully coat the fish with the batter and lay it into the frying pan. When one side has browned and the outside is crispy, flip it over to achieve the same effect on the other side. I found that my fish was done as soon as both sides were browned, but if you have an especially thick cut you could transfer the fish from the frying pan to the oven to finish it off.

I am a bit fearful of cooking proteins myself, but this is very inspiring ... and I do love fish! Thank you for the technique, I will try it.

I love these posts. It sounds like an awesome and tasty learning experience for you and I'm sure it's a lot of fun for the Chef, as well.

Very worthwhile data, thank you for your article.
play games