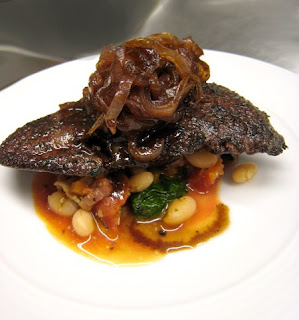 As I’ve mentioned before, Dad likes to hunt. Fortunately for him, (and me too) he doesn’t have to go far to find what he’s looking for. Our backyard supplies us with partridge, wild turkey and deer. Lately we’ve been watching the deer wander through our yard and trample down the snow beneath the apple trees as they search for remnants of Fall. However, deer watching can only go on for so long before one of them becomes dinner. And so, last week on a clear and sunny morning after a fresh snowfall, a young buck encountered more than he bargained for while searching for apples. After hitting the deer with his bow, Dad called me out to help him gut and hang it. As we crouched in the snow and Dad removed the insides we wondered what could be done with them. When in doubt, take it to someone who knows. Take it to a Chef. 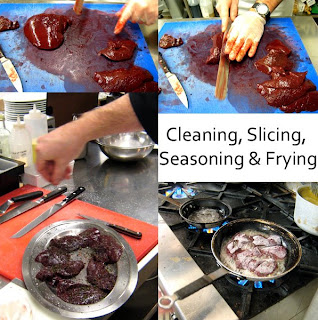 I suppose at this point I should probably let you know that I’ve been working at a restaurant for the past 3 months so finding a Chef to bring venison heart and liver to wasn’t a problem. I simply packed them up and brought them into work with me, so fresh they were still steaming. Chef claimed the heart for himself but said he would make staff meal out of the liver. Before he could do so, the liver first soaked overnight in milk with a few bay leaves and juniper berries thrown in. The following day Chef had me remove the liver from the milk and attempt to clean it. After I struggled away with bloodied hands for more time than I'd like to admit, trying to remove the outer layer of skin, Chef took over and cleaned the rest. This was quite the production, garnering the interest of dishwashers, wait staff and patrons alike, (as it’s an open kitchen). 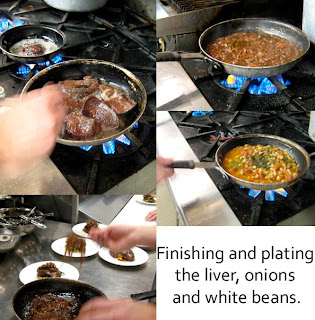 Once the liver was cleaned it was sliced, seasoned, dredged lightly in flour and immediately pan fried in duck fat and butter. Because really, if duck fat is available, why bother using anything else? Chef decided to plate the liver with some of the cassoulet beans, (that are usually served with duck confit) and onions. Liver and onions are traditionally paired together so that should come as no surprise, however when Chef added Kahlua to his pan of onions that was enough to elicit a raised eyebrow from me. Along with the Kahlua, he added butter, garlic, fresh herbs, bay leaves, red wine and maple syrup and this was reduced until it reached the consistency seen in the top photo. So how did it taste when it all came together? Well, one of the dishwashers who initially declared that liver was disgusting and refused to eat it, cleaned his plate and was left wanting more. It was really good.

No thanks but my dad would love you a thousand times over, my mother wont make it for him.

I actually like liver and onions and am mighty jealous you had such a fancy plate of it!

That looks awesome! I'm a big liver fan from way back,(and have had to bear the scorn of most around me). I've never had venison liver, but it looks so good, I can't imagine not loving it.

I'm pretty blech to lukewarm about liver (except when it's turned to gravy-- yum--) but this is really intriguing (esp. since you said someone was converted by it)!

I love liver! It must be delicious with onions!

Childhood memories of anemia paired with onions.. but that sauce.. maybe I could be converted.

i haven't had liver since i was a kid, but i would definitely try it out...especially fried in duck fat.

I'm sorry, but all I can say is euwww. Liver and onions tops my all time worst ever food list. I'd take the onions, but the liver....euwww.

yummy what a nice presentation . wish i could taste this :)

Oooooh, venison liver! Lucky you! (...although I don't envy you having to clean it. I bet that was just a bit grizzly)

How does venison liver compare to beef liver? Does it have a wilder flavour?

what i want to know is how does venison liver compare to chicken liver or veal liver (which i think taste completely different from each other). i love, love liver (we just did a really delish veal liver dish w/ mushrooms recently) and have never tasted venison liver. it looks much more dark red than chicken or veal liver... mmmm.

I've always liked liver and onions when cooked properly. As for venison liver, even though I ate venison on a regular basis when I lived out in the boonies growing up in Oregon, I don't remember my grandparents ever cooking the innards...of course they may have served it to me without telling me what it was (as they did with the venison).

Wahh.. nice idea. Liver with onion is very tasty item, i like this food very much.