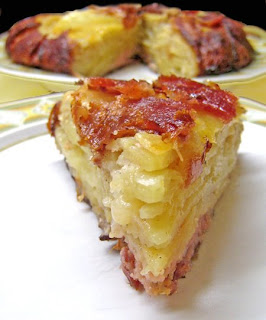 Michael Smith, Chef at Home, knows how to make some seriously tasty food. This is the same man that inspired me to make such dishes as Buffalo Chicken Wing Salad (which I need to make again soon, it’s awesome) and Lobster Mac and Cheese, (which I have made on my own and also by using his fantastically indulgent recipe). He simply makes great things. I’ve been a fan of Michael Smith’s for a long time and I have two of his cookbooks which I adore but when he suggested wrapping a potato tart in bacon I knew that we would be friends for life.

What’s that? Bacon? I know, it's been a while since my beloved bacon has appeared here. I had become so accustomed to eating homemade bacon, (thanks to Michael Ruhlman, Michael seems to be a good name) that I couldn’t bear to eat any other kind and have therefore been missing out on bacon almost altogether. Since moving out I haven’t made any of my own bacon, cause it’s just not the same without the smoker, or quite frankly, without my Dad so I’ve been going through bacon withdrawal. Luckily there’s a cure for bacon withdrawal though and that’s lots and lots of bacon. 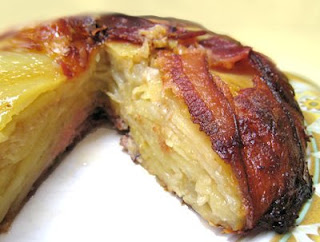 From the very first time I saw Michael Smith make this Potato Bacon Cheddar Tart I knew that I had to try it myself but for some reason it didn’t happen right away. The recipe stayed on my brain though, (Dad’s too) and every now and then we’d mention that Potato Bacon Tart we’d seen and inevitably how we should really make it soon. It was almost as though we were reminiscing about something we’d never even tasted. I think we saw Michael Smith make that tart in reruns two more times before we finally made it into the kitchen to try it ourselves. Why we waited that long, I have no idea, but no bacon lover should have to go through life even a minute longer without experiencing this. Because as you should all know by now, everything is better with bacon.

Preheat oven to 325 degrees.
Line a 6-inch non-stick fry pan with bacon slices, arranging them in a radial pattern and starting with one end of bacon in the centre of the pan and the other end draped over the edge. When the entire surface of the pan has been covered, sprinkle with pepper and add a layer of sliced potatoes to cover the bottom. Sprinkle with grated cheese and pepper and repeat layers until they are slightly above the top of the pan.
Fold the bacon, one slice at a time up and over the potato mound toward the centre. Carefully overlap each slice and repeat until the top is completely and neatly covered with bacon. Press down and cover with a lid.
Place tart on a baking sheet, which will catch any drips during cooking. Bake for 3 hours.
*** I also added some thinly sliced onions and smoky paprika to the layering process.
Posted by Brilynn at 12:37 a.m.

This has to be the ultimate way to eat potatoes! Looks soooo delicious!

Wow - I've been wanting potatoes lately, and combining them with bacon makes this one dish I can't pass up!

OMG I think you may have just made heaven in a dish!

Wow, that is quite the dish! I hope it solves your bacon withdrawl:)

This is the perfect meal!Carbs, lacteos and protein! That must be some tasty stuff!

ooo yum, nothing better and bet it's so savoury and tasty.

You used to make your own bacon??

I bow down to your culinary prowess!! *insert angelic music* Amazing!

You know I think I saw him make that, but it didn't look nearly as appealing in his kitchen as it does here on your blog. Will have to make that soon.

Holy crap! My husband would probably buy me a car if I made this for him! It is beyond words! I've got to go run to the store to buy some more bacon. :D

Those photos look good enough to almost turn me into a bacon eater!

I think I saw that episode of Chef at Home, like, a dozen times and every time, I wish I had a slice of that tart. Now that you've made it, and added smoked paprika no less, I want some even more! I need to plan a dinner party or something. :)

I am seriously bacon and corn ice cream! Bacon anything would be good..

Hell ya! I am sooo making this after this weekend(we are in the high 80's).

THis kind of makes me think of the ham and potato casserole that my mom used to make...except in pie form!

Oh god. So wrong and yet so right!

I saw that episode too! I got scared at the amount of bacon -- well, that's not entirely accurate, because I got scared AND excited at the same time.

Ah, sort of like methadone for heroin addicts, huh? Heh :) But I think that analogy would mean using something sort of like bacon, but not bacon. Like soy-based bacon bits. Hahaha! :P
I don't think I'd be able to resist getting a big portion of that "cake" if ever I come across it! Lovely!

It's really late at night and I am going to bed hungry as a wolfe after seeing this! Awesome!

Whoa this looks GOOD. Like really really good. It is one serving isn't it? ;)

I also have this recipe featured on my site. It is so indulgent and perfect for feeding a group of guys anytime. :) Michael Smith rocks!

oooh...lala...that is quite the cure for bacon withdrawal! :)

You are a woman after my own heart :)

I love a nice maple cured bacon...sadly though yesterday at the childrens camp I spent the entire day precooking 30 pounds of bacon..no bacon for me for a while..it's still in my hair:D But ...saying that I have bookmarked this recipe to give a try once I get over my adventure:D

I seem to always have good luck with Michael Smith's recipes and this one looks like yet another one I'm going to try. Looks wonderful.

Potatoes, check. Cheddar, check. Bacon, heck yes, check. What is not to love? It looks fabulous!

we used to do this at a restaurant i worked at back home...i remember seeing it in the Chef At Home book...it ALMOST looked like too much...still havent tried it though...big ups to Mike Smith for repping the East Coast yo!kjqiwnb

hmmm this looks good.:-)tour cakes are so nice. you did very well in the course.

I want that.
I've been low-carbing lately and this post is hitting all my buttons!

After reading your post, I had to try making it! It turned out to be delicious- even better than I anticipated! Thanks for posting this one!

Wow-the combination of potatoes and bacon. I can't wait to try this!

I can nearly taste those potatoes wrapped in bacon. great recipe.

I have seen this episode a few times and I always think that this recipe looks so easy and good. Now I know it is I will have to try it.

That looks so amazing, I would eat it all in one sitting, I'm sure!

I don't know how I missed this when it first went up, but I almost instantly bookmarked it--this sounds so good!