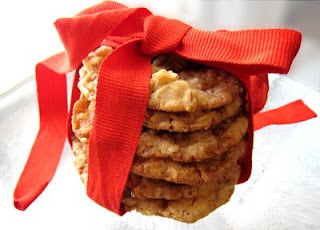 Danielle of Habeas Brulee is hosting Sugar High Friday #41 and has chosen Sweet Gifts as the theme. This is perhaps the easiest theme for SHF ever. I love to bake for other people. Be it for special occasions, birthdays or holidays, it’s all good. But most of all I like baking for others for no reason at all. I’m not going to lie though, sometimes I have ulterior motives… It’s much harder to dislike someone if they’ve baked you a sweet treat.

While perusing the blogs one day I saw a recipe for Coconut Toffee Almond Crunch Cookies that looked too good to resist. That combination of flavours sounded just about perfect to me and I knew I had to make them. After tasting a couple fresh from the oven I determined that these were the type of cookie that made people like you, great for bringing to work. Everything seems so much better when you’re handing someone an amazing cookie. Arrive late to work? One cookie. Need to take the weekend off? Two cookies. Want your co-workers to be nice to your? Three cookies. Handing in a resignation letter when three other people have just quit and the store is uber-busy? Tin of cookies. See, if everyone worked on the cookie system, life would be so much easier. 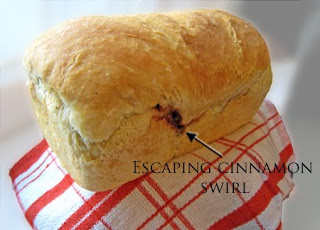 Next up on the sweet gifts list is Cinnamon Raisin Bread. It was a request that I got quite a while ago. It was at a time when I was experimenting with baking 100% whole wheat bread and didn’t feel like making a white loaf to fulfill this request. The person who made the request didn’t care much for whole wheat bread so I didn’t bother trying to make a whole wheat version out of the dough I was using. Fast forward a few months and I received another request for Cinnamon Raison Bread. As luck would have it, lately I’ve been baking bread from the absolutely wonderful book Artisan Bread in Five Minutes a Day by Jeff Hertzberg and Zoe Francois and had a batch of Soft American Style White dough in the fridge that was easily turned into a loaf of Cinnamon Raisin Swirl Bread. Unfortunately the person who made the initial request will not be getting any, but there’s nothing I can do about that. This bread will still be a sweet gift for the second requester.

I have been the lucky recipient of some sweet treats lately as well. Warda of 64 Sq Ft Kitchen decided that for her blog’s first birthday she was going to give away some fabulous Pierre Herme Chocolate Sparklers. Her daughter picked me to be the receiver of these delicious cookies and I was thrilled when they showed up on my doorstep, still intact, with only one broken cookie. Thanks Warda, they were great!

That wasn’t the only thing that showed up on my doorstep, I recently received a copy of Quick & Easy Indian Cooking by Madhur Jaffrey. There’s a catch to this one though, I don’t know who it’s from! It arrived via amazon.com so there’s no return address and the note that accompanied the book simply said “Enjoy!” I am most certainly enjoying the book and have already made Banana Halva, (which admittedly doesn’t look all that appealing, brown banana goo doesn’t photograph well, but it’s delicious) and have plans to try out all sorts of things from this book. But I can’t figure out for the life of me, if I won this book somehow and forgot or who might have sent it. So to the person who sent the book, a million thank yous!

I’d like to believe that I’m maintaining a sweet gift equilibrium. If I keep putting out good karma, eventually it will find its way back. 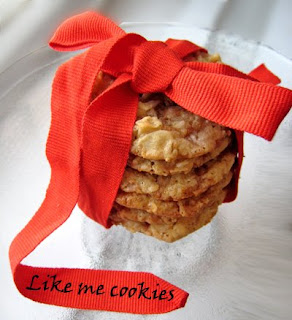 Ooo I've made those cookies too, and they are killer good. I keep those yummy heath bits in my pantry just in case it's a cookie emergency. Yours look absolutely beautiful!

The cookie system seems flawless to me. Everyone should adopt it...a much sweeter world would be at hand. Must try the recipe...it sounds great...might be hard to give away though :D

I love cinnamon raisin bread but haven't made it for years and years. Does yours have a swirl inside? that cinnamon sugar oozing out looks so promising!

That cinnamon raising bread sounds delish and the oozing sugar looks gooood! I have to give those cookies a try too! Nice little gifts.

I'd love you forever if you gave me those cookies! ;)

I'm glad to see you're enjoying the Artisan Bread book. I've got to try the white bread next!

100% whole wheat cinnamon raisin is very high on my list for must find and bake recipes, but it's not easy to find a non-bread-machine recipe that turns out nice and light. Would you be able to possibly share or hint at your proposed recipe?!? Preferably, a recipe that will cause an escaped cinnamon swirl =).

I've adopted the cookie system too, a while back... You know why? It works with kids too! :) Great looking cookies and the bread, fabulous!

I like this cookie system you've set up. And who needs to worry about the value of the dollar or the stock market anymore? If we adopted cookies as our currency, the world would be at one.

Hope you had a Happy Easter and love those cookies!

Maybe the US State Department will consider making you an honorary ambassador at large!

Lots of great treats!
I have a feeling I know you sent you your Amazon gift.

I agree--the cookie system is a much better one than our current one.

always have a stash of cookies in the pantry is a good idea. love the cinnamon raisin bread!

Wow, you've got delicious cookies and terrific cookbooks just turning up on your doorstep. It doesn't get much better.

Sometimes life calls for some "like me cookies"! And that's the truth! :) I also love the "escaping cinnamon swirl"! You totally make me laugh. Thanks!

I agree, life on the cookie system would be sweet.

And just look how sweetly the roses are coming up for you :)

Hi Brilynn! There's an award for you over here...

Oh the sound of that cookie is amazing. Has all the combinations that me and my husband would like.

All I can say is I wish I worked with you! I'm all for the cookie payoff. I would definately like you!!!

I'll be joining you in your cookie system - it's the best idea I've heard in ages. As for these cookies - another one to add to the ever growing list!

Brilynn, I think you're onto something with the cookie system...I could easily get on board with that! Your cookies and cinnamon bread both look delicious! :)

I approve of the cookie system. And these delicious looking cookies...and the stray cinnamon swirl says "eat me"...this all sounds delicious :-)

Those are some sweet presents you have there.
The cookies look scrumptious.
I'm going to have to buy that artisan bread book.

Cinnamon has such a cozy flavour! Brilynn, those cookies look delicious!

I love your cookie system. :) How wonderful to receive surprise gifts - I got one from a friend recently and it made several days in a row just a little bit happier.

Hi, i'm part of the special unit in charge of retrieving the escaped cinnamon swirl. hehe.
Fear not. I'm on the case!

I love the cookie idea! The cinnamon looks delicious and nice score on the book!

It seems that we all agree about the cookie system Brilynn. A different cookie every week would really butter them up:D Consider these particular ones bookmarked:D

I'm going to the store RIGHT now for ingredients!

Stop by for a visit. I'll even save a cookie for you! :D

Confessions of an Apron Queen: http://anapronaday.blogspot.com

This is definitely the type of cookie that appeals to me!!