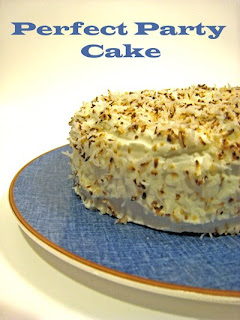 The end of the month means another Daring Baker challenge and this time our host is Morven of Food Art and Random Thoughts. Morven hails all the way from , a place I’ve had on the brain lately to visit. Morven chose a recipe from my favourite book that needs no introduction: Dorie Greenspan’s Baking From My Home to Yours. 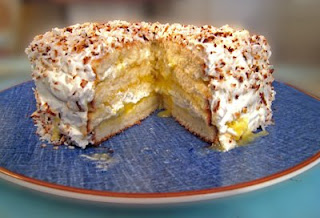 You might be surprised then to know that for a while I considered not making this recipe and bowing out of a Daring Baker Challenge for the first time. Shocking, I know. It’s not that I didn’t want to make this cake but that I couldn’t foresee any occasion that would warrant making it. And as much as I love cake, I didn’t think I could reasonably make it if I was the only one eating it. 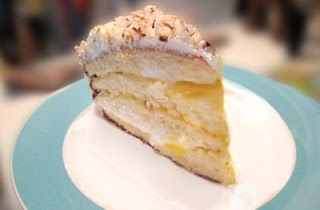 As the due date for this month’s DB challenge drew closer I started to think that I could cheat and throw up a picture that I had taken last year on my blog’s birthday when I made a version of this cake that incorporated three different Dorie recipes. For that particular cake, (pictured at the bottom of this post) I used the white cake, raspberry and white buttercream from The Perfect Party Cake, incorporated a chocolate layer made of Dorie’s Nutty Chocolaty Swirly Sour Cream Bundt Cake and spread both of them with Dorie’s Bittersweet Chocolate Ganache. It was an epic cake and certainly one worthy of being shown again. With that in mind I had resigned myself to the fact that I would not be baking The Perfect Party cake when Kmac, (you should all know her by now, she’s been around here a few times) said that she needed a birthday cake made. I told her I would do it, but only if I got to choose the cake. 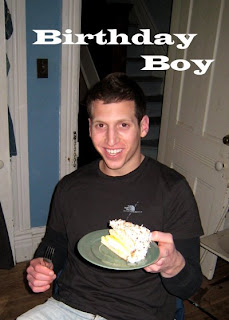 Instead of making The Perfect Party cake as written, I decided to tackle another Dorie recipe that I hadn’t made yet to go with it: Lemon Curd. I’ve been thinking of making lemon curd for a while now, which was fueled by seeing a St Patrick’s Day post by Tanna of My Kitchen in Half Cups where she made Lime Curd as a variation of Dorie’s Lemon Curd, (which she had also made previously). So my Perfect Party Cake was made with the lemon white cake, (as per the recipe) but it was layered with Lemon Curd and Whipped Cream and topped with Coconut Scented Whipped Cream and Toasted Coconut. 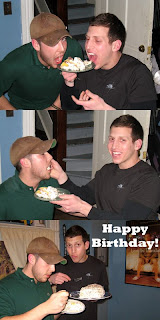 The birthday boy in question loves Lemon Meringue Pie, (and was actually the recipient of a couple of the mini Lemon Meringue Pies I made for the January DB challenge) and I figured he would also enjoy this lemon cake with coconut. So with a few hours to spare before the deadline, I made The Perfect Party cake, with a few variations and an extra Dorie recipe. The birthday boy was happy with his cake, (and was willing to share, as noted in photos…) and I didn’t have to miss a DB challenge. 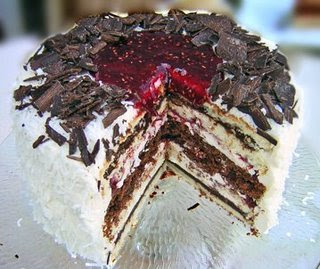 As always, if you want to see a million other versions of The Perfect Party Cake, check out the Daring Bakers Blogroll.

How totally fabulous! Whee . . . am I glad somebody needed a cake. A DB challenge without you and especially a Dorie recipe just would not work in my book.
And I'm so glad you put up that photo of the one from last year. It's Dorie's playing around attitude that makes for great fun.
Great cake!

Glad you found a reason to make the cake, because it is beeeauuutiful!

Oh, good job! I didn't manage to make the challenge this month, but it sure looks good. :)

I was thinking a nice curd might be good in this cake. Nice job!

I'm so glad you didn't have to miss out!! It looks wonderful.

Love that you made it for someone! It looks like a lovely cake!

So glad you didn't have to miss out. You are always so creative - amazing to think those two cakes came out of the same recipe. Sign me up for a slice of #2, please!

I'm glad you finally did it after all. It looks like it turned out really really well.

Bril, I am glad you did this because it looks simply fantastic. I love the lemon curd and whipping cream.

Well if ANYONE of us could be the master of playing around with the Perfect Party Cake it would be you!!! I'll be the lemon curd was perfect as the spread in the middle. Glad you didn't bow out this month!

Both versions on the cake look fabulous! And the lemon curd was a wonderful idea!

How fun that you made it happen in the end! Love the idea of lemon curd and I really want to try it again with that. Or, lime curd in my case.

Beautiful cake! Like the addition of the lemon curd. I'm glad you managed to make this month challenge. :)

I guess there were a lot of mixers turning yesterday! Like you I used a curd to fill and I loved the combination!

Good thing the birthday boy came along! Your cake looks delicious. The 'old' cake looks even more tempting with the chocolate!

Wonderful! I'm glad you got to participate. it's always more fun when you get to make it to share, isn't it?!

I always love popping over to your site to see your Daring Baker Challenge. You've never let me down!

both of you cakes look wonderful. glad you found a birthday boy to make the cake for and a lover of lemon. the curd looks great too!

I sure am glad opportunity knocked on your door because the cake turned out beau-ti-mous!! Well, actually both of them!

The lemon curd and coconut whipped cream are brilliant ideas. My two issues with this recipe were a slightly dry cake and a too-buttery buttercream, and here you are, providing wonderful solutions to both those issues. Yum yum!

Thank goodness you didn't have to miss out, especially on a Dorie cake! Great job :)

Oh-I'm so glad you found a way to make this- I've been looking forward to seeing yours all month!
Great combination of flavours!
Plus- Dorie would have probably been sad if you hadn't represented in this challenge.
Perfect Brilynn!!!
xoxo
Gabi

A fairy tale ending if ever I've heard one! Beautiful cake!

Lemon curd is always a good thing. And you got to make something else from Dorie's book. An excellent job on your cake...both of them.

I had to take a pass this month, but your cake sounds delicious, and the recipient sure looks happy!

You crack me up! I was tempted to cheat too! I've been so busy that I never started mine until 1:00 this morning!

Your cake looks awesome! I love the flavored cream and toasted coconut. That sounds really good!

Great job on the cake! I'm glad you found a reason to make it!

Next time I make this cake, I will be doing lemon curd like you have, it looks wonderful! I'm glad you joined in.

Nice job:) Iused lemon curd as well. It was great with the lemony cake, I thought! Glad you found a reason to make the cake!!!

It is SO hard to bake a humungous cake like this and have nowhere to serve it! Glad you found a taker. Great pics, too!

Fantastic job! Your cake (both of them) looks awesome! That lucky birthday boy...

Im glad you mad ethe challenge. The boys seem to love it judging by the photos.

Good work on the challenge. These cakes really are killing me, they're taking over my day dreams of peanut butter! I wish I was daring...

I'm glad you found a reason to bake the cake and join us for the challenge. Nicely done!

I so glad you didn't miss out because I always look forward to your creations! You did a great job on the birthday cake.

I used lemon curd as well. It's always a winner. Gorgeous cake and lucky birthday boy.

what can i say, as always your creations are stunning and makes me and hubby drool..hehehe would love to have a slice of this please

Brilynn, can I be your neigbour :)

Your cake looks good! I really like the sound of the lemon curd layer.

Even without a birthday boy, you could always find a taker for such a beautiful cake!

What a great idea to use the lemon curd. I'm sure the birthday boy loved it! Nicely done!

I'm so glad you decided to make it. And what a lucky guy he is to get one of your cakes for his birthday.

But how wonderful that it WAS! And what a lucky birthday boy!! Looks like a fantastic take on the perfect cake!

I'm happy you changed your mind - your cake looks terrific! (And I'm sure the Birthday Boy was thrilled!)

Beautiful cake, great job. I am glad you found a reason to make it.

You not do a challenge - no no no! Fab cakes, and what a happy birthday boy he must have been...

Isn't it great when things just fall into place like that? It would not have been the same without you.
And you are right, that bottom one is an epic cake!

What a lucky birthday boy! I think Lemon Curd is a great idea...of course, I'm pretty partial to it!

i too used lemon curd and boy did it rock this cake's socks off. it looks beautiful and glad you didn't have to duck out for the month :)

Your version of the cake looks and sounds delicious!

Glad you were able to join us Brilynn and good to know the cake was well received :)

Looks like you found the perfect munchers for the Perfect Party Cake -- the boys look so happy. Of course, who wouldn't be happy to live near you and get to taste all your terrific treats?

You done a great job with this cake! I wish i'd have thought of using curd!

oh it is so heavenly desired!

yummy!!!! I like the inside and outside of your cake!

I love everyone's take on this cake and going around the internet seeing them all!

Lemon is one of my favorite filling flavors and that just looks amazing.

Ha- Guess what? I made this cake tonight, even though I'm not a Daring Baker. I read so many posts about it, I thought I'd give it a try. It took forever to make.

My fav is #2, yeap another chocolate layer fan :)

You did a fabulous job on both of your cakes. I love the chocolate filled version...Yummmmm!

Perfect with lemon curd...and so pretty, too.

Hi,
Wanted to email you, but could not locate your email address on the
blog. we have 2 cool widgets ( a slideshow widget and a content widget
) which can help enhance site interaction and reader's experience. pl
contact me at ashishbaldua4@gmail.com to know more.