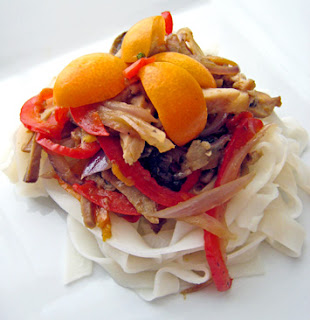 Porkquat. Awesome word. I just made it up. Feel free to credit me, (read: you must credit me or else you’ll suffer the curse of the porkquat) whenever you use the word in the future. Right. Anyways, sorry to have left you hanging at the end of my last post by saying “oooh I’m going to be making an awesome leftover dish” and “it uses a brand new-to-me ingredient, whatever could it be?” With an ending like that I’m sure you’ve all been wearing out your refresh buttons, just dying for me to put up this post. Or something like that. I’m sure you’ve deduced by now that my mystery ingredient is none other than the mighty kumquat. Fun to say, fun to eat, what’s not to like? Except possibly those blasted little seeds. Seeds are the bane of my existence. But I digress, prior to this week I had never had a kumquat. Then I started seeing them pop up on blogs everywhere and I’m nothing if not a bandwagon jumper so off I went to , determined to get on the kumquat bandwagon.

I walk through a few times a week so I’m generally up with whatever’s in season, (or in season somewhere on this earth, I guarantee there are no kumquat farms in downtown and yet we have kumquats). When I got to my favourite grocery store/fruit stand I saw what I had presumed were kumquats but they were labeled ‘sweet tangerine’. Hmmm. Well this certainly threw a wrench into my machine. I wondered around my store, eyeing the goods and trying to decipher foreign symbols and wonky English translations and after some time I decided that ‘sweet tangerine’ was simply a wonky translation that really meant kumquat. When I got back to my apartment I decided to turn to the ever useful thing the kids call the internet to figure out if my sweet tangerines were in fact kumquats. Since when does google fail me? Results for sweet tangerine netted a whole bunch of sites about some band called The Hush Sound who have a song called Sweet Tangerine and little else. Then I turned to MSN and noticed a fellow Daring Baker was online. I messaged Marce and asked if she had ever had a kumquat before and if she knew if it was the same thing as a sweet tangerine. I think she thought I was a little nutty. Fair enough. Eventually I decided, based on Marce’s suggestion, to compare pictures of kumquats to the sweet tangerines that I held in my clammy hands. Google Images redeemed itself here and I was able to figure out that they were in fact that same thing. Great, I have kumquats, now what do I do with them and how do I eat the little suckers? I’ve seen them used in both sweet and savoury dishes and decided to try my hand at both, beginning with an off the cuff savoury stir fry that utilized none other than the leftover pork roast. Since it was off the cuff, the proportions are all approximate. I was happy with how it turned out so I tried to write it down. After making this dish I put the rest of the pork in the freezer so that you won’t have to see it night after night for weeks on end. 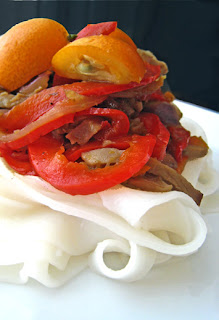 A pinch of 5 spice powder

5 kumquats, zested and then thinly sliced

Half a red pepper, thinly sliced

A quarter of a red onion, thinly sliced

Heat oil in a pan and add the ginger, garlic, 5 spice powder and kumquat zest. Fry until fragrant, about 30 seconds and then add the red pepper, mushrooms and onions. When it is just about cooked to your desired doneness, (do you like your peppers crunchy or soft?) add the pork and continue cooking until it is heated through. Toss with noodles and serve.

I am so jealous that you came up with the porkquat idea first! It's freakin' brilliant and you better trademark it fast, or the next thing you know you'll be seeing porkquat on the menu at TGI Fridays (not to say that's bad, just that you really deserve a cut...)

Porkquat!?! Cute! Can't believe these were your first.

hahaha! I love the name. Porquat! Do i have to pay you royalties for using it!
:-)

Great idea for the leftover pork. You know, I don't think I've ever had a fresh kumquat either. What is the fruit like? I have a loquat tree. Are they anything like them?

Porkquat is a much better name than Kurk. Or Kumork.

I've never had a kumquat!
You should enter this in the Foodie Joust. The ingredients are pork, citrus, and pepper.

Well, now, isn't that odd. I have leftover pork in the fridge but no kumquats. I think I saw them at the grocery!
Beautiful photos.

I saw kumquats going cheap at the store and this seems like a delicious idea!

I've never had a kumquat. I'll have to look for them!

I will definitely use porkquat in my everyday language, it sounds a bit dirty and naughty.

Also, call me crazy, but I think you can eat the seeds and the whole shebang. I'm not sure though as I've never had kumquats. But I vaguely remember reading somewhere that you can plop the whole thing in your mouth and eat it skins and seeds and all.

I loved this post, so funny! The word kumquat in itself is funny but porkquat is hilarious! That dish looks mighty tasty.

Love the Porkquat combination!
See I knew that pork would go to good use :)

Kumquats are unbelievable hard to find in Singapore, and we're spilling over with mandarin oranges. You're lucky you got them! Creative dish! And sweets in the making?

Looks good...kumquats, whenever I hear about those I always think of my goat I used to have named Kumquat!:)

Porkquat is fun to say, you're right!

hahaha no, i didn´t think you were nutty, though it was indeed a funny conversation to have. And your porkquat is indeed very intriguing. My creativity extended to a nice marmalade-like compote paired with brownies, I would have never though of pairing them with pork.

Very yummy idea! My daughter is enamored with unusual fruits and this looks much easier to deal with that recipes involving horned melons!

this is lovely and a refreshing combination: pork and kumquat !! i could already imagine the taste..i love it!!

The dish sounds so interesting and I thought the name is simple so CUTE!

And I hope you don't mind sharing 5 facts about yourself coz I've tagged you. :D

I have no experience with "quats" and its very cool that you used them in a savory dish.

Such an original recipe! I love them all: the combination, the photos, and the cute name :)

You know I've been all about the 'quats on my blog lately. So bring on the porkquat!

Thanks so much for the comment on my blog. This dish looks awesome! I'm always wondering what to do with the kumquats from my trees. Now I have one more use :)

Great looking dish Brilynn! I'm surprised they don't have kumquat groves in Toronto since the climate is so warm up there!