It's Gonna Be Another One of Those Hot Summers 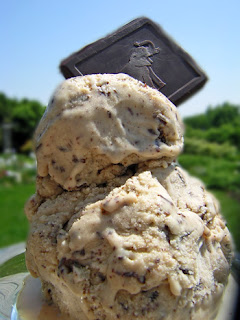 A second year of blogging deserves a new kitchen toy… like an electric ice cream maker! I have nothing against my old ice cream maker, (his name is Alastair) he was good to me, but it was time for him to retire. Alastair has worked hard all of his life, churning out almost 20 years of ice cream and it was time for him to enjoy retirement. Hasta luego Alastair, enter the Ice-Man. He’s sleek, shiny, powerful and makes a mean ice cream. What more could you ask for? For my first date with the Ice-Man we made Murphy’s Kahlua Espresso Ice Cream with Chocolate Shavings from Ice Cream . All it took was one velvety spoonful to cross my lips for me to know that the Ice-Man and I were going to get along very, very well. He does all of the work, churning round and around and I reap the rewards. He’s everything a life sponsor should be.

Not one to waste anytime, our second date happened the very next day. I had a ripe mango on the counter and fresh strawberries from the market, so a mango-strawberry ice cream, (with a little coconut rum) was a no-brainer. I wasn’t disappointed here either. I can’t wait for more fruit to come into season so I can ice cream-ify it too! This summer is going to be chockfull of frozen treats because I will never tire of them. This isn’t an infatuation stage, it’s the real deal. I love ice cream. I used to work in an ice cream store during the summer and people would always come in and say “you must be sick of ice cream after working here.” But I never was. I would go into work for a 12 hour shift and eat ice cream All. Day. Long. If I tired of one flavour, there were 49 others to tide me over. 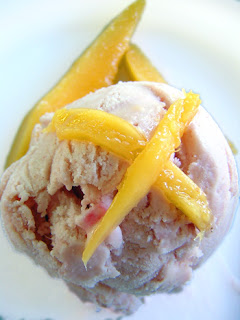 Bring milk and cream to a simmer in a sauce pan. In another saucepan, off the stove, whisk together egg yolks and sugar until fully combined and pale yellow in colour. Drizzle in some of the milk and cream, while whisking, to temper the eggs. Slowly pour in the rest of the milk and cream while continuing to whisk. Place this sauce pan back on the stove and heat until a thermometer registers 70C, do not surpass 75C as the eggs will scramble. Remove from the heat, pour into a bowl and place the bowl into a dish of ice and water, whisking to cool the mixture down.

While that cools, hull the strawberries and peel and chop the mango. Put the fruit in your blender, (get a K-Tec!!!) and pour in ¼ cup . Puree.

Pour the fruit mixture into the cooled cream mixture and stir to combine. Place in the fridge to chill completely before pouring into your ice cream maker. This last picture is of a chocolate-pistachio bundt cake that I made for one of the guys at work. Not only did I have to come up with a recipe, but I was also given specific colours for the icing. You would think that after all this hard work on my part, the recipient of the cake would at least show up to collect his goods. Matt called in “sick” that day and missed it completely. He claims he thought that it was the following week that I was bringing in the cake but that’s just silliness because I won’t be there then. So why was I even making Matt a cake in the first place? It started because I’ve been bringing baked goods into work lately since it gives me an outlet for my baking, (other than my mouth) and it means the people at work are nice to me because I bring them treats. It’s a win-win situation. Usually I bring in whatever I feel like making on that particular day, but since I like to make people happy, I started taking requests too, (I saw them as mini challenges). My first request was for a coffee cake, (for which I made Dorie’s Cardamom Coffee cake) the second came from Matt and was for a chocolate-pistachio bundt cake. He’d only ever had it once but liked it so much that he ate the whole thing. He described what he wanted and I set out to find a recipe that would fulfill the requirements. I based my cake on Dorie’s recipe for Nutty, Chocolaty, Swirly Sour Cream Bundt Cake but, among other variations, I increased the chocolate, added some cream and used pistachios in my swirl. I baked it up into an adorable individual bundt cake, personalized and everything and Matt had the nerve not to show up for work on the day I brought it in. The others enjoyed his cake for him and Matt’s name has now dropped to the bottom of the queue and he won’t be allowed to make requests for a little while. Let this be a lesson: If I bake for you, you’d better be there to eat!

Your ice cream sounds fab :) and if Matt was sick before he will be even more now, for missing your lovely cake!

That first picture of the Kahlua ice cream looks sooooo good. I have been asking for an ice cream maker every birthday, Christmas and Mother's Day for about three years....some day I'll get one. I have been saving a yummy looking coconut ice cream recipe just for the occasion!

Hey Bril.That caife ice-cream is my favourite when I go to Murphys in Dingle so I made some this evening too, isn't it just heaven?!
I'll be expecting that ice-cream maker to be put to good use again soon!

Welcome to the family, Ice Man!

Wait...you have a job and cook all of this great stuff too? For some reason, I just thought you stayed home all day baking fabulous stuff! How do you do it??
That ice cream...mmmmm!

Your ice creams sound wonderful. And I'm jealous that you have an ice cream maker...And how could Matt call in sick when you were bringing him cake! I didn't realize you were working also. I thought you stayed at home also and created all this deliciousness!

This must be the 3rd post about ice cream I came across today. I must have some ice cream now, although it's freezing here!

I hope you and the Ice Man will be very happy together!

What a fool to miss that beautiful cake! I'll happily eat the whole thing for you!

Ditto what Kristen said. Where do you find time to do all this baking?

Bri, I had a laugh with you - Matt will never forgive himself for having missed this wonderful and beautiful cake!

Holy cow, you are certainly going big with the ice cream! They both look fabulous. And what's up with Matt not showing up to claim his cake? Of all the burnt crust!!

Without a moment of hesitation I will ing admit that ice cream is my very favorite food. Oh yum. Strawberry/Mango sounds just wonderful.

Great ice cream photos! I need to crank up my machine! Summer is here and I can't wait to indulge:) I want to try your strawberry mango recipe. Looks Delicious!

I make strawberry mango smoothies a lot, but ice cream would be much yummier!

I've had a regular ice and salt machine forever, but once I made David Lebovitz's vanilla ice cream, my husband agreed to let me buy a new machine that didn't require the ice and salt. It was only $30 and worth every penny!! I love ice cream!

Sounds like you will have a wonderful summer of ice cream with your new toy! Delighted the recipe turned out well. And your strawberry and mango looks wonderful...

Brilynn, love your site. What about combining the delicioius tema cookies with ice cream. Peanutty, chocolately, ice creamy goodness. Those cookies are now a firm favourite.thnaks for the recipe.

The bundt cake sounds delish as well.. but I'd question Mark's choices in colors.. quite possibly he is color blind? hehe

I just love the sound of that kahlua ice cream! Am so jealous of the lovely summer that you're having right now. It's a cold winter down in Melbourne this year. Not sure I'm brave enough to make ice creams this winter.

Brilynn, I'm every bit the fool for ice cream you are. I got a hand-me-down electric ice cream maker from my in-laws a few years ago, and I give it fairly regular workouts. I have a question about the mango ice cream: did you strain the mango after pureeing it? I tried making mango ice cream once, and found it a little stringy from the mango. Nonetheless, I applaud your improvisation with the mango-strawberry combo, and that Kahlua-espresso ice cream looks deadly.

What a bummer that you made that cake and then he didn't show!
Yum on the coffee ice cream.

Mango and strawberry sounds like a delicious combination. I'll definitely be making this when I get some mangos. Thanks for the recipe! And I'm with you, I can't wait to ice creamify or sorbetify all the fruit that will be coming into season. I'm waiting for white peaches. Mmm...

Jeire- You're a genius! I am definitely going to make some ice cream inspired by the Team Cookies.

Rob- You of all people should have a K-Tec blender! I can't believe you'd even ask me if I would strain the mango, it's not necessary when you're blending with a 3 horsepower blender... it's pureed as smooth as silk.

I think Ice-man will feel just fine amongst all of us drooling folk here. The Kahlua ice cream really looks great.

Can I expect Ice-Man to make a guest appearance at the MM?

As for that cake - WOW vivid colors.

I'm entranced by the ice cream, especially the first one. The flavors for that sound amazing.

Yay for Ice-Man - I'm glad you guys hooked up because tis the season for ice-cream!

LOL about the Matt Cake. Didn't you post about a similar problem where you made something for some guests and they were quite late showing up?

Being able to make your own ice cream is the easiest- and bestest- thing in the world! While I love the first, mountainous photo of the scoops, a strawberry-mango combo is just the speed.

how rude of this matt! his cake is too cute though, i love the frosting.

that ice cream, both flavors, look incredible. i need to buy myself a machine especially now that it's getting hot out.

Homemade ice cream on a hot day......can it get any better that this? Great recipe which I'll have to archive seeing as I don't have an ice cream maker. Cheers!

Excuse me for commenting so late on this... does the Ice-Man have a built in refrigeration unit, Brilynn?

The reason I ask is that my sister has lent us her high tech cuisine-art ice cream maker with built in refrigeration unit. We have a donvier that has been somewhat unsatisfactory (shards in the ice cream)

For the first time, with my sister's ice cream maker, the ice cream is absolutely stellar. And we think we neeeeeeeeeeed to buy an electric one. But do we have to spring for one with a refrigeration unit or can we safely get the kind that has a container that is to go into the freezer before being used? (ie: does the churning cause the container to get too warm?)

P.S. Mango ice cream... my favourite! (Even though the lime ice cream in the freezer right now is unbelievably fabulous.)

Just had my first (huge) dish of the strawberry-mango ice cream. Verdict: YUM.