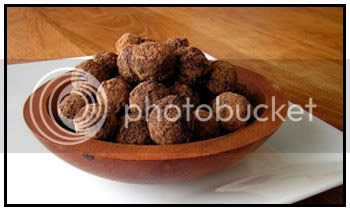 Gee, truffles for a Sugar High Friday with Chocolate as the theme, how predictable. I’m sooo boring. I simply can’t come up with anything other than a chocolate truffle. Ha! I laugh in the face of boring! Truffles? Hardly! Looks may be deceiving. Granted, I didn’t actually come up with this idea, but I love it. They’re grapes covered in chocolate and don’t feel bad if you were fooled and thought they were truffles, everyone is. I think I giggled like a giddy little school girl every time I offered one of these to someone new. Each person would look at the bowl and exclaim “oooh truffles!” (or something like that) and I would smile innocently as they plucked one from the dish and popped it in their mouth. I delighted in watching their expression as they bit into the “truffle” and were greeted with a burst of juicy grape. I suppose if you have a huge chocolate craving and you get one of these instead, you might be disappointed, but mostly people are happy to have been deceived in such a fun way. 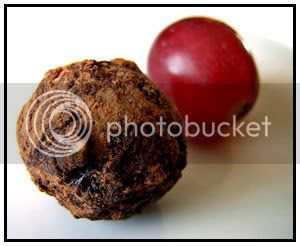 This will likely not be the chocolatiest entry into this month’s round of Sugar High Friday, but I think it’s an interesting one. David Lebovitz is hosting and has chosen Chocolate by Brand as the theme. The “by Brand” part of the theme wasn’t a huge thing for me. I have to admit that I don’t usually go for some fancy chocolate brand. That’s probably not even an option where I live, apparently country folk don’t eat expensive chocolate. I hardly even make note of what brand I’m buying unless I really didn’t like it and then I won’t get it again. But don’t listen to me when it comes to chocolate. Someone like Sir Lebovitz is in a much better position than I to speak about chocolate and he could probably tell you exactly what brands are better for what ventures, frankly though, I haven’t got a clue. All I know is that there’s a huge variety in price and I don’t know if the price actually reflects an increase in quality or an increase in fancy marketing. That being said, there’s all types of chocolate in my cupboard because I don’t have a loyalty to any one. I’ve got Baker’s, Cote D’or, Lindt, Organic Fair Trade and Presidents Choice, just to name a few. They come in varying degrees of chocolateness and on any given day I might have unsweetened, semi-sweet, bittersweet, 60%, 70% or 80% cocoa chocolate bars at my disposal. I have no hard and fast method for choosing which one I’m going to bake with either. If a recipe calls for a particular kind, I’ll likely use that. However, if it calls for entirely milk chocolate, I’ll likely balance that out with a little dark chocolate because that’s what I prefer. 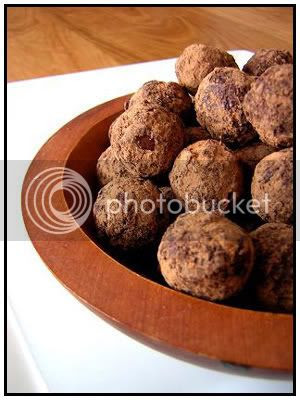 For this unbelievably easy recipe which I got out of Michel Richard’s Happy In the Kitchen, (great book!) I used a dark Organic Fair Trade chocolate bar and cocoa from Just Us! Coffee, ’s first Fair Trade coffee roaster. I know you’re thinking that sounds a little too fancy for me, but I can explain, it was a gift. The dark chocolate is 70% cocoa and I like it quite a bit. I also think that most people wouldn’t notice a huge difference between this chocolate and any other one I could have used unless they were doing a side by side taste test or they really had strong feelings about chocolate. I find there’s a lot of snobbery associated with particular brands. It seems some brands may be fundamentally better but I think a lot depends on personal taste too. I’m not one to discriminate, I’ll try anything. And I’ve tried a lot of chocolate. I’m not saying there’s not a difference in taste between good and poor quality chocolate. It’s very true that some are exponentially better than others and that if I had tons of money, I’d always buy the top quality, but I don’t. So I appreciate really good chocolate when I have it, but I settle for a reasonably less expensive variety the rest of the time. 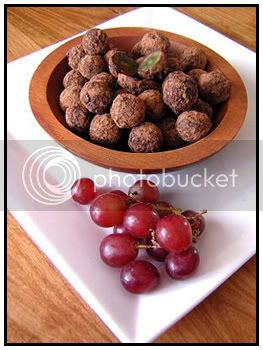 Chocolate Grapes from Happy In the Kitchen
(or as I like to call them, Faux Truffles)

Dry the grapes and place them in a bowl large enough to toss them easily. Line a baking sheet with a Silpat or parchment paper.

Add the chocolate to the grapes about 1 tablespoon at a time, stirring well with a spatula, carefully scraping the sides of the bowl and folding through the center of the grapes to coat them all evenly.

When the chocolate begins to set, using a small strainer, sprinkle the cocoa powder little by little over the surface. Gently toss or stir the grapes as you sift, continuing to add the cocoa until all of the grapes are well coated and separated. Spread on the prepared sheet.

Cover with plastic wrap and refrigerate until the chocolate is set, or for up to 1 day.

*Note- since I used 70% dark chocolate, I also added a bit of superfine white sugar, I probably didn’t need to.

Question- Is my blog displaying any better now? And why are people using anything other than Firefox? Whyyyyyy?

Labels: Blogging Events, Chocolate, Fruit...sort of, Sweets of All Kinds

That is such a cool idea! I should make some and put some in my kids lunches this week, since grapes are on sale this week. (Sneaking fruit into them always requires cunning!)
And I'm with you - why would anyone want to use anything but Firefox? It cuts down on the pop ups and seems to work so much better.

great entry and terrific idea. Thanks for participating!

(and us Mac users are stuck in Safari, although Firefox looks more appealling every day...)

what a great idea! I also love your banner!

mmmm so tempting I´m trying not to drool on the keyboard.
And your new banner looks great!

I hope no one is allergic to grapes...that would have been a surprise to you :)
Those look good and very original.

Brilynn, this is a great idea. Grapes and chocolate sounds delicious.

Brilynn, the combination of grapes and chocolates is something new, very creative. I am so happy that you have finally solved your header problem. Your header graphic looks great.

I wish I were that clever! Sneaky you! This recipe looks really yummy!

You are a sly one :D. Can just imagine their faces after tricking them into eating your grape covered chocolates. In anycase I'm sure it tasted great! Your banner looks terrific to me. Nice job!

I don't think I've ever "cooked" with grapes, but as they're one of my favorite flavors I'm sure these truffles would be fabulous! (I know Martha Stewart has a grape-pie recipe, but that just seems ... odd to my untrained brain.)

Had me fooled, too. Cute idea. Your new banner is fantastic.

Brylinn, i love your combination of chocolate and grapes... I would love the 70% coverture version. The darker, the better (for me!). I think your truffles will taste great with a cup of espresso!

Fantastic idea! Good way to get kids to eat fruit as well (if not all that healthy!!). I love the cross-section shot, wish there had been a close up because it would have been stunning!

p.s. I don't use Firefox as it kept messing up my computer =)

Your banner is really nice!

Your banner looks fabulous! As do you truffles :) And what an sneaky surprise that would be...although definitely a yummy one for me! :) I can just imagine how it would taste...mmmmmm

OK, I've now seen this recipe enough times that I absolutely have to try it! My doctor once asked me what's the one food I couldn't give up, if I had to give up everything else? She thought I'd say chocolate, but I said "grapes"!

You are such a sneaky thing! Do they taste kind of like chocolate covered raisins? I think I'll have to make these sometime just to find out. They sound scrumptious!

Speaking of scrumptious, your banner is brilliant. I love it (and Love Firefox too!)

Chocolate grapes? I never would have though of that combo. But I do like chocolate covered raisins so I can see that.

I used to be a city girl so I got used to all those yummy designer chocolates! But I have never cooked with them before this SHF. I just like to pop the chocolate in my mouth and let it melt there. Yum!

That's so clever. And I love the way it looks when you cut it--the green contrasting with the chocolate.

Gruffles!! You are a GENIUS!

hehee very cute idea and I love the presentation of them.. I just bought grapes and can you believe it? I've got a freezer FULL of chocolate. Hot damn!

What a great surprise dessert! I'm really curious - I never had anything like that. And thanks for leaving such a nice comment at my blog!