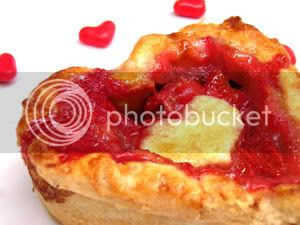 I’m always happy to participate in any event that Meeta of What’s For Lunch Honey? is hosting, so much so that I’m currently involved in two of them. Every month Meeta hosts a little mingle over at her place and since Valentine’s Day is rapidly approaching, she has chosen Sweet Love as the theme for this month. Meeta professes to love Valentine’s Day but I can’t say that I share her sentiments. Maybe it’s because I hated pink as a child and there’s an abundance of it around Valentine’s Day. Maybe it’s because stores stock pile heart shaped chocolates that taste like plastic and yet we still buy them. Or maybe it’s because I’m a single and cynical. The only good part of Valentine’s Day is that it gives me another excuse to bake and eat sweet things. Oh, and I like cinnamon hearts too. When I was younger, (last year) my friend and I used to have competitions to see how many cinnamon hearts we could eat before our mouths caught on fire. It usually got to the point that we didn’t have tastebuds and couldn’t taste anything for days. 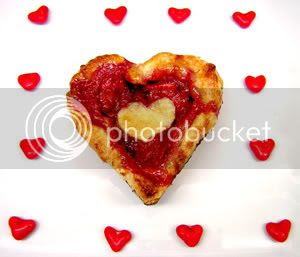 The thing about Valentine’s Day is that it celebrates cute, mushy things and I can’t support that. People give teddy bears and flowers and boxes of chocolate, all of which are some shade of pink, (what a wussy colour) and they seem to throw out all common sense. At what other time is it acceptable to give someone an ugly pink bear with a fuzzy heart glued to its chest that says “I WUV U”? Never! It shouldn’t ever be acceptable, and yet Valentine’s Day makes people do all sorts of things they shouldn’t. Don’t even get me started on the baby talk… The only acceptable gifts on Valentine’s Day are high quality chocolates, (read: not the kind that only appear at Valentine’s Day in Quickmarts) cars, houses or cookbooks. 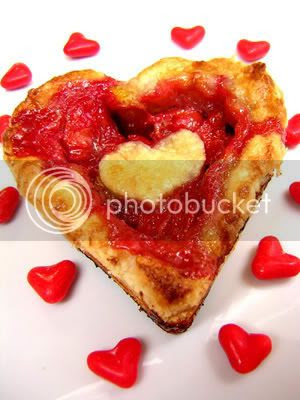 Despite my dislike of the day, I will indulge Meeta in her liking of it and am therefore submitting this cherry dessert. And yes, I’m aware that it symbolizes everything I don’t like about Valentine’s Day: it’s cute, it’s heart shaped and it’s a shade of pink. But it’s tasty. I made it with some leftover sweet dough and a bing and sour cherry filling. I considered showing a picture collage of its subsequent destruction, but instead I gave it to Mom and she appreciated it. 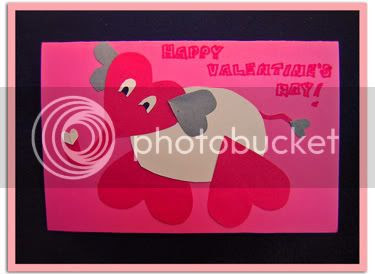 Meeta is so caught up in Valentine’s Day that not only has she organized her Monthly Mingle around it, she’s also hosting the second round of Blogger Postcards from Around the World with Happy Valentine’s as the theme. She’s trying to force me to like it. Let the record show that I’m participating, but that I’m doing so in protest. Above is the card I made, (you just can’t find good Valentine’s postcards) that’s being shipped off to some secret destination. Before you even start on me for making such a pink and heart filled card, I’d like to say that I didn’t do it because I like Valentine’s Day, I did it because I like being crafty and I like elephants.

Labels: Baking, Blogging Events, Fruit...sort of, Sweets of All Kinds

pretty tart and beautiful postcard, I'm sure the person receiving it will enjoy it!

Hehe you make me laugh Brilynn!
I was thinking of doing that craft with my preschool kids (went with heart shapped people instead.)
And for the record, other acceptable gifts are diamons and computers, assuming you like them. I like the computers, not so much the diamonds.

So creative! I love what you did with the tart!

I'm married and don't like V-Day. Why give men one more day for their wives to be disappointed because they didn't meet their expectations?

I love the card you made! Too cute!

LOL, great post :P I've got to admit, I like the *idea* of V-day, but am yet to have had a bf who meets expectations (I'll share the story of the last ex when I put my post up for this event!).

As for the card - that is sheer awesome! I always think that handmade gifts are the best way to show that you care :)

"Oh, and I like cinnamon hearts too. When I was younger, (last year) my friend and I ..." LOVED THAT.

And I like pink. It makes me feel pretty when I wear it! Pretty in Pink, anyone?

Valentine's Day doesn't have to be just for lovers. I know your mom appreciated the gesture! I always get a Valentine's Day card and little gift from my parents. I think it's very sweet!

Gorgeous tart. I love all holidays, Valentine's included, so I love that you transcended your disdain and came out on the other side with such beautiful results.

Hey Bri!! For someone who does not like Valentine you sure made a a gorgeous looking tart and a fantastic card. You wait and see I'll convert you soon LOL!
I really enjoyed the post and tahnk you so much for taking part in the events. You've become one of those persons that I love having around and would hate to miss.

I've never heard of cinnamon hearts before, they look amazing.

har! I could just feel the oozey woozey pink fuzzy lurve coming from this post!

I heart the tart (geddit? heart?! HA!) not only does it sound delicious it's probably the cutey wootey'ist concoction I've ever had the fuzzy wuzzy joy of seeing.

Now that I've had my injection of good vibes wrapped in a pretty pink cloud, I'll be good for the rest of the day! Thanks and smoochies! :*

I just saw your comment over at my blog and had to steer over here to check out your card. Brilynn, it's brilliant! I love how you have used the heart shape to construct and deconstruct the elephant!

Brilynn, it only counts as a valentine dish if you cook it on the 14th Feb...all other times it's just a heart shaped dessert with some red undertones. Think of it that way! The card is painfully cute though!

Okay! That is the most adorable elephant I HAVE EVER SEEN!!!

This is such a gorgeous dessert! I'm not a huge Valentines Day fan either, but I always appreciate a beautiful bit of something sweet to eat. :)

I say it's cool you liking elephants. I wish I were so crafty.