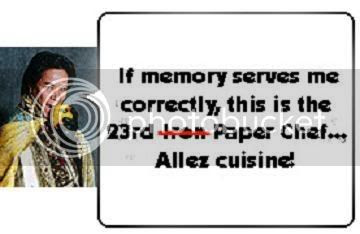 I love a challenge. As a result of this, I can often get suckered into doing something I don’t really want to, just because someone challenged me to it. You can get me to make pretty much anything by telling me I can’t do it or that you can do it better than me. My ego can’t handle the thought of being inferior so it puffs itself up and tells me “of course you can make that/do that, and you’ll do it better than anyone’s ever done it before.” Grudgingly, I attempt to do whatever needs doing. Stupid ego. This is the case with a particular blogging event called Paper Chef. It is now in its 23rd edition. The basic premise is that four ingredients are chosen at random from a list of possible ingredients and after the final four have been announced, you have a weekend to come up with a dish that incorporates those four ingredients. This sounds easy enough, but when I happened upon this event during its 21st edition, the four ingredients were giblets, eggs, fermented black soy beans and something that reminded you of Africa. Buhwah??? I thought about it for a while and then conveniently was out of town that weekend. I don’t really have an excuse for missing the 22nd edition except that I didn’t realize it was going on, silly me. I’m ready to take on the challenge now though, so without further ado, I present to you my creations for Paper Chef #23, hosted by Tomatilla!
Challenge: Vermouth (interpreted as any fortified wine or herb-influenced liquor), Cranberries, Sparkling drink (of any kind) and Something Wild, (interpreted however you like, could be wild in nature, could be zany-wild). Allez cuisine! 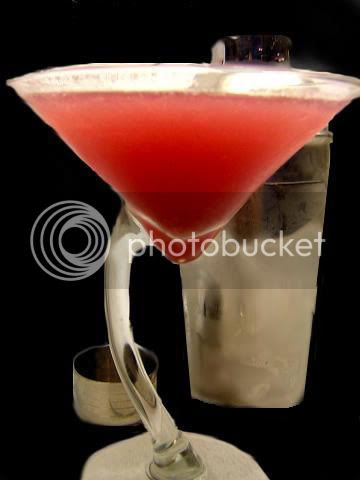 For my first offering, a Wild Cherry Gin Fizz. I concocted this recipe myself just for the occasion and I have to say, I was quite pleased with the results. I’ve since become reacquainted with my shaker, making drinks is fun! Shake shake shake! 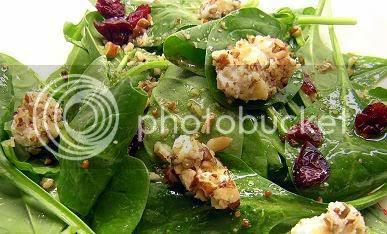 Now that you’ve wet your palate, let us move on to a salad. I hope you enjoy delicate baby spinach tossed in a vinaigrette of sparkling apple drink, olive oil, grainy mustard and a pinch of sugar, topped with dried cranberries and warm goats cheese rolled in toasted pecans. Let the dressing tickle your taste buds and delight in the variety of textures as the crunch of the pecans gives way to the smooth and flavourful goats cheese.

Ingredients Checklist:
Vermouth :(
Cranberries √
Sparkling Drink √ (Apple-Peach Sparkling drink)
Something Wild √ (I’m declaring the goats cheese to be wild… this category is easily interpreted and I’m milking that for all it’s worth) 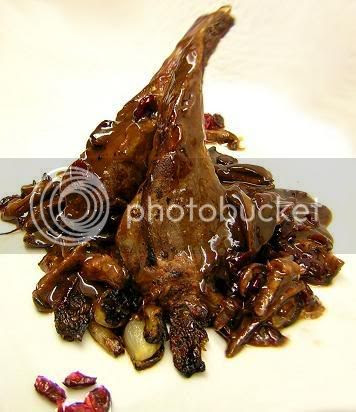 Prepare yourself for the pièce de resistance; tender, succulent venison chops, drenched in a rich cranberry gravy, studded with shiitakes. It’s a feast for the senses. Watch as your knife glides effortlessly through the moist chop, breathe in the heavenly aroma and then let the flavours swirl around in your mouth, blending wonderfully on the tongue. Don’t forget to save room for dessert…

Preheat the oven to 425°F. In a roasting pan toss the shallots with the oil and salt and pepper to taste and roast in the middle of the oven, stirring occasionally, for 12 to 15 minutes, or until they are golden.
Pat the venison dry, season it with salt and pepper, and rub it generously with additional oil. Heat a large heavy skillet over high heat until it is hot and sear the venison on all sides. Push the shallots to the sides of the roasting pan, stand the venison racks in the middle of the pan, allowing the bones to rest together, and roast the mixture in the middle of the oven for 23 minutes, or until a meat thermometer registers 125°F., for rare meat.
Meanwhile, sauté mushrooms in the pan used to sear the chops, set aside.
When the chops are done, transfer them with shallots to a platter and let them stand, covered loosely with foil, for 15 minutes. To the roasting pan add the broth, wine, mushrooms and gin and simmer the mixture, scraping up the brown bits, for 5 minutes. Whisk the cornstarch mixture, and add it to the saucepan with the cranberries, the balsamic vinegar, and salt and pepper to taste. Simmer the gravy, whisking, for 5 minutes, until thickened. Pour the gravy over the chops and serve.
Serves 2.

Ingredients Checklist:
Vermouth √ (gin, and while we’re stretching things, there’s red wine too)
Cranberries √
Sparkling Drink :(
Something Wild √ (If the venison’s not wild, I don’t know what is! From my backyard to the table..) 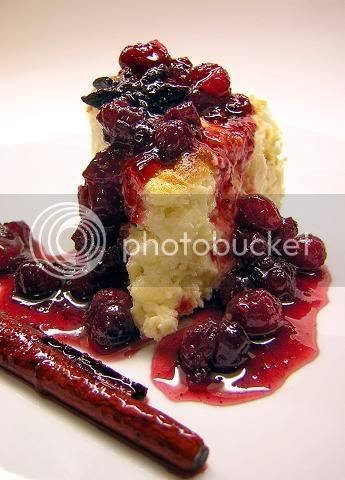 No dinner is complete without dessert and I assure you, you’ll be glad you left some room for this one. A tall, light and lemony cheesecake smothered in a fresh cranberry and opulent port sauce. Creamy and delicious.

Preheat oven to 275 degrees F.
Combine graham wafer crumbs and melted butter in a small bowl. Stir well and press into a 9” springform pan that has been lined on the bottom with parchment paper and greased.

In a large bowl combine cream cheese, sugar and salt. Beat just until smooth. Do not over beat the mixture – you don’t want to incorporate too much air in the cheesecake – it increases the chances for the cake to crack and fall. Add the egg yolks three at a time beating after each addition. Scrape down sides of bowl and add the sour cream, lemon juice, vanilla and zest. Blend until just smooth, careful not to over beat the mixture. Add cornstarch and mix until smooth.
In a clean stainless bowl whip the egg whites until soft peaks hold. Fold egg whites gently but quickly into cheese mixture, making sure no streaks of the egg whites remain. Again do not over beat the mixture.
Pour batter into prepared pan. Bake in middle of oven for 70 minutes or until cake is just firm. If it is not golden on top at this point, increase oven temperature to 300 degrees F and bake another 10 minutes until cake is golden. Turn oven off and open oven door. Leave cake in oven for another 20 minutes. Remove and cool completely.

And there you have it, a complete meal filled with the four secret ingredients, served in a relaxed and comfortable atmosphere. Consider this challenge complete... Oh, and since I'm a multi tasker, I'm using the Cherry Gin Fizz for this round of Mixology Monday being hosted by The Spirit World.

I think i might have to skip the salad to make room for the dessert!!!

Brilynn, what a meal!
Your blog is real fun, I've just bumped into it and I am going to put it in my favourite list, if you do not mind...
Ciao!

I'll bet you CAN'T deliver this dinner to my house so that I can introduce it to my tummy instead of my eyes. Oh no.. there's no way you could do that.. and I'll even wager you CAN'T bring some of that hot chocolate and a loaf or two of the bread as well as a nice warm pizza pie with you as well. Nah.. you can't do it.. it's so funny to think you could.. you just don't have it in ya.. I can tell.. I think I'll go ask Peabody - she can do it! Yeah that's what I'm going to do!! She'll get it to my dinner table in no time!

hahhaaa I just crack myself up. 'kay I need more coffee. *smoochies*

This is quite an incredible post! I'd love one of those drinks if it had a plastic monkay

This all looks so beautiful. I don't know how I hadn't found your blog sooner, but I love it! Great picture of the Chairman.

The entire meal looks fabulous! I hope you win :)
I especially love the salad. I can practically taste it.

Oh, YUM. Those venison chops sound really delicious -- great use of the ingredients to make a complete meal!

you're a genius...absolutely wonderful selection of dishes!

Wow, what a meal! It all looks amazing. I love the glass in the first picture too.

Wow!! Lots of work and yummy looking food & drinks too.

Plus, as always, your writing surrounding the recipes is always fantastically entertaining.

brilynn, you have gone above and beyond. it all looks amazing!!

Slow down! How can I read all of your posts if you make them so damn fast?

Excellent work, the venison is right up my street.

Oh hon...is it fair for you to tempt us with quite this much deliciousness in just the one post?

You rose to the challenge wonderfully, and these recipes are all amazing - not to mention the mouth-watering photography accompanying them!

what an elegant dinner! love the colors.

Congrats on your Paper Chef win - what an amazing combination of dishes!