Happy Birthday to Everyone! 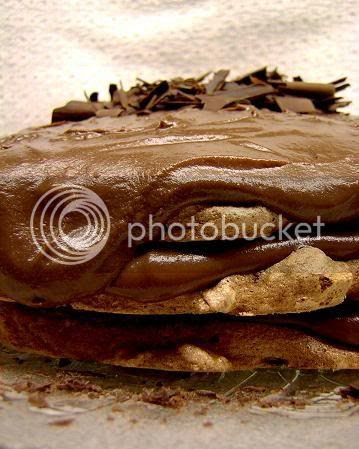 There will be more about that gooey chocolate stack you see above later, but you’ll have to eat your dinner first, (and appetizer and salad and don’t forget to drink your wine too). Bruno of Zinfully Delicious tagged me to participate in a meme called the ‘Foodbloggers Welcome Dinner’ which was started by Angelika of The Flying Apple. 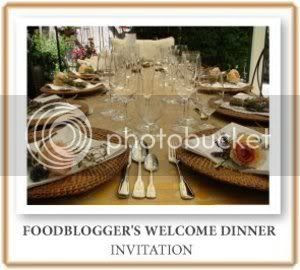 The idea is to create a menu that you would serve to fellow foodbloggers if they were to come over for dinner. I think a Foodbloggers dinner is reason enough to celebrate and since my birthday is also reason for celebration, I’m combining the two causes. Sunday, (the 5th) was my birthday and I’d like to share with everyone the menu that I prepared, (with some help, afterall it was my birthday, I couldn’t do everything). 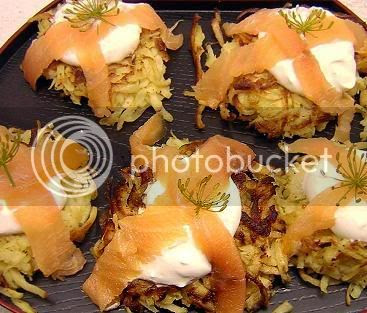 If you had of been at my birthday dinner I would have started by serving you some grated parsnip and apple pancakes topped with crème fraiche, smoked salmon and a little dill. These are actually good served warm or cold, so in the rare event that there are leftovers they can be gobbled up for breakfast however you like them. 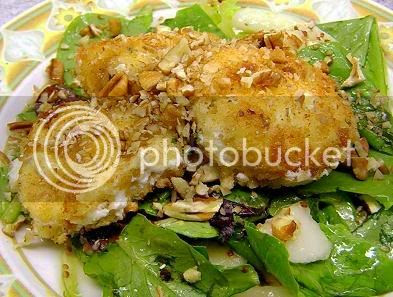 Next I would present you with a warm goat cheese salad with pears and pecans. The original recipe is from a 1997 issue of Bon Appetit, the source of all things good. The goat cheese would be perfectly crisped on the outside and soft and warm on the inside. The pears and pecans complimented it very nicely as well. But I warn you not to fill up on salad, because the pièce de resistance is yet to come. 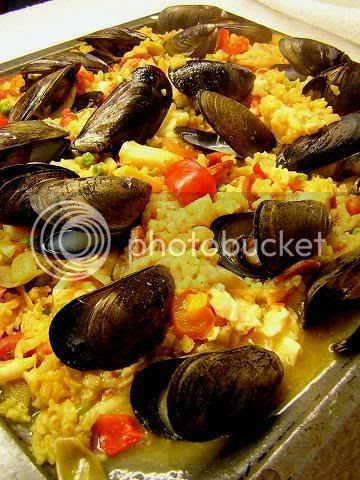 Drum roll please as I bring out an amazing paella. It’s filled with only the best of ingredients and includes shrimp, mussels, scallops, lobster, fish, peas, peppers, onions, artichokes, Arborio rice, saffron, wine and chicken broth. Help yourself, there’s plenty to go around, no one will leave here hungry. In case you were wondering, you won’t go thirsty either; I’ve long since uncorked some excellent bottles of Riesling from Ontario’s own Stonechurch winery. I can tell some of you have definitely been indulging… Just try to stay sober enough for cake because this is one you don’t want to miss. 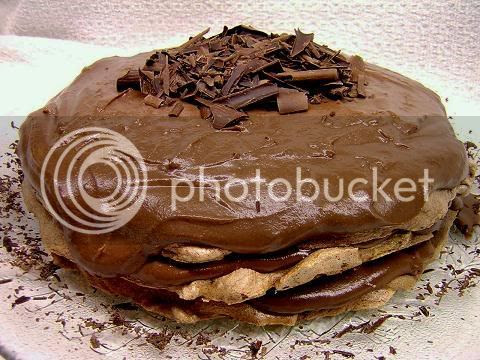 Traditionally I’ve had a black forest cake on my birthday. I don’t know why, that’s just what Mom always made me. This year, much to Mom’s dismay I wanted to make my own cake and I take full responsibility for the outcome. Ok, so maybe Nigella provided the recipe for this Gooey Chocolate Stack in her book How To Be A Domestic Goddesss, but she wasn’t in my kitchen making it, I was, and I did a damn good job too. I don’t think you can quite call this a cake though; it’s more like a giant macaron. Yes, you heard me right, a giant chocolate macaron! How’s that for decadence? The delicacy you see before you consists of three layers of chocolate meringue covered with a chocolate crème patissière and topped with chocolate shavings, (Nigella suggests pistachios but I was deep in chocolate and there was no turning back). Ms. Lawson calls it chocolate heaven and I hope you’ll all agree that ‘heavenly’ is an accurate way to describe the entire meal. Thanks for coming!

Now I’d like to invite you to move the party along to the dinner tables of:

Nicole of Pinch My Salt

Peabody of Culinary Concoctions by Peabody

All looks amazing. The gooeyness of that chocolate stack deserves an entirely new word.

Didn't know about the meme, but hopefully you can consider my Moroccan effort as the quintessential "one I prepared earlier".

Happy Birthday Darling! <3 I hope your special day was everything you could have wished for and more! xoxox

I'll be considering a special menu, taking into account all of your favourite foods for this event. Stay tuned this will be interesting! ;)

Kudos on having pix for all your food for this meme :)

Happy b-day! And all I can say is YUM!

Happy Birthday Brilynn!! You really outdid yourself this time... the food looks fantastic!!!

The chocolate stack looks so tasty - I want some. Please?

Wow - I wish I could have come to your birthday dinner! It looks amazing. I hope you had some help so you weren't slaving away in the kitchen by yourself on your special day! :)

All of that look truly sumptuous! How wonderful it is to have dinner at your table!

What a meal! Wonderful treats indeed!

I wish I was there for your b-day cake celebration! Happy Birthday!

That looks too good to be true. I think I want to make my own birthday cake this year too.

Oh my! All that food looks yummy & I'll bet you had a great time!
Cheers,
Heather

Looks fantastic. I have no idea what I will serve...this may take awhile.
Excellent looking cake!

Happy belated birthday Brilynn!! What a fantastic feast! Everything is completely droolworthy for sure =) My God. That cake! Wow! You did a fantastic job and I hope your birthday was a terrific day :D

Happy belated birthday hon! And love the meme answers - especially since it was accompanied by those delicious lookin photos!

Happy Birthday!! That's a lot of food for me, but then look who is talking!:)) Have fun..

It's a good thing you were in charge of serving order for these dishes because I might have started with the cake and missed that pièce de resistance and that would have been a shame. And the parsnip & apple pancakes are a perfect start! I would enjoy your dinner sooo much!

Oh. My. Lord. That was incredible!!! I feel weak after looking at those photos! :):) Happy Birthday!

Happy belated birthday Brilynn, the meal sounds delicious! Thanks for the tag and sorry that I haven't had time to come up with something yet!