Comfort In A Bowl 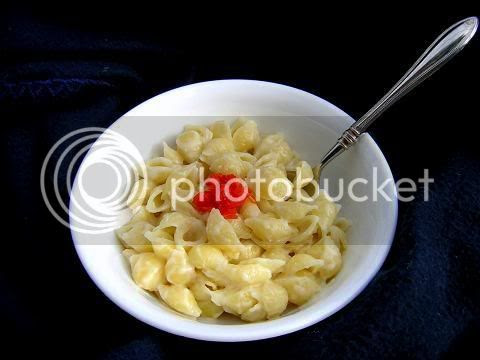 Ivonne of Creampuffs in Venice and Orchidea of Viaggi e Sapori are hosting a one off event called Dishes of Comfort. They’ve asked that we post about a special dish from our youth that brings back wonderful memories when we have it now. The first thing that came to mind was macaroni and cheese, but I thought I should be able to think of something better than that. Mac and cheese is so simple. The more I thought about it though, the more I kept coming back to macaroni and cheese.

I remember when I was in kindergarten and only had half days of school. I would come home at lunchtime and have Kraft Dinner while watching Mr. Dress Up. Whenever Mom gave me a choice in what my lunch would be, the answer was always KD. A few years later while at my best friends’ house, we made Kraft Dinner for the first time all on our own and were so proud of ourselves. I remember how many times we read and re-read the directions on the box and how we went running to her Mom every 30 seconds to clarify something. Was the water boiling when we saw little bubbles? How do you measure butter? How much salt do we add? How much should you stir the pot? When were the noodles done? I think it took us almost an hour to make macaroni and cheese, but we were so happy with the results.

Even with our amazing success, it took a while before I became confident enough in my ‘chef’ skills to make it on my own. In the meantime Dad would make it for me and he would often add extra cheese, spices and whatever else he felt like putting in. He’d let me help out too, I was always the official noodle tester, letting him know when the pasta was done. Gradually I became more comfortable making it myself. I no longer had to measure the salt or milk or butter. I also started adapting the recipe to suit my liking. And I liked cheese. I would grate as much extra cheese into the pot as I could. I think sometimes there was more cheese than pasta.

Later, I graduated from modifying Kraft Dinner to making my own macaroni and cheese. I liked to make it with shell noodles because the cheese would get trapped inside the shells, exploding in gooey goodness in your mouth. It got to the point where I had reached what I thought was macaroni and cheese perfection. Then, in my first year of university, in residence and without the luxury of a stove or fridge, I reverted back to Kraft Dinner. But KD had changed! Now there was Easy Mac. Everything was contained in the package. I only had to add water and heat in the microwave. I was in heaven. Late night snacks or mid day munchies were satiated in less than 5 minutes. Although it wasn’t my macaroni and cheese, it was an excellent substitute for the time being.

I was only in residence for one year and after that I was back to making my own version of KD with shell noodles. I branched out though too, sometimes I would add veggies, like broccoli or peppers, (hot ones are especially good). Chorizo sausage was often seen in my bowl and if there was leftover steak in it went. I also really began to experiment with different kinds of cheese. By experimenting I mean more than simply exchanging mozzarella or extra old cheddar for regular cheddar. Right around the corner from my apartment was the best cheese store in the world, Global Cheese, (76 Kensington Ave, Toronto) and it introduced me to cheeses I never could have imagined. If you love cheese, this is the place you want to be. They’ve got everything. The whole store is cheese and the people who work there are great. They let you sample whatever you want and always have suggestions. My macaroni and cheese was reborn with smoked gouda one day, maasdam another, the possibilities were endless!

This was also around the time however, that I was starting to experiment more with cooking in general. As much as I loved my mac and cheese I made it less and less as I began to explore the range of cuisines that Toronto had to offer. Sushi, red bean buns, Korean bbq, bubble tea, fresh made pasta, street meat, schwarma, jerk chicken, (from Jerk Spot, oh the memories), patties, doubles, pho, the list continues to grow and I continue to seek out new foods wherever I go. No matter what else I’ve tried though, if I’m having a bad day or a good day or I just want something easy, nothing beats a big bowl of my own macaroni in cheese. It’s my ultimate dish of comfort.

Thank you so much for taking part in this event! I LOVE macaroni and cheese and I can see why you find it comforting.

And I can't believe you used to go to Global Cheese!!! That's so cool.

What a great memory! I have a mac and cheese recipe handed down to me from my grandmother who got it from her mother. Total comfort food! I have been on a comfort food kick the last few days myself.Lots of soups, breads and casseroles.Tonight it is cabbage rolls and creamy mashed potatoes!

brilynn, sometimes the simplest things in life are all you need for happiness :)

Hurrah, a fellow Kensington-er! And Global Cheese fan! I'll be telling my friends about your blog.

Definitly comforting. I'm sicker than sick and this looks great...I would love to have some.

Great story of your comfort food, I can see how this would hold a place in your heart :D

Mac and Cheese is definitely up there on the comfort food list for me. I am still experimenting myself on the perfect combination of cheeses - and although I haven't hit it quite right yet, the ride has been delicious. :D Love this post, it brings back many memories of myself as a young girl just starting to cook and Kraft mac & cheese was one of the first things I ever made for myself too! :D

I love mac and cheese... It is comforting for me although it was not my childhood type of food. :)

Thanks for sharing this lovely memoery. I love the fact that just about every culture has a version of noodles and cheese and yours is very very tempting!

this post made me crave mac & cheese so badly that i just ran out to the store, bought a box of velveeta mac & cheese and ate the entire thing. i blame you for any weight gain that may ensue. :)

Your story is so beautiful... and your dish is very interesting. I love cheese and I think I will probably like it. Thanks for participating.
Ciao.

I love mac n cheese, especially made with shells!

In college I lived on Kraft Mac 'n Cheese. 25 cents a box - can't beat that. It is still my favorite. I've tried home made, but it just isn't "orange" enough. LOL Good post.

Thank you for sharing Brilynn - What a wonderful post of growth and gaining kitchen (and life!) confidence. I remember when I made KD, perhaps much too young, and spashed boiling water on my stomach. It took me years to feel comfortable with draining the mac. Guess we've both come a long way. Congrats!