Sugar and Spice and Waffles Are Nice 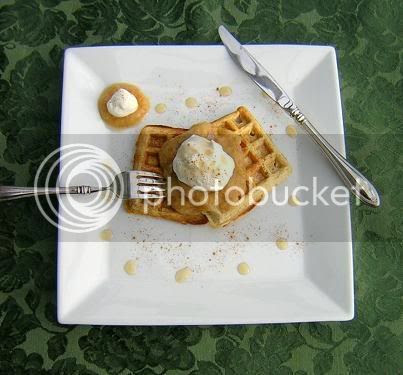 Some mornings cereal is just not going to cut it, toast is boring and you're tired of eggs. What to do, what to do? Well, if a nice friend had brought you over a basket of pears earlier in the week and you had made spiced pear sauce the night before then the correct thing to do would be to make waffles. But not just any old waffles, buttermilk waffles smothered in pear sauce, with a dollop of maple whipped cream, a sprinkle of cinnamon and drizzle of Canadian maple syrup. Or at least that's what I would do.
It just so happens that earlier this week a friend did bring me over a basket of pears, an actual wicker basket, only in the country. The pears had also been picked, fresh from their tree. The basket sat on the counter for a few days and I picked away at it everyday, but the thing was huge and I wouldn't be able to finish them all especially since I'm going away for a few days. There was no way I would ever waste pears though, so I turned the rest of the basket of pears into spiced pear sauce, with cinnamon, nutmeg and allspice. The sauce is going to be great on ice cream, in baked goods and would probably be pretty good with a roast of pork too, but for today it was waffles all the way. 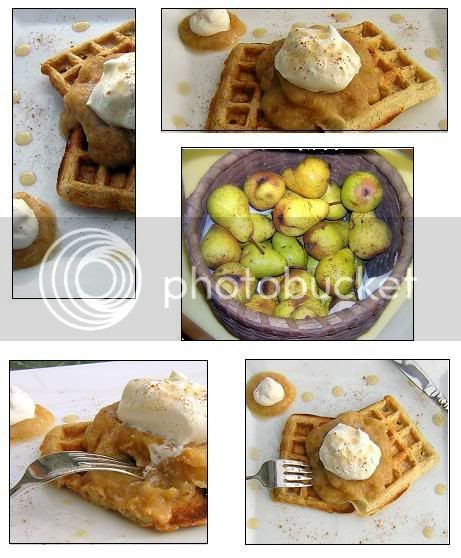 The waffle maker is a new thing for me, I just got it a couple weeks ago. Now I'm sure there are plenty of fancy schmancy waffle makers out there with all sorts of different plate attachments and stuff like that, but my waffle maker was $7, it works just fine and I like it. But back to my breakfast... Most mornings I just want to eat without any fuss and since I'm usually making something just for me I don't really have the need to make it look pretty. This morning, however, since I was making waffles and I knew everything was going to taste sooo good, I wanted my plate to look just as good to my eyes as it did to my stomach. After creating my plate art I almost didn't want to ruin it by eating it. Who am I kidding? I couldn't wait to dig in, and I assure you it was every bit as good as I made it out to be, and more. If that was the last meal I ever ate, I think I would die happy. 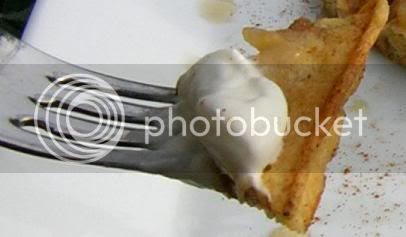 Labels: Fruit...sort of, Sweets of All Kinds

Those are some yummy lookin' pears!

Your first picture (the main one) is the best picture you have taken yet... good job...

This is a first. I've never craved waffles before.

I want me some waffles!

Waffles are my favorite, followed closely by French toast. And I do love pears! Does the sauce keep long?

I usually freeze the pear sauce and then I can just take it out whenever I need it and it lasts a long time.

I LOVE your photos - those waffles look amazing.

Waffles for breakfast...haven't had that in AGES! Delicious looking photos.

RYC: I'm always up for tasting something new, I just don't think I could make an entire tub of this to try it.---Neither could I, which is why I did a half batch that amounted to a very meager amount. I got a kick out of the reactions to the gelato because I think the major difference between biting into a candy bar and eating gelato is that gelato melts and coats your entire mouth. There's no escaping! ;-)

Your waffle photos are absolutely beautiful! Now I really want to make some of your pear sauce!!

What a nice way to jazz up the waffles!

I haven't had waffles in a very long time. It's been even longer (years!) since I've had homemade ones. Where did you find this $7 waffle iron? I dfinitely need to find a cheap kind like that and then I can try your delicious looking waffles.

Although I hate to admit it, the waffle maker came from Walmart... but how can you beat $7? And it has produced so much happiness..

yum! makes me want to break out the waffler!

Thanks for your entry to DMBLGIT - have a look at all the entries here.

Oh, to have a wicker basket of pears delivered by a neighbour . . . sigh!