Kitchenaid Mixer: Worth Its Weight In Gold 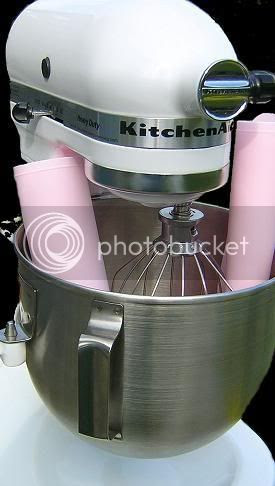 I’m back from a visit to Connecticut to see my brother and his family and I’ve got a new toy!!! Yes, this warrants three whole exclamation points, one would not suffice. As you can see, I am the proud new owner of a Kitchenaid mixer, (and some pink baking sheets, but those were just a bonus). I’ve wanted a Kitchenaid for quite some time now and this one was a steal of a deal, I couldn’t pass it up. The only problem is that my Kitchenaid doesn’t have a name yet. Ever since I opened the box I knew I’d be spending a lot of time with the new guy, so I feel he needs a name. This isn’t something I can rush into, I’ll have to mull it over, but I’m open to suggestions. I know we’re going to get along just fabulously, he’s already helped to produce bread and a chocolate cheesecake while still in Connecticut. I’m back in Canada now and he’s resting comfortably on my counter after the long trip, very happy in his new home.

Other than the bread and the cheesecake I didn’t really do any cooking while I was away. I spent the entire time in Connecticut being entertained by my little nephew, whom I will refer to as the Baby Genius. Baby Genius is two years old and his vocabulary and abilities just blow me away. Case in point: His neighbour was out watering her flowers and he told her “your chrysanthemums are exquisite!” I have to look up how to spell half the words he comes up with. Amazing.

I’m also impressed with his adventures with food, he’s a budding foodie and he doesn’t even know it. Unlike a lot of kids he’s not a fussy eater at all. He seems quite content to try anything if you tell him it’s good. While I was there I fed him some lobster and lamb, both of which were fine with him. He seemed to like the taste of the lamb a bit better and asked for more of it, but thoroughly enjoyed the whole production of making the lobsters and watching us eat them. We let the lobsters walk around on the kitchen floor a bit before they met their maker, this made Baby Genius squeal with delight. He would approach them with caution and then run away when they moved. During the meal he was constantly asking what we were doing, why were we breaking apart shells, what was inside? It was a big spectacle for him. And I have to admit, I always enjoy the show too.

Dinner wasn’t the only time I got to introduce Baby Genius to some new combinations. He often has Cheerios or oatmeal or cream of wheat for breakfast, but one morning I added some blueberries to his bowl to see if he’d notice. He looked at the blue blobs floating amidst his Cheerios and asked what they were but didn’t object to having them spooned into his mouth. He takes it all in stride.

The only thing that saddened me at first about Baby Genius was what I thought a lack of interest in food. Despite his willingness to eat whatever he was given, it was usually a struggle to get him to sit down and eat an entire meal. But then I started to think about this a little more and I realized that Baby Genius had outsmarted me again. I could learn a thing or two from him. He always ate what he needed to but knew when enough was enough. He wasn’t interested in shoving an entire chocolate cheesecake in his face just because it was there, (unlike some people…). And just because he attentive at the table didn’t mean he wasn’t enjoying the whole world of food. One morning Baby Genius was sitting in the kitchen with all the cupboards open, playing with some bowls, pots, a strainer, some spoons and a spatula. My brother asked him if he wanted to come to the table to eat some breakfast. He said no, he was busy cooking. I went and sat down beside him on the floor and asked him what he had in his strainer and what he was making. He looked at me and said “It’s not a strainer, it’s a sieve. I’m making things”. Once again, the little guy had bested me. Of course it was a sieve, how silly could I be? Baby Genius loves to spend time in the kitchen puttering around, pulling everything out of the cupboards, making things with his bear, (appropriately named Bear). Baby Genius and Bear entertain themselves for hours on the kitchen floor and they can’t be disturbed to do silly things like eat breakfast or go on an adventure. Whenever his mom would go into the kitchen Baby Genius would ask what she was doing and if he could help. Then he would stand on his stool and help his mom with whatever she was doing, telling her how he thought it should be done. It was all very heart warming, a blossoming foodie.

Anyways, that’s enough Baby Genius boasting for me. I had a good trip and I’m very, very, very pleased with my new Kitchenaid, (three exclamation points, three verys… it’s a big deal). All that’s left is to give my new guy a name and to put him to work. There will surely be more to follow soon.

Love the kitchenaid ... I've been coveting one for quite some time and like you can't quite bring myself to spend the coin. You say it was a good deal in the US? How much of a good deal are we talking here? I'm down in the states every once in awhile!!

There are no words with which I can express my envy.

It is beautiful! *goes off to sigh and pine*

I've had my KA for over 10yrs. I love it. Btw, on my next trip to TO, I'm going to have to try that Empanada place. I miss good authentic mexican food.

I love my kitchen aid mixer! Thanks for visiting my blog ,BTW. I always keep my KA on my kitchen island so I will always remember to use it. My hubby just used it to roll pasta .
Making fresh Pasta

Oh, I know how you feel about the new Kitchenaid! I felt a little sad for my beautiful old Sunbeam when I bought it, (which I will never give up!) and so I made a few Rookie Cookery comix about it! (on my site)
Glad to see I am not the only one who gets excited about a kitchen appliance.

It's fun to make the aquantence of your blog, and I hope to see what you make with your new "toy". Your apple waffle extravaganza looked awesome.

Oops. I mean waffles and PEARS, spiced pear sauce to be precise.

Are you going to share your recipe? (hint, hint).

I don't have such a nice mixer - mine is a rather naff hand held one.
Maybe in my next house, with a bigger kitchen...

The pear sauce doesn't have much of a recipe... I had a basket of pears so I just cut them up, threw them in a pot, cooked them until soft and then pureed them and added cinnamon, nutmeg, allspice and sugar, in no particular quantities, just until I thought it tasted good.

Kitchenaid Mixer = Culinary Bliss. Congrats on your new kitchen helper. I'd be lost without mine. :)