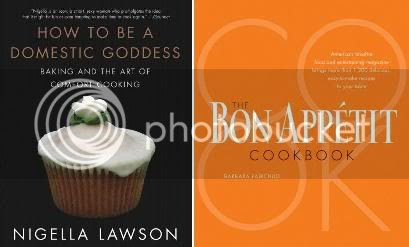 Today was great. I woke up excited as a kid on Christmas morning, the cookbooks I had ordered were coming today! Unfortunately, the mail does not arrive until around 1:30 so I needed something to keep myself busy until then. I ended up out in the workshop making a little salt bowl on the lathe. It was a good way to spend the morning and before I knew it the mail had arrived. I opened the box and eagerly pulled out the Bon Appetit Cookbook and Nigella Lawson’s How To Be A Domestic Goddess. The Bon Appetit Cookbook is a hefty volume of almost 800 pages and is a compilation of all their best recipes. My only complaint is that there aren’t too many pictures, but I can use my imagination, (calzones with cheese, sausage and roasted red peppers anyone?). Nigella Lawson’s book more than makes up for the lack of pictures in Bon Appetit, it’s beautiful. The majority of recipes are accompanied by a picture, (the gooey chocolate stack is calling my name) and possible variations are offered for many of the recipes. I proceeded to spend most of the afternoon reading through my new treasures. I love cookbooks. Even though I know I’ll never get around to making half of the recipes, (or even a quarter of them, the Bon Appetit Cookbook has over 1200 recipes) I just like reading through them, looking at the pictures, getting ideas for ways to improve on dishes I already know how to make.

Nigella’s book is basically food porn with its glossy pictures of oozing layer cakes, fruit filled pies, gooey brownies, cupcakes so appealing that they’re worthy of being in a museum, elegant pistachio macaroons and adorable mini pavlovas. It makes me wish there were more holidays (a National Dessert Day perhaps?) so that I would have an excuse to make all of these desserts. Unfortunately, I know that if I make something I will inevitably eat all of it. That doesn’t necessarily stop me from baking, but it might slow me down a bit. Not today though! Mom has been pining for a sour cherry pie ever since she brought home a tub of sour cherries a month or two ago, pitted and ready for a pie. I decided to try making a whole wheat crust and found a suitable recipe from Bakingsheet (http://bakingsheet.blogspot.com/2005/08/whole-wheat-pie-crust.html) and found that it came together quite easily. I thought that the whole wheat might be a little more difficult to work with, but no complaints here. The filling was pretty straight forward, just a whole lot of cherries, some sugar and a little cornstarch to thicken it. It was cooling on the rack by the time Mom came home from work, she was thrilled. 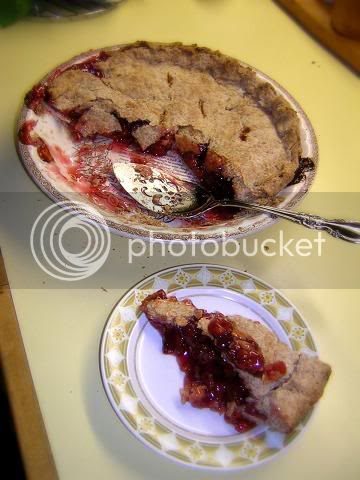 Dinner was already planned for tonight (homemade pasta sauce with tomatoes from the garden, venison meatballs and pasta) but I’ve been pouring over the Bon Appetit Cookbook to find a recipe for tomorrow night. The problem? How do you choose from 1200 possibilities? The book is divided very nicely into categories, making it a little easier to find something if you’ve already narrowed down your choice to a chicken dish or a fish dish depending or whatever you have on hand. Of course sometimes you don’t know what you have because your freezer is a disaster and heaven only knows what’s lurking inside. Yesterday I spent about 3 hours fixing that problem. I cleaned out the entire freezer, all the while cursing the person who thought that a giant box with a lid on the top was a good design for storing food. Does it make any logical sense? NO. Anything that ends up on the bottom is bound to stay there because most people can’t even reach the bottom of their freezers and have no desire to try since it’s easier to grab something off the top, or in the case of my Dad, to go to the grocery store and buy something new. I should really make my fortune designing smarter freezers. Until that time though, I will suffer with the one I have and try to make it more functional by setting up an inventory. After throwing out a lot of mystery food, (when you can’t even tell if it’s fruit or meat, it should have gone long ago) I arranged the freezer into as much order as possible and created a list, divided by category, of everything that was in there. I posted this list to the fridge with spaces to add more and instructions not to buy anything new until checking the inventory first. One day into it and Dad has already chosen not to abide by my new rules by buying a new bag of hamburger buns. Had he of checked the inventory he would have known that there are already two bags of buns in the freezer, one white and one whole wheat. I will persevere though, I’m confident that my new system has to be better than the old one, if only I can convince others of the same thing. I still have to decide what’s for dinner but at least now I know what I’ve got.

That pie looks so tasty! I love that you made a freezer inventory...I do the same thing occasionally!

Yummo - that looks yummy! I love things that are just that little bit sour/tart and sweet all at the same time.