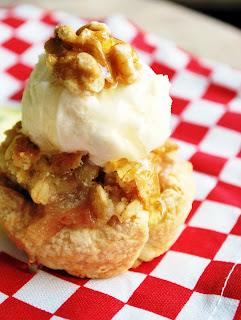 This Mini Apple Crisp Pie, topped with Vanilla Ice Cream, Walnut and Honey was born out of necessity.  I didn’t want to make it, but I had to.  I needed reasons to use up ice cream, aside from just shovelling it into my mouth.  For some silly reason, my condo building is without power today from 9am-5pm so I’m currently sitting at Starbucks trying to kill time.  About a week ago, signs went up in the elevators in my building, stating that the power would be off today and to take appropriate measures to assure that none of your food spoiled during the outage, which would shut off all fridges and freezers.  Is a week really enough notice for such a thing?  Why wouldn’t the powers that be, consider doing their repairs in two, four hour spurts so that everyone’s lives were less disrupted?  Apparently I’m the only person that employs logic when making decisions.  And of course, this is occurring on one of the few days that I get to leave work early so instead of being able to spend my free afternoon baking, I’m sitting in a noisy Starbucks.  I didn’t manage to snag one of the comfy armchairs either so I’m sitting on a wooden chair near the entrance where a cold wind blows in every time someone opens the door.  It’s not pleasant.

What all of this means is that for the past week I’ve been eating a lot of ice cream because I can’t bear the thought that it might melt and be spoiled if the power outage drags on.  I thought I should attempt to pair the ice cream with something, so I made apple crisp.  And since I had some leftover frozen mini pie shells that I didn’t want to thaw and refreeze, I scooped the crisp into the pie shells and topped them with ice cream, walnuts and honey.  And since tomorrow is 3.14/Pi/Pie Day, it seemed very appropriate that I tell you about my born out of necessity mini-pies.  Happy Pi Day everyone!
Posted by Brilynn at 6:32 p.m.

Honestly though, it makes me want to empty my fridge and save some of my delicious food! lol

Great blog; happy I found you!

this looks great and must be so yummy!