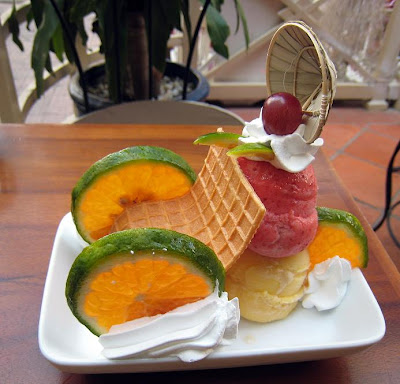 'Cyclo' ice cream sundae at Fanny
In the past 10 months I’ve set foot in 10 different countries. I’ve noticed that when I’m telling people about the different places I’ve been, one country seems to get more attention than the others. Everyone seems to be intrigued by Vietnam, there’s something mysterious and exotic about it that piques curiosities. For me, it was all about the food. I’d had a craving for Vietnamese Spring Rolls since the day I knew I was going to Vietnam. They were one of the first things I ate as soon as I could find a market. I wandered to the food section, (past 19 vendors selling knock off tshirts and knick knacks) and plunked myself down in front of the first stall that I saw with a woman rolling up fresh spring rolls. I pointed and the next spring rolls came to me. That’s pretty much how I did most of my ordering in Vietnam. I saw something I liked, I pointed at it and a few minutes later a similar plate would be put down in front of me. It was a good system. 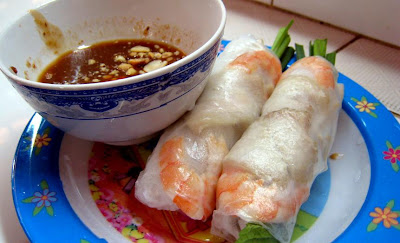 Fresh Vietnamese Spring Rolls
Ice cream might not be the first thing that comes to mind when you think of Vietnam but Fanny ice cream parlour came recommended by Dorie Greenspan and I’d have been foolish to ignore any advice given by such a smart and wonderful woman. Fanny has a few locations around Vietnam and I managed to get to two of them, (in Ho Chi Min City and Hanoi) and am so glad that I did. When I arrived in Ho Chi Min City, (HCMC) it was approximately a million degrees outside, humid and I was sick for the first time in South East Asia. As I lay on my hotel bed, feeling like death warmed over, all I wanted was something cold and delicious to make me feel better. When I managed to muster enough strength to drag myself out of bed, I headed out for ice cream. 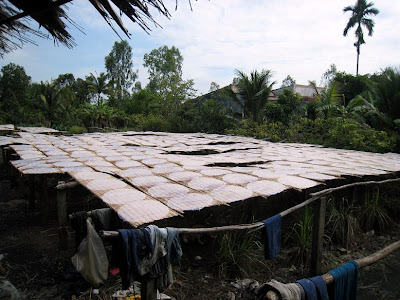 Rice Paper Drying in the Sun
I didn’t realize what an adventure it would be to get there. I had been in large South East Asian cities previous to HCMC, I’d been to Kuala Lumpur and to Bangkok but for some reason, HCMC overwhelmed me. It was the scooters. HCMC has an insane amount of scooters that dominate the roads, the sidewalk, everywhere and don’t abide by any sort of laws or regulations. One local joked to me that in the morning scooters drive on the right side of the road and in the afternoon they drive on the left. I’m still not entirely sure that was a joke. Crossing the road should be an Olympic event in HCMC. Traffic lights mean nothing. 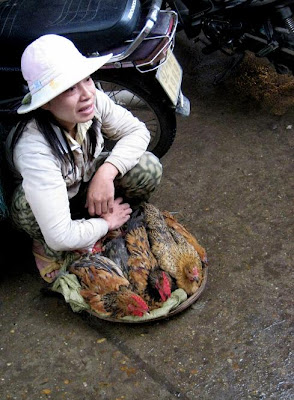 Chicken For Sale at the Market in Hoi An
The best way to cross a street is to look in the direction you want to go and to walk there without hesitation. The scooters will swerve around you. It’s true, they will. It’s also true that I saw three scooter crashes in one day. Anyways, after crossing multiple streets and being sure I was going to die each time, I arrived at Fanny and it was worth it. Besides all of the amazing homemade ice cream flavours to chose from they also had the most interesting sundae options. I chose a ‘Cyclo’ which is pictured here and is composed of a scoop of strawberry, mango and coconut ice cream, orange slices, whipped cream, waffle cone and a grape and it was as fun to eat as it was to look at. 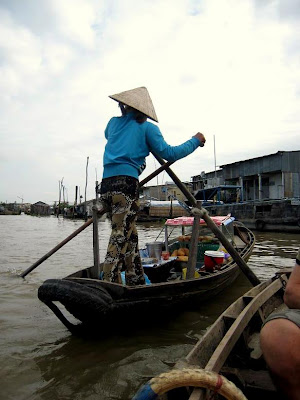 Boating in the Mekong Delta
After the insanity that was HCMC I headed south to the Mekong Delta, a land of floating markets, long boats and some amazing scenery. The floating markets were an experience unto themselves. Some of the boats remained stationary, others brought their goods to you. Some specialized in one item, (like watermelon) others offered a few different items. And how do you tell what each boat is selling? They hang a pole from the bow or the stern and tie on one of each item they have on offer so you can see from a distance if you want to travel to that boat. It was really interesting to see. On the way back from the floating markets we stopped at a small restaurant for lunch. 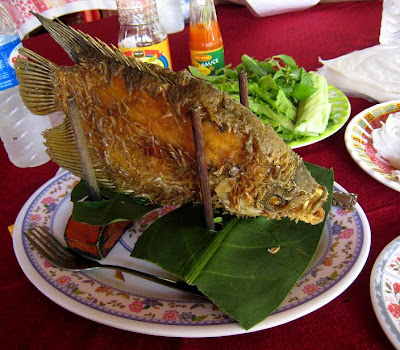 The menu was limited, but one of the offerings was fried elephant ear fish. I jumped at the chance to give it a try and when they brought out a whole fish I was certainly glad I did. Along with the fish came all the fixings to make my own cold rolls, complete with fresh herbs to customize it the way I wanted to. My dining companions, (who had all opted for safer options that they recognized) eyed my dish with curiosity but seemed wary of having to disassemble a fish on their own so I started doing up cold rolls for them to try as well. I’m always surprised by how little some travelers are willing to try. The way I look at it, if I’ve come all the way to Vietnam I want to experience everything it has to offer. Some people just want a sandwich. It baffles me. 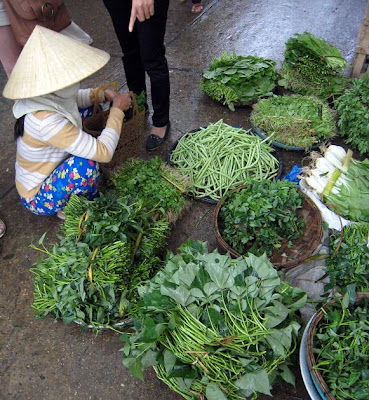 Fresh Herbs and Greens at the Hoi An Market
Since Dorie’s recommendation of Fanny had been so great, I decided to follow her advice once again after leaving the Mekong Delta and heading north to Hoi An. She had attended a cooking class there and I was determined to do the same so it was off to the Red Bridge Cooking School. Dorie has a wonderful account of the experience there and I’d have to say that mine was quite similar. Our menus were the same and as she mentions, one of the most interesting parts was seeing how rice paper is made. I had actually had a previous demonstration of this while traveling along the Mekong Delta. There they made mass quantities of rice paper wrappers and showed us how they dried them in the sun, (along with their laundry) before packaging them up to sell. 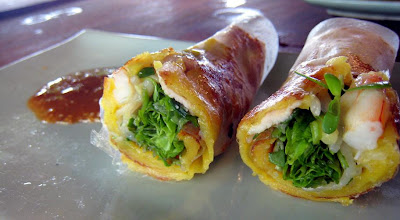 Seafood Pancakes Made at the Red Bridge Cooking School
As with my cooking class in Thailand, this one included a market tour. The only bad thing about markets in foreign countries is that I can’t bring them home with me and there’s always so much that I don’t get to try. And then there’s the things that I try and love but then can never find again. I think that’s what spurs me on to travel more because there are so many things out there that I never see at home. 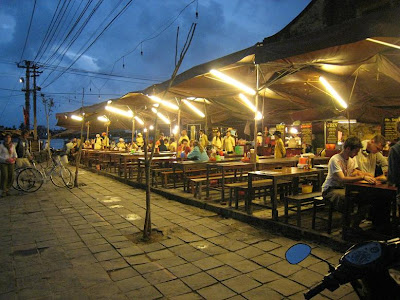 Outdoor Food Stalls
If it’s food you’re looking for, Vietnam delivers. As with most of the places I visited, I felt like my time there was too short. There were lots of places I still wanted to explore and wasn’t able to. That probably means I just need to start planning another trip… 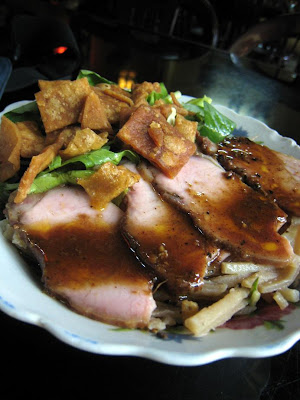 How cool! I love all the photos!

wow! i love the presentation of the ice cream!

Amazing, Thank you so much for sharing.

I, too, loved the food in Vietnam. It was a revelation from humblest street corner braizer to fancy restaurant. and the ice cream was amazing. I liked Fanny's (in Hanoi), but was blown away at the ice cream at Piano Kem in Hoi An.
Thanks for triggering all my delicious food memories of that trip.