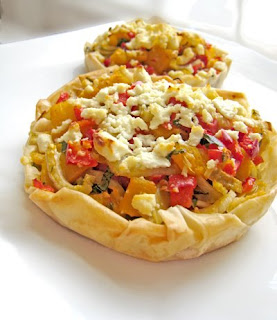 It seems as though we’ve skipped spring altogether and launched right into summer. If that means no rain, I’m ok with it. I hate rain like nothing else. Luckily, there hasn’t been too much of it and it’s been pretty warm in the city which means that bike weather is back. When I lived in the country, biking was a leisurely activity whether on or off road, in the city it’s always an X-treme sport. Yes, capital X to the treme. The hazards that you deal with in city biking far outweigh anything you might encounter in the country. In the country I might have to avoid the occasional car, (which I will probably wave to because I know them) sometimes a squirrel, (which I will probably wave to because his name is Nutkin) maybe a dog if it’s a bad day, (but it won’t really be that bad, cause I’ll probably just wave to the dog because I know him too). In the city I always have to be on guard, ready to defend myself against things like crazy inept city drivers, (in cars, trucks, buses and transport trucks) streetcars, (and possibly even worse are the tracks they leave all over the place) other bikers, (you’d think we’re all in this together, but some bikers are nut-jobs) pedestrians, (and their various accoutrements) and random other dangers like construction, potholes, city animals, street lights and a lack of bike lanes. 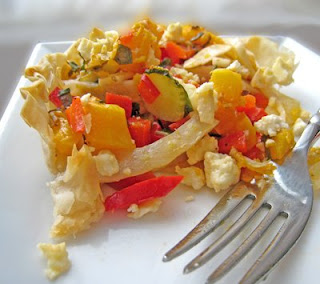 As if all of that isn’t bad enough, I live in the bike theft capital of the universe so if I wanted to continue to put my life at risk on my bike I have to keep it chained to me at all times. I swear, just stopping at a traffic light could leave you susceptible to having your bike stolen while you’re still on it. One minute you could be riding along and the next minute you’re on the ground, pedaling the air and wondering what the hell happened to your bike. Despite all of this, I put on my helmet, warmed up my bell dinging thumb and headed out for a ride today in the sunshine. I made it home in one piece, although the sun got the best of me and I’m a horrendous shade of pink this evening. What does all of this have to do with the vegetable tart you’re looking at? Nothing, but I wanted to remind people to be nice to bikers and the tart seemed like a nice backdrop to do so. And while I’m ranting- could grocery store employees please be gentle with my produce? Eggplants are not to be hurled like footballs. Thank you. 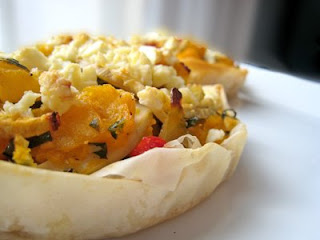 The tart is actually Anna Olson’s Roasted Garlic Vegetable Tart which is from her new show Fresh and is the April recipe for the Cooking Club Challenge on the Foodtv.ca blog. The tart requires you to make much more garlic oil than you will actually need but it’s not hard to find other uses for it. Or, if you’d rather, you could probably just roast some garlic, puree it and then only add as much oil as you need to brush it onto the phyllo. I also opted to top some of my tarts with goat cheese instead of feta and it was super. I realize it’s not exactly butternut squash season right now, but this tart lends itself well to substitutions, so whatever looks fresh would probably be good. Oh, and next time I’d add bacon. Definitely bacon.

For roasted garlic oil, preheat oven to 375 F. Peel garlic cloves and place in a baking dish. Cover with oil, stir to coat, and cover dish. Bake until garlic cloves are golden, about 40 minutes. Let cool.

Toss squash with 3 tbsp garlic oil and season lightly. Bake squash, covered for 15 minutes at 375 F, then uncover and reduce temperature to 350 F, and bake until tender, about 20 more minutes.

To assemble tart, increase oven temperature back to 375 F. Spread out 1 sheet of phyllo (keeping other sheets covered). Brush lightly with garlic oil and lay another sheet over. Continue layering remaining phyllo sheets, brushing with garlic oil between each layer. Fold phyllo in half lengthwise and gently lift and place in an ungreased rectangle (4-x- 10 inch) removable-bottom tart pan. Spoon squash filling into tart shell and crumble feta over. Bake for 20-25 minutes, until phyllo is a rich brown.

i want the cupcakes in your logo header!!

Biking in all cities is an extreme sport. In Boston I wouldn't even attempt it -- Boston drivers are famously rude and are a real hazard to bikes.

Haha, I agree with Bren, those cupcakes look might tasty. So oddly shaped too....makes them that much tastier I suppose.

Your tarts look tasty as well. Nice and crumbly and different texture-y, perfect for spring!

I had no idea Canada is the biking capital of the universe. And here I was thinking it was LA (or at least Copenhagen...LOL)

That tart is lovely! Enjoy the weather!

Ouch, that's sad.. I thought crime was relatively low there :( I hope the warm weather will help release positive vibes to the bikers :)

I'm sure this challenge was a breeze for you!

this looks like a phenomenal savory tart recipe! And take care on that bike, will ya!

Yummmm, I can't wait until Passover is over so I can make these!!

I enjoy any savoury phyllo pastry tart but yours looks darn good! And with Feta...yummy!

This does sound like a greaqt dish that needs to be on my menu plan. I remember the days of riding my bike in the city. My husband finally took my bike away from me when I was 7 months pregnant and he would never let me get a bike seat for my daughter. I suppose he was right, but it is good excercise:D

That tart looks so, so good! The crust looks very light.

The addition of bacon is always a good idea. :)

Looks like such a tasty, simple tart. Glad you're having nice weather up there!

I had to laugh, because I really want to start riding my bike to work, but my husband won't let me because of all of the crazy drivers. It really is crazy out there!

i ride my bike everywhere and i see it as an adventure, tho some routes are definitely more adventuresome than others. i definitely have gotten good yelling at cars! and i thought vancouver was bike theft capital! the tart looks amazing and since i've got phyllo in the freezer this might just be the recipe i try.

Brilynn, you are just too funny! I've always been afraid to bike ride in the city, I am such a baby! :)

That tart looks spectacular, I so need to make this! I keep forgetting about that cooking club! Maybe it's because I'm not quite sure about Anna's new show, perhaps it'll grow on me.

oh yeah, bacon will be a good addition. :) What did you do with the rest of the fennel?

These look great! I love phyllo dough! It is tricky to play with but the outcome is always yummy. Nice recipe, too! Thanks for sharing!

That tart looks tasty. I really enjoy roasted squash and red peppers and then combine them with phyllo dough and feta...mmm...

We rented bikes when we visited Vancouver a few years ago. We loved it! And I'd love one of those tarts.

That looks so good!
I wish that we lived in more of a biking community.

Bikes and cities - probably not really a good combo. Our youngest doesn't own a car, bikes or walks everywhere.
Love this tart and the garlic oil! I think I need a little of the garlic oil!

Brilynn, your tart is good. That's just a compliment about your tart.

That is one fine look vegetables tart. I love working with Phyllo dough.

The bike theft capital...interesting.Start carrying a hockey stick when you bike...might scare them off.
Good looking tarts.

Lovely presentation! I'm a vegetarian and always on the look out for a great recipe.

You be careful out there! I ride my spinning bike a few hours a week in the safety of my home and would never venture out on a "real" bike :)

Hahaha! It's taken me 5 minutes to stop laughing enough to type this comment. That visual I got was too funny.

Really nice tarts. It looks like a great Springtime recipe.

I've only caught a couple of episodes of Fresh, but I really like it. Mind you, I was a bit fan of Sugar as well...

how can you not like rain ???
i love the rain ... only if it doesn't do crazy on me. the tart looks irresistible.

That tart looks so crazy delicious!!!! As for bikes...scary in an urban setting in my opinion!

I haven't seen Anna Olson's new show yet. Judging from this delicious looking tart, I should make the effort.

I know what you mean about the drivers here (especially now that gasoline prices are up - drivers are even crankier and crazed than before). That's why I think a loud bell and a rear view mirror are essentials for my bike.

Isn't it great to be able to ride again? It's SO much easier and faster than tripping on snow and ice.