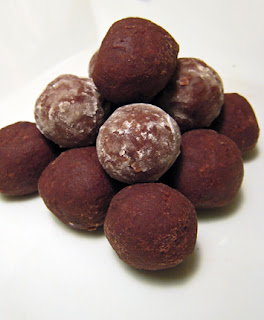 In my last post I featured two blogger recipes; Ivonne’s Tiramisu and Anne’s Swedish Meatballs but those are only a couple of the blogger recipes I’ve made so I thought I’d share a couple more of them with you today.

First off we have Rum Balls from Baking Bites. I brought these to a couple Christmas parties and according to Mom “They pack a punch!” They’re rum balls, what do you expect? Nicole gives the option of making them with vanilla wafers or animal crackers, I chose animal crackers because even though they’re crushed up and unrecognizable as animals once they’re in the rum balls, I feel like they add a bit of jungle pizzazz to the end product. Plus they’re fun to play with before you pulverize them. 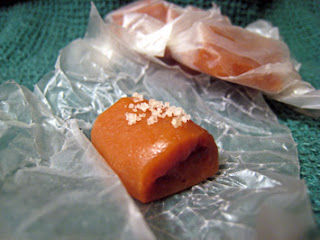 Next up we have Fleur de Sel Caramels from Cookworm. Caramel has long been a nemesis of mine and not much has changed. Despite the fact that I bought myself a brand new candy thermometer I still managed to slightly overcook these. This resulted in caramels that were a little hard on the outside but they softened up with a smidgen of jaw power. That didn't stop me from devouring them though, the taste was still great! And I’m sure anyone who’s more adept at dealing with hot sugar than I am, would have no problem with the recipe. This was also an opportunity for me to use the lemon fleur de sel I bought a long time ago with the intention of using it in World Peace Cookies, and have yet to do so, (but will one day…).

If you’ve ever made any of the recipes you’ve seen here, let me know!

Rumballs and caramels? You are officially invited to all my parties! Lemon fleur de sel sounds wonderful - I imagine it would be monumental in World Peace Cookies -mmmmm.

caramel with lemon fleur de sel sounds heavenly. Is there any leftover??

For caramels when I "think" they almost look done, I count to ten and then take them off. Seems to work. :)
I too have yet to make world peace cookies.

*wow*! Rumballs! They make me so happy!

I have never made the rum balls. But I could sure use a handful of them today. I think next you should make some margarita ones for me.

I finallymade World Peace Cookies and everybody was woved! Your caramels look gorgeous! You did it!!

Hey! Great that you drop by, hmmm I am not sure what gonna happen this daring challenge for this january but definitely be very exciting! :)

gah, sorry, messed up the link. it was supposed to say: they were so good i garnished a few of my petit fours with fleur de sel for christmas dessert!

I think you've copied my to do list!
Fabulous follow through Brilynn! And everyone of them has me dreaming and drooling.

How nice that you're actually getting to the recipes you've made a mental note to try! All of them look fabulous!

That's one of mhy plans for this year-- to try and feature at least one recipe I saw and admired on another food blog each month.

Yum. The caramel with lemon fleur de sel looked so appetizing!
I think I will make these for Valentine’s Day giveaway =)

I haven't made either of those. Your rums balls look very appetising. I thought they were truffles.

Those look amazing. I'm at work, unfortunately, and all I can think of is Rum Balls. :-D

If only you could eat what you see online; mmmmmm, guess I have to make my own. *sigh*

Bri, I have been meaning to make caramels forever, can you believe it?
I will be trying this recipe!

That looks great. I may make it this weekend!

The caramels with salt look good and sound really interesting!

I have really been wanting to try those fleur de sal caramels. Yours look perfect, even if they did turn out a little hard!!

I'm really glad you tried the caramels! Sorry they ended up a bit hard; it does take some experimenting to find the ideal temperature. You can also dip the pan in an ice bath as soon as it reaches your desired temp so the caramel doesn't keep cooking in the pan.

Those rum balls look yum. I wonder how they'd work with whisky...